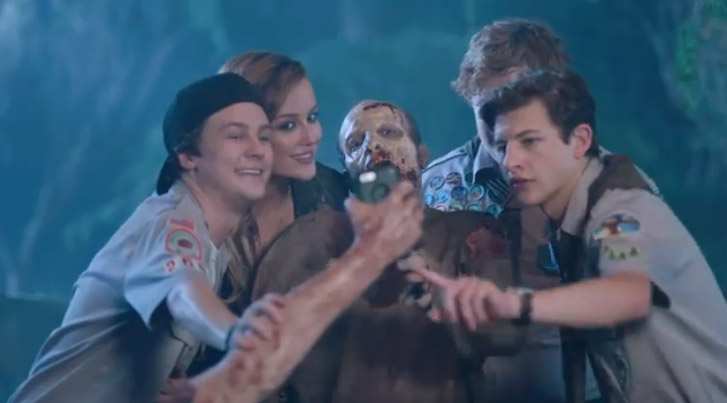 It’s 2015; if you don’t have a zombie apocalypse plan by now, then you probably have not been paying attention to many TV shows, movies, books or comics. When it comes to movies, there are a few that take the cake; “Dawn of the Dead,” “Walking Dead” and “Shaun of the Dead” all come to mind when considering the best contributions to the zombie grnre. A hilarious new addition to the zombie survivalist lexicon is “Scout’s Guide to the Zombie Apocalypse.”

Personally, I would head to the closest sporting goods store and stock up on anything and everything that is sharp or protective. Zombies need to be stabbed through the brain to be killed and they love to bite. Thus, protecting oneself by having some sort of survival strategy will be of paramount importance during the zombie apocalypse. For those without a plan, fear not—there is still time before the end of the known world to figure out what can be done, luckily, “Scout’s Guide” can help you prepare.

With a cast full of actors who are getting their first shot on the big screen, this movie will have audiences laughing for the entirety of its hour and a half run time. Spanning the course of one night, scouts Ben Augie and Carter discover tha zombies have overrun their town, prompting a military evacuation. Playing the morally neutral character and hero of the movie, Ben (Tye Sheridan), is pulled back and forth the entire movie by his scout buddies. Carter and his other lifetime friend Augie, (Joey Morgan) accompany Carter on a mission to find Miller’s sister at a “super-secret seniors only party.”

Hilarity ensues as soon as the movie opens with a cameo from Workaholics star, Blake Anderson, playing the idiot janitor and reason for the zombie outbreak. The best part about the zombies in this movie is that they still maintained some sort of humanity they had before they were turned. Morgan’s character appeals to one zombie by persuading it to do a zombie voice cover of Britney Spears’ “Hit Me Baby One More Time” when they run into it on a road.

This movie is not for the faint of heart. Expect a lot of gore (it is a zombie movie after all). There is also quite a bit of nudity in the film and being a coming of age story set in the zombie apocalypse, the teenagers in the film spend a good amount of time gawking over the bare skin of their peers.

Zombie strippers, zombie deer and even a house full of zombie cats accompany the normal horde of casual zombies line up and are slain by the scouts. After a quick montage of the scouts running through a hardware store, the characters all leave with some of the best weapons you could think to create, including the popular weed whacker with Rambo knives from the game “Zombies Ate
My Neighbors.”

“Scouts Guide to the Zombie Apocalypse” will bring audiences along on a fast paced night, where all hell breaks loose but all remains well, thanks to the help of three Macgyver’s and a cocktail waitress that will keep you laughing the whole way through. This movie is a hilarious and gory addition to the many interpretations of zombie survival that will help you survive an undead outbreak. I give it 4 dismembered fingers out of 5.