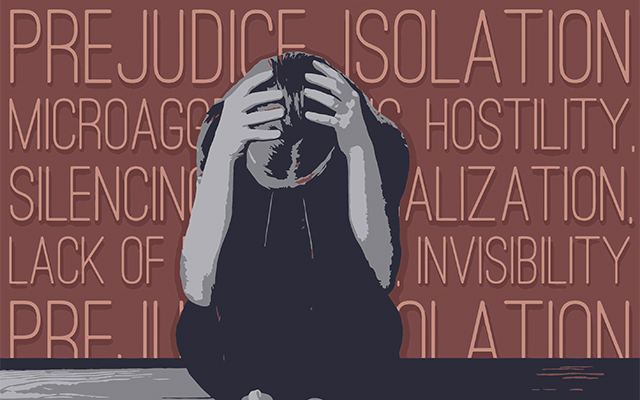 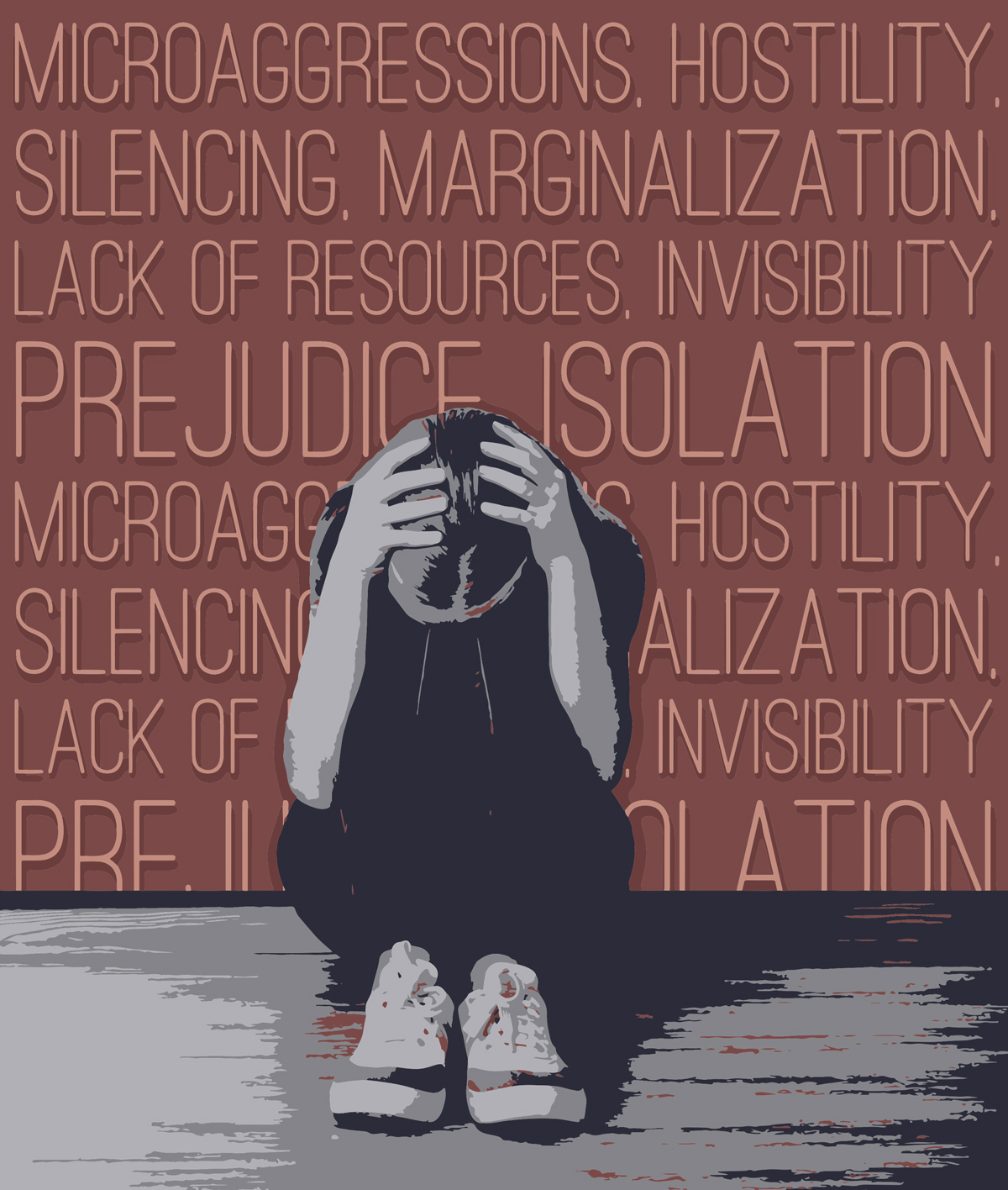 “Seattle University affirms that diversity and inclusion are crucial to the intellectual and psychological vitality of the campus community,” Campus Climate Executive Summary 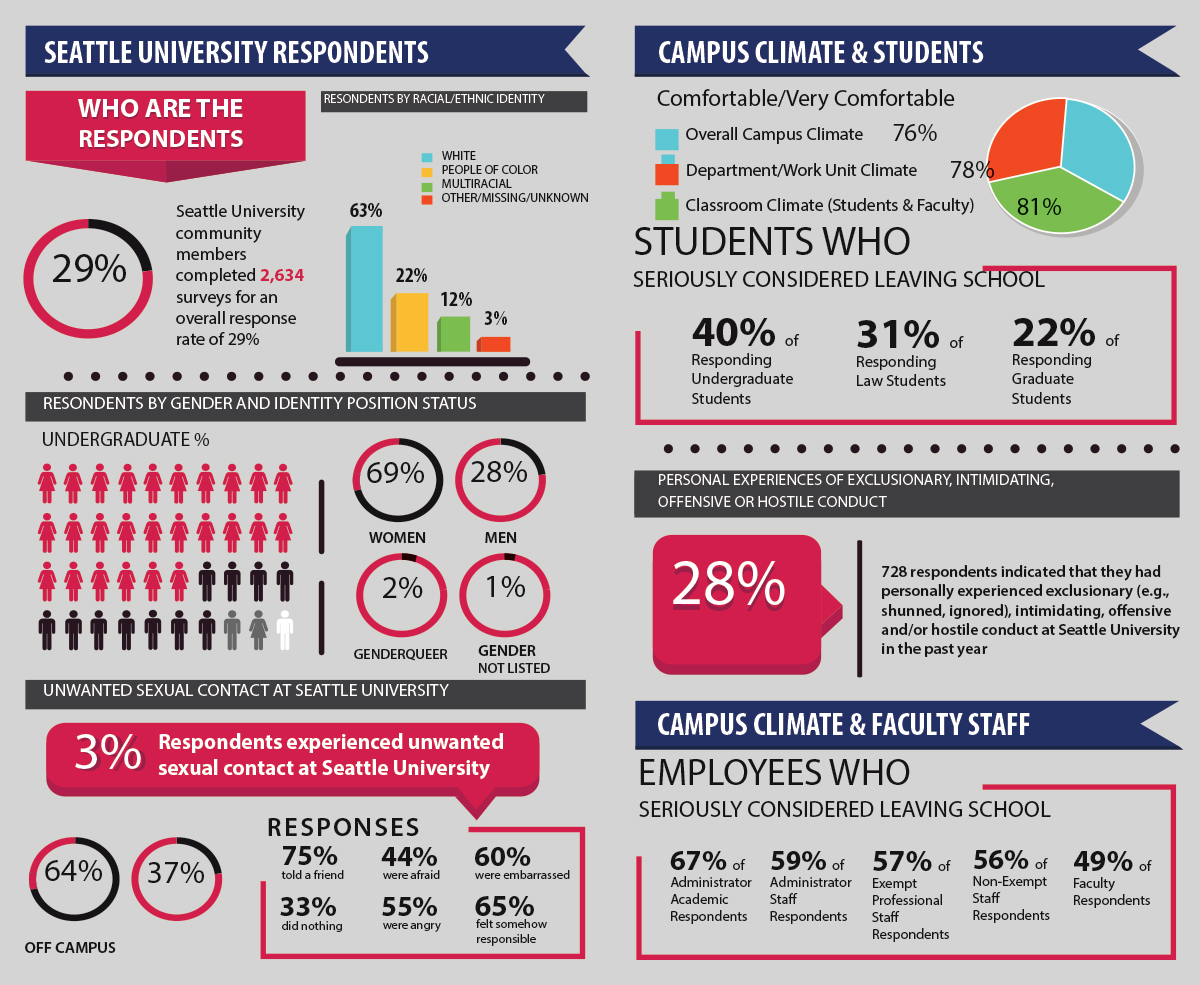 The results of a lengthy campus climate survey conducted earlier this year were made public on Oct. 22, and revealed alarming statistics about sexual assault, discrimination and prejudices present within Seattle University. But the results made clear that there is no single source of these issues—everyone is at fault.

Throughout January and February, the 102 question survey was made available to all faculty, staff and students at Seattle U. Extensive data was collected from the wide variety of questions to analyze and assess how different factors affect the campus climate.

“The work of campus climate, inclusion and equity needs to be everyone’s work,” said Monica Nixon, Assistant Vice President for Student Development and member of the Task Force for Diversity and Inclusive Excellence. “I don’t think that we need to wait to create change.”

In order for the survey to have generated statistically significant results, a 30 percent response rate was required. Seattle U’s community members completed 2,634 surveys, resulting in an overall response rate of 29.4 percent.

The executive summary of the results was released on Oct. 14, providing the quantitative outlook of the key findings in the survey. The full 300 page report was released the morning of Oct. 23, following the presentations on campus given by Sue Rankin of Rankin & Associates Consulting.

Defined as the current attitudes, behaviors, standards and practices of employees and students of an institution, the campus climate is measured through personal experiences, perceptions and institutional efforts. 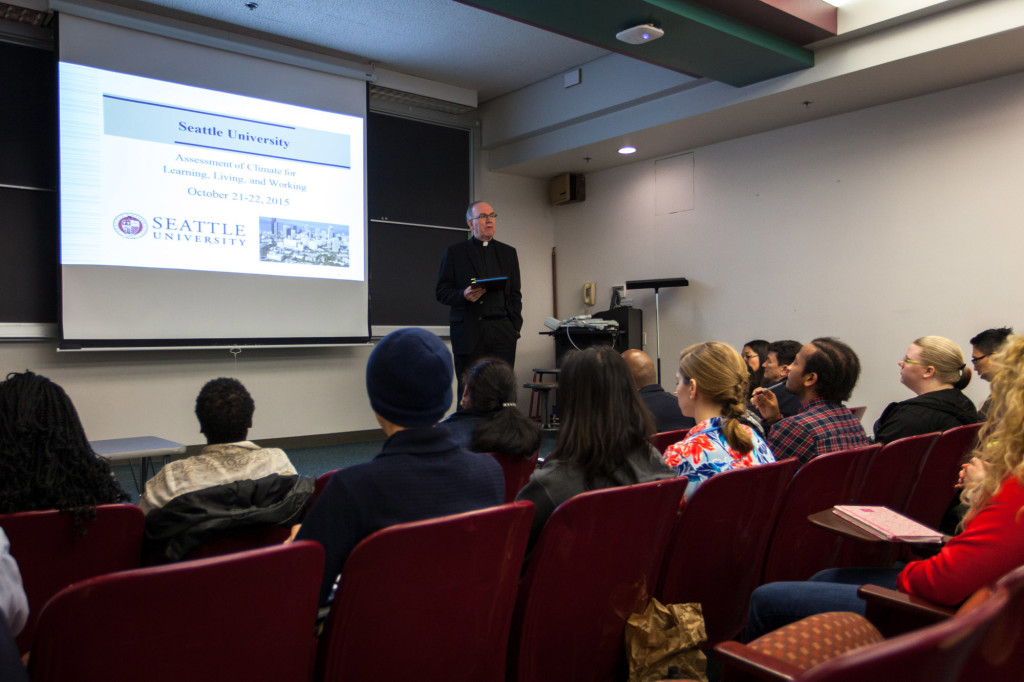 Areas of strength for the university were found in the positive attitudes toward the workplace climate, faculty work and academic experiences. Almost 80 percent of the survey’s respondents felt comfortable with the overall climate at Seattle U, one of the highest percentages Rankin has ever seen.

“Coming out of the climate survey, we still need to be in continued discussion with the university community,” said Natasha Martin, professor at the School of Law and co-chair for the Task Force on Diversity and Inclusive Excellence. “Statistics are helpful to give us a benchmark as to how we are doing, but we need more to make those numbers come to life.”

This level of comfort enabled Rankin to analyze another subcategory specifically for transgender and queer communities as well as the category of undocumented students. Enough respondents felt they were in an environment that was safe to come forward with this identification, a feat she rarely sees.

“I believe that we should be serving underrepresented groups much more,” Junior Class Representative Carlos Rodriguez said.

Contrary to these crucial points, opportunities for improvement lie with members of several constituent groups that are adversely affected by exclusionary conduct in the aforementioned areas of strength.

Those with gender, racial, and sexual identities that were more likely to be accepted responded more positively toward the overall climate at Seattle U, while those with identities less widely accepted were significantly less comfortable.

“I don’t want to invalidate the problem, but it’s hard to imagine some of the things that were listed in the report at such a socially aware school like SU,” junior Rukhsar Palla said. “I think ignorance is a very huge problem.”

28 percent of respondents indicated having personal experience with hostile conduct, the greatest majority of which being ignored or excluded. Furthermore, this conduct among students, faculty and staff were perpetuated within cohort.

In addition, a small percentage of respondents reported experiences of unwanted sexual contact. The full report goes into further statistics regarding sexual assault in colleges and universities, as well as the effects of these experiences on the physical and mental health of students and their academic success. 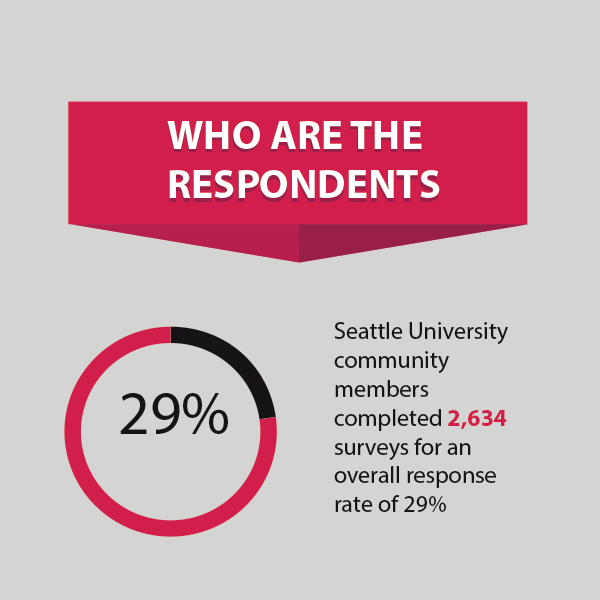 “I think what the climate study and what the work of the subcommittees does adds a bit more evidence to the things we’ve already heard,” said Alvin Sturdivant, Associate Vice President for Student Development and co-chair for the Task Force on Diversity and Inclusive Excellence. “Hearing about some of the class-based, race-based, and sexual orientation-based realities that people on our campus face are not much of a shock.”

The task force will develop recommendations that address topics within the survey, as well as what has newly emerged. Nixon stressed that they are not an implementation group, but focused solely on recommendation.

According to Sturdivant, the rest of the subcommittees within the Task Force will be charged with taking the data gathered from the last two years and from the climate study report to create actionable items that they believe connect with the findings.

As for Student Government at Seattle University, plans to address the survey’s findings and incorporate the anticipated changes are already underway.

The committee will be installing comment boxes around the university in the next couple of weeks. Several focus groups will also be held about the results, in hopes to deepen the campus’s understanding of data that only represents one perspective.

“Overall, the numbers are really going to help us in terms of where there is need for improvement,” said Student Body President Mallory Barnes. “We’re really excited to dig into the data and see what it has to say about the student experience so we can generate effective projects.”

Moving forward, progress can be re-assessed following this fall quarter to see how this data is put to use.

“I think what’s been really rewarding about all of this is feeling as though we were taking some tangible steps to move the university in terms of how we live into our mission to be inclusive and build a more just and sustainable world,” Nixon said. 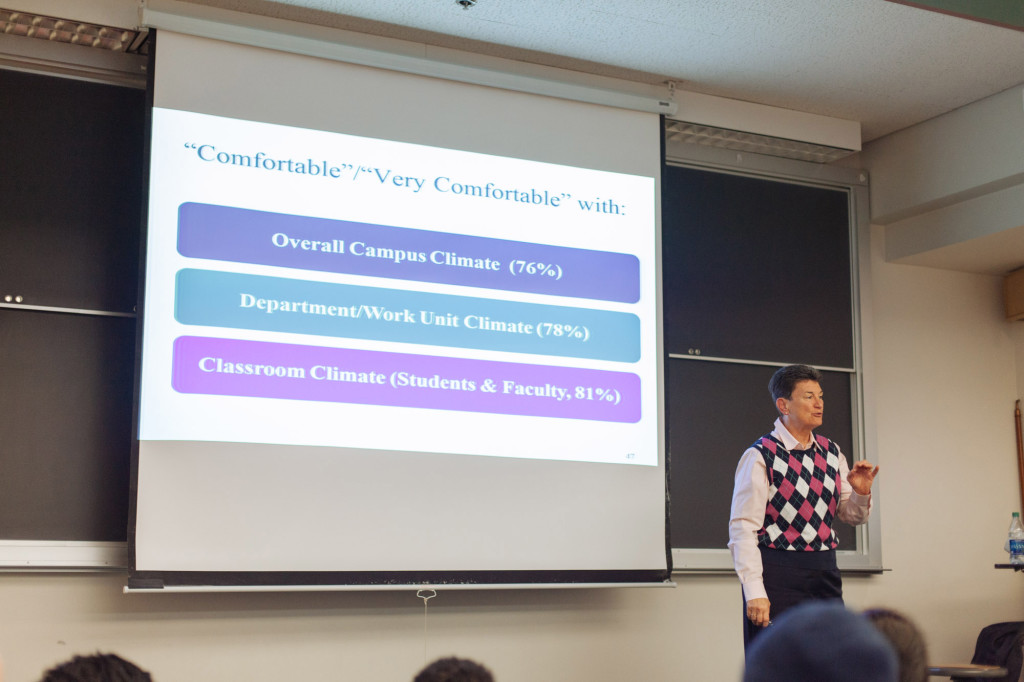 Sue Rankin discusses the overall results of the campus climate.

Following the full release of the survey’s results, the administration, task force, SGSU and various other entities will be meeting continuously to decide official next steps and tentative initiatives.

“I think the main goal for us is becoming action-oriented,” DeWater said. “It’s one thing to talk about and hear presentations on the data, but it’s another thing to use that for change here at SU.”

If anyone has interest in areas the survey did not include, such as intersections of different groups, like being a person with disabilities and a person of color and so forth, there will be an opportunity to use data and dig into those deeper questions.

Several concerns were raised during the campus climate forums, including the strain put on the marginalized groups in the survey to educate the uninformed and ignorant. Rankin implored her audience that the ripple effect would make a difference, and no matter how small, was still a step in a better direction.

As our identities intersect, at the forefront of having difficult converstions and pursuing an inclusive and welcoming campus will be an emotional unlearning of microaggressions
and ignorance.

“What kind of respect do we show each other in our human dignity?” President Fr. Stephen Sundborg S.J. asked. “That very climate impacts the kind of learning that goes on [here]. It’s really up to all of us to find our way forward.”