Bengals Snatch Their Prey, Down Seahawks in Overtime

Within 127 seconds, the Seahawks took a tightly contested game and blew it wide open.

On the first play of the Seahawks’ second drive in the third quarter, rookie running back Thomas Rawls rumbled down the left sideline for a 69-yard score. Four plays later, Michael Bennett forced a fumble, and linebacker Bobby Wagner picked it up for a 23-yard scoop and score.

And just like that, the rout was on. The Seahawks had stretched their lead from 10-7 to 24-7 in a matter of minutes, and seemingly had all of the momentum. 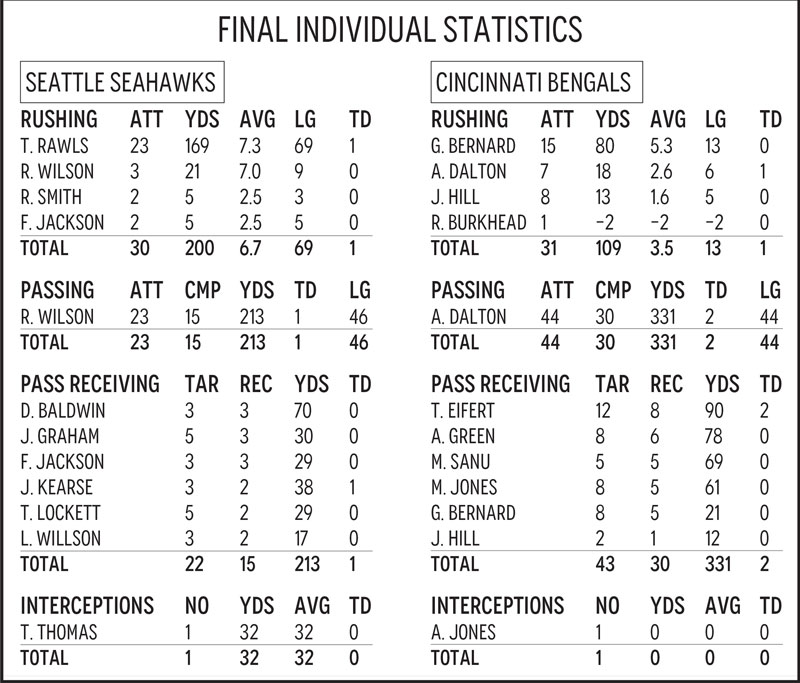 Unfortunately for Seattle, things began to unravel quickly in the fourth quarter. After a quick three-and-out, Cincinatti return man Adam Jones rattled off a 35-yard punt return to the Seattle 33 yard line. Four plays later, the Bengals found the end zone when quarterback Andy Dalton linked up with tight end Tyler Eifert for a 10-yard score.

With the lead suddenly cut to 10, the Seahawks needed a sustained drive from the offense. Instead, Seattle ran five plays before being forced to punt. The struggles continued on defense, as Cincinnati proceeded to put together a 12 play drive that took almost six minutes off the clock.

What seemed like a sure Seattle victory was now very much in doubt.

“It’s difficult to come out of this game like this—after playing so well and doing probably the best job we’ve done this year for three quarters,” Seattle Coach Pete Carroll said after the game. “To let them get back in the game—and they did a fantastic job down the stretch to get this win… it’s really difficult to leave here not winning.”

Another three-and-out gave the Bengals the ball back with just over two minutes to play. Dalton played like an elite quarterback and led Cincinnati down the field with relative ease.

A crucial penalty by Seahawks defensive back Cary Williams aided Dalton’s come back drive. Williams, acquired in the offseason via free agency, was flagged for pass interference, moving the Bengals into Seattle territory. With 24 seconds to go, Dalton scrambled up the middle on third down for a gain of one.

With no timeouts and facing fourth down, the Bengals had to rush their field goal unit onto the field, get set, snap the ball and sink the kick to force overtime. They executed the play without a hitch, snapping the ball with just three seconds remaining. Mike Nugent drove the kick right through the middle of the uprights, and Cincinnati had new life.

“We need to find our way to execute the way we need too to get off the field…to make those first downs, run the clock and win this [game],” Carroll said.

Seattle had their chances in overtime, but penalties and a failure to convert a third and short ended both Seattle drives.

The Dalton-led Bengals were stopped once in overtime, however they would not be denied on their second possession. It took just five plays to move into field goal position, setting up the potential game winner. Cincinnati kicker Mike Nugent hooked the kick, sending it into the left upright, however it was inside just enough to bounce through and give the Bengals the win.

Despite the loss, there were plenty of bright spots for Seattle in Sunday’s game. Rawls, starting in place of the injured Marshawn Lynch, rushed for 169 yards on 23 carries, and Seattle’s defense stymied one of the league’s top offenses for much of the game.

Post game, the message from the team was clear.

“The key is [to] watch the film, make the corrections and move on to the following week,” Avril said.

This game marks the third time this season the Seahawks have blown a lead heading into the fourth quarter.

“We have to play a great four quarters,” Seahawks quarterback Russell Wilson said. “We played a great three quarters, but not four.”