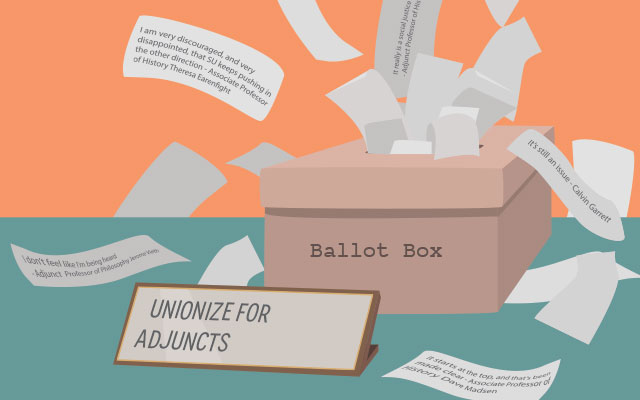 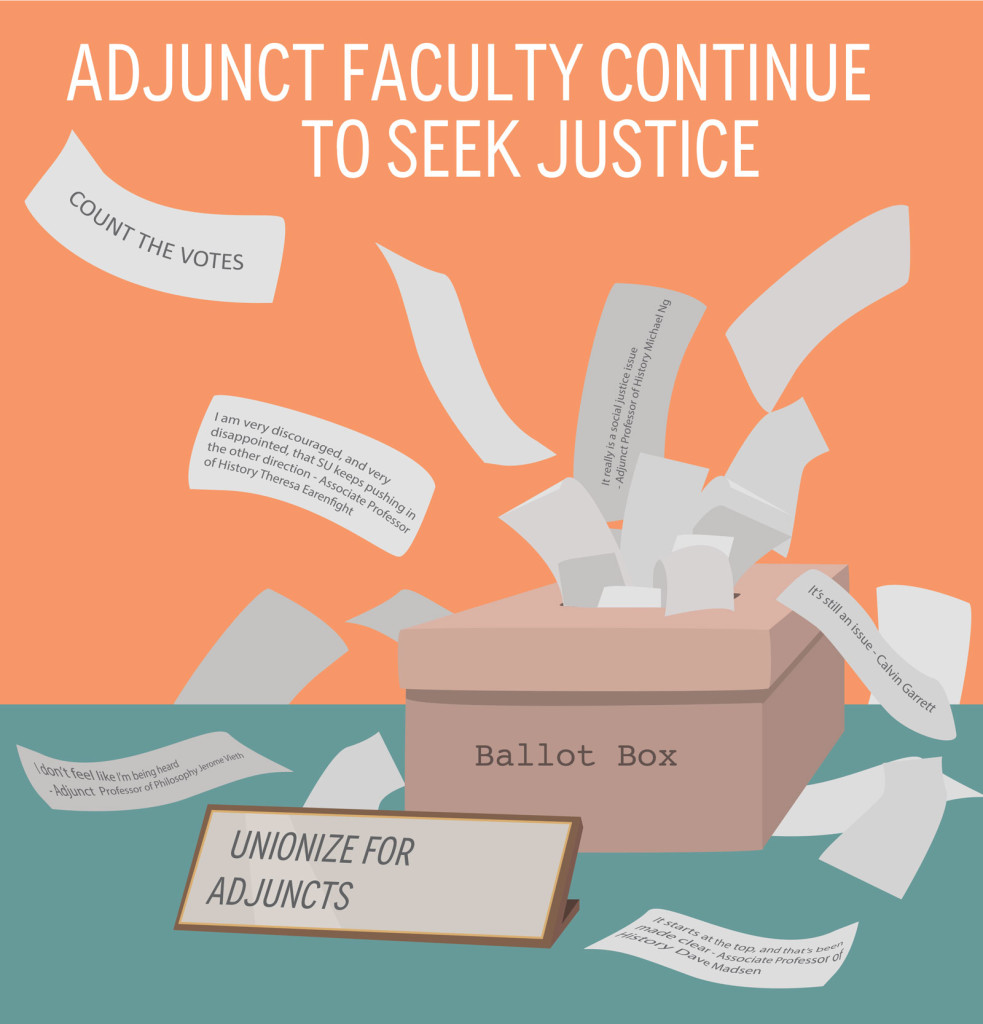 “If through necessity or fear of a worse evil the workman accept harder conditions because an employer or contractor will afford him no better, he is made the victim of force and injustice.” Pope Leo XIII wrote these words more than a century ago, in 1891, in an open letter that was passed to all Catholic bishops. It addressed the condition of the working class and discussed the relationships and mutual duties between labor and capital, as well as between the government and its citizens. Most importantly, it supported the rights of laborers to form unions.

At Seattle University, non-tenure track adjunct professors make up more than 50 percent of the entire faculty. Their concerns over wages and conditions manifested into a vote taken last year to form a union. Those involved believe that this union would enable non-tenure faculty to collectively bargain with the administration for their needs. Seattle U blocked the release of the results of that vote from being released by filing an appeal in June 2014. 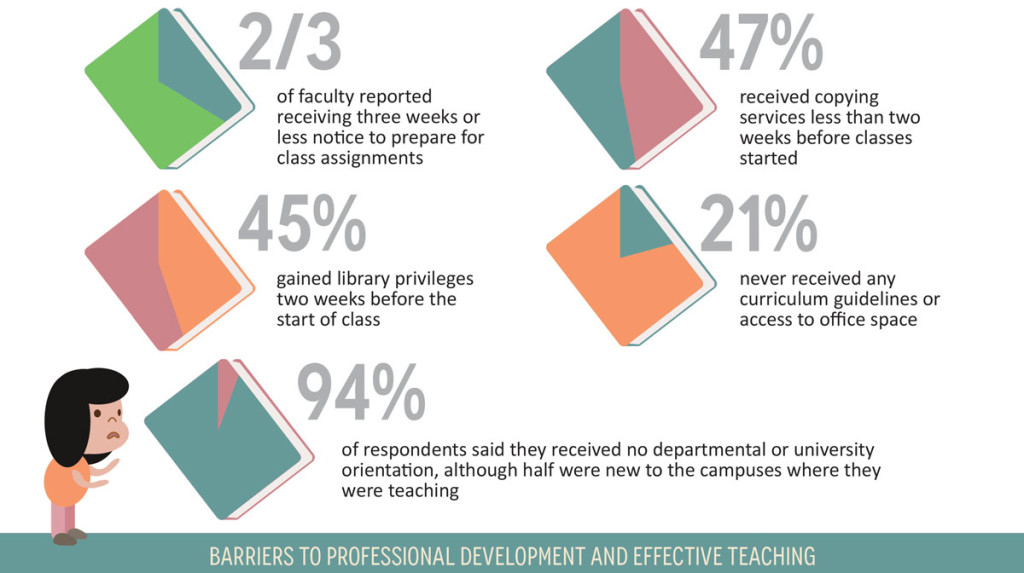 “The issue is not whether faculty may organize,” lawyers representing Seattle U wrote in an appeal released earlier this year. “Rather, the issue is whether the government can and should exercise control or influence over how a religiously-affiliated university carries out its religious mission.”

Provost and Chief Academic Officer Isiaah Crawford explained that the University is dedicated to supporting all faculty.

“We certainly feel that we have been able to make significant strides as it relates to rights and responsibilities and compensation for all our faculty,” Crawford said.

Unlike most institutions in this country, Crawford said, the structure of the faculty governance body at the university gives voice and vote to those who work here on part-time contracts. Starting last year, two part-time faculty members held a seat on the academic assembly. Two separate matters are being confused as one, Crawford said. On one hand, faculty members are pushing for a union. On the other hand, Seattle U is trying to defend itself in court.

“The courts have repeatedly recognized that the NLRB, a government entity, does not have jurisdiction over religious institutions,” Crawford said.

Since the vote was taken, President Fr. Stephen Sundborg, S.J., along with members of the upper administration and the Board of Trustees, have filed additional appeals in both regional and state court.

“The birth of the problem,” said associate professor of history, David Madsen, “was when the university began to rely increasingly on those adjuncts.”

Madsen, a tenured professor, is a strong supporter of the good work that he believes unions can achieve. He explained that most of the faculty that taught at this university used to be tenured or tenure-track, and the occasional adjunct was brought in based on unique expertise. In time, the process began to reverse itself. Gradually, a significant difference between the salaries and benefits of tenured or tenure-track faculty and faculty with contingent contracts became evident. Over the years, this inequality grew until adjunct faculty were teaching a majority of the courses—yet were being paid less.

“It was simply a way of cost containment,” Madsen said. “It’s cheaper to hire adjuncts than it is to hire tenured track faculty.”

The next step for adjunct faculty members, according to Madsen, is to count the vote, taken in Jun. 2014. He expressed concern over the duration of this process, and what that may mean for the validity of the vote itself, seeing as some participants that voted no longer work at the university. 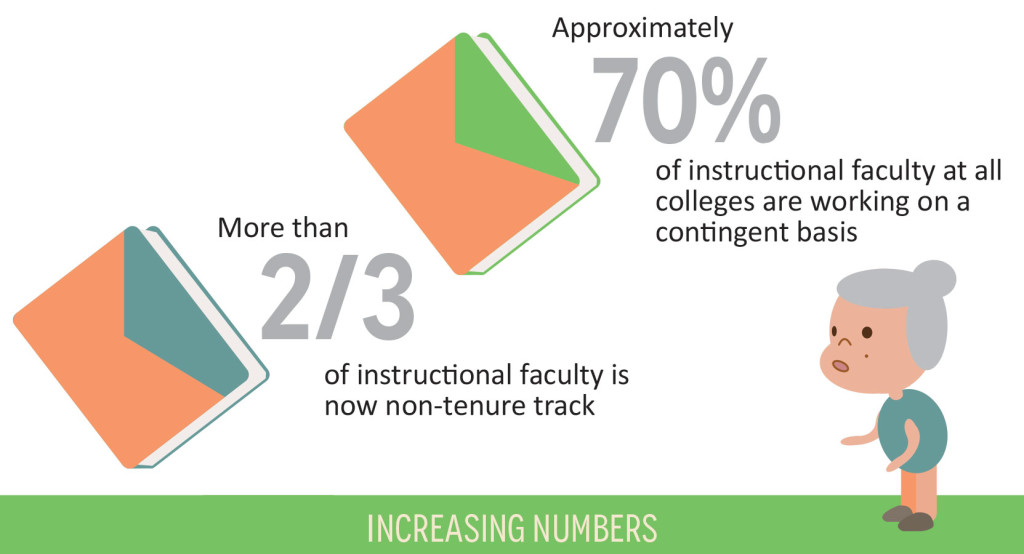 Beyond difficulties with counting the vote, Madsen spoke of a hostile environment that could form due to a lack of communication. With adjunct faculty on one side and upper administration—the President, Provost and Executive Vice President—on the other, he fears that waiting longer will only make things worse.

“It starts at the top, and that’s been made clear,” Madsen said. “I think the longer the delay, the greater the rift between the administration and the non-tenured track adjunct faculty.”

After over two years of organization and conversation at Seattle U, the adjunct community was struck by the loss of one of their own, former adjunct professor of philosophy David Heller. Known by his friends as an itinerant philosopher who was constantly surrounded by his books and work. Heller died of an untreated thyroid condition on Jan. 2. Many attribute his near-poverty line salary with his death.

“He had a beautiful life in that he lived exactly what he wanted, which was the life of the mind,” friend of Heller and professor of English at Everett Community College, Charlie Fischer stated in an interview with the Seattle Times. “But it had a cost. It was sad to see how little value society places on what he did.”

Adjunct professor of philosophy Jerome Veith currently has a non-tenure track contract. He has worked at Seattle U both as faculty and as a graduate student. Since his contract is renewed every quarter, he believes that soon he will be priced out of the local housing market and won’t be able to live near campus.

According to Veith, the administration is making a mistake by arguing that the unionization of faculty represents the interference of the federal government in a religious institution.

“If that’s the issue,” Veith said. “We shouldn’t be allowed to have a sports team or a military presence on campus. Those are also federal interventions into our practices.”

Earlier this year, the Connolly Center went through major renovations. According to Veith, the NCAA told the university that it needed to abide by certain codes and standards, such as equal gym sizes for mens’ and womens’ teams.

“We’re spending millions of dollars to renovate this complex,” Veith said. “Not because we wanted to by our own will, but because the Title IX codes for sports say you must do this.” Title IX is a federal law that prohibits discrimination on the basis of sex in any federally funded education program or activity. Veith continued, “if we can afford millions of dollars to renovate a sports complex, why can’t we afford to pay our non-tenure track workers what they deserve?”

Adjunct professor of history Michael Ng also has a non-tenure track contract with the university. He sees the refusal to change working conditions at Seattle U as fundamentally against the school’s mission.

“It really is a social justice issue,” Ng said. “I find it very problematic that we have Pope Francis coming to the states to talk about economic justice, and here we are, as a Jesuit institution, quietly fighting economic justice.”

Seattle U hired Ng about six years ago. Since then he has always worried that the university won’t renew his contract and that he’ll have to find a new job. Many adjunct faculty members, he said, feel the same way.

Most of these professors, Ng added, aren’t asking for higher wages. Many of them simply want to be included in the conversation. In 2014, a group of students, alumni and professors—tenured and non-tenured—delivered a letter to Sundborg’s office saying that they would like to negotiate the formation of a union, making it clear that they would prefer to avoid the interference of the federal government, and use a third party organization. Sundborg gave no official response to the letter.

Last April, history professor Theresa Earenfight and eleven others—students, faculty, and a few community members—were arrested while they sat in the intersection at 12th and Madison and disrupted traffic to protest the fact that the university was refusing to accept the NLRB findings.

“I am very discouraged, and very disappointed, that SU keeps pushing in the other direction,” Earenfight said. “I think they will find themselves on the wrong side of the law.”

Even though she received tenure more than a decade ago, Earenfight is an outspoken advocate for the members of the adjunct faculty at Seattle U. According to her, people can keep this issue alive by “banding together and staying public and vocal.” She recently heard an associate who is a lawyer say that, considering the duration of the court proceedings and the hourly wages of the prosecutors that the university is working with, the legal fees must be well over a million dollars.

“That’s a lot of money for a losing cause,” Earenfight said. “They should be focusing more on teaching, and supporting teachers, then paying very expensive law firms to fight a fight that doesn’t have justice.”

Students have had a long history of involvement in this issue. The Student Government of Seattle University released resolutions in support of adjunct and contingent faculty unionization in both 2013 and 2014. Among concerns that the adjunct model is being misused—statistics showed that last school year 74 percent of the student body was in full support of faculty unionization.

One of the founding members of Reignite the Mission, senior Calvin Garrett, believes that the lack of conversation and change regarding adjunct faculty rights impacts student experience. RTM is a club that, “exists to catalyze radical transformation at Seattle U in order to end racism, sexism, homo/transphobia, classism and disaster capitalist practices on campus.”

“It certainly does have a negative impact on student experience of their academic programs, because faculty may not even be there next year or have an office,” Garrett said.

While the efforts of RTM are ongoing, Garrett explains how difficult it is to continue the conversation with new students arriving every fall. However, as of Oct. 7, the elected student government has no official stance on adjunct faculty unionization.

“It’s still an issue that every year we have a whole new group of students come in not knowing what is going on,” said Garrett.
The votes still haven’t been counted, and the situation of adjunct faculty remains unresolved at Seattle University.