Life After Graduation: Where do the Redhawks Migrate? 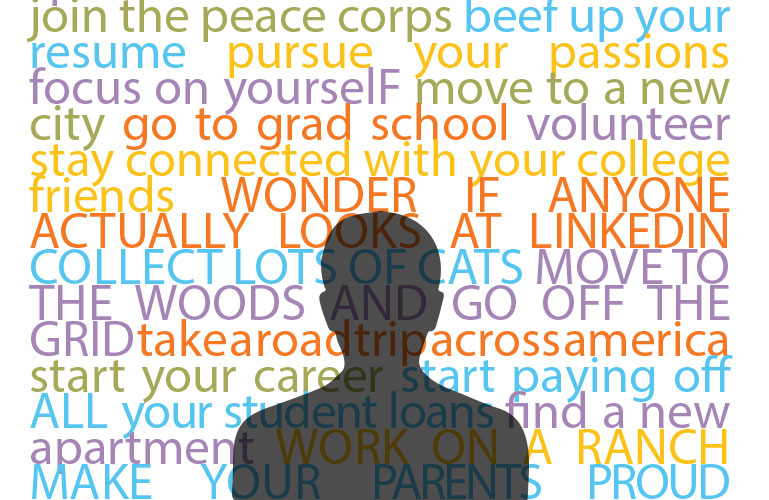 Senior Redhawks are preparing to spread their wings and fly.

In two short months, this year’s seniors will be walking across the stage at their graduation ceremony, and stepping off into the professional world. (Paychecks, insurance, bills, oh my!)

Seattle U has a number of rankings and accreditations. Seattle U graduates have an average entry-level salary of $46,000–which puts them in the top ten highest-paid liberal arts graduates in the nation, according to College Factual.

Seattle U was also put in the #7 slot of best value colleges in the West by U.S. News.

As many recognitions as our school has, it is much easier to see the quality of our education when we take a look at the students and young professionals that it has produced.

In 2009, the Office of Institutional Research at Seattle U conducted a survey for alumni of the previous ten years to complete. The focus of this survey was to figure out if Seattle U was successful in its mission and where the alumni were taking their career.

This graduating year, Mason Kassis, a humanities for teaching student, is continuing his graduate school right after he receives his bachelor’s degree.

Wishing to teach at the fourth grade level, Kassis was recently accepted into the University of Washington’s masters in teaching program, which he will begin this summer.

Benjamin Gulmon, a biology major, is thinking about beginning to apply for graduate schools after he graduates.

However, for other seniors, graduate school is still in the distant future. Nina Cataldo, a strategic communications major and creative writing minor, is thinking about possibly attending graduate school, but, she wants to focus on her post-graduation job first.

Katie McCue, a finance and accounting double major, only plans on receiving further certification after graduation, a requirement for the job she has lined up at an accounting firm in Bellevue.

McCue will be studying to take tests required to become a Certified Public Accountant, so that her job at the accounting firm can become full-time by the end of summer.

AnneMarie Ladlad is not thinking of going to graduate school to advance her career. Her dream is to someday operate her own PR company.

Kate Santos, a nursing student, does not plan to immediately jump into her career.

“My plans are to take my family around Seattle for the first time and have a blast in Europe and California,” Santos said.

When she finishes traveling, Santos will then study for and take the exam for a nursing license, and then continue looking for a job at a hospital.

The same survey also reported that the majority of undergraduate alumni were only slightly or moderately involved with clubs and activities on campus. Of those who were “very much” involved, the majority of them held on-campus jobs and/or internships.

Students like Ladlad would fall into the latter category.

Ladlad, who began attending Seattle U through Seattle Preparatory Academy during her senior year, held an officer position for the United Filipino Club her first three years at Seattle U.

She is now an officer and the main student contact for the Public Relations Society of America, along with holding an internship at Visit Seattle and working in PR at the campus ministry office.

While not all students may be as busy as Ladlad, they can still network the same way that she did.

Ladlad found her current internship through the Public Relations Society of America, and she also found her post-graduate position at Jesuit Volunteer Corps through networking.

“I wouldn’t have heard of JVC if it wasn’t for [Campus Ministry, which] had a recruiter come into the office,” Ladlad said.

Like Ladlad, McCue has also held jobs and internships that have given her skills and connections for her post-graduation career.

As an early undergraduate, McCue worked as a teller at a bank in Seattle, which morphed into an internship she now holds at Russell Investments.

“Getting one job [even] slightly pertaining to your field really helps when you are in line for other things,” McCue said.

Santos also held a few positions on campus, like being a TA for an Anatomy and Physiology class and working at the campus store.

She has also been an active member of the United Filipino Club, like Ladlad, and Marianas TaoTao Tano Club.

“The people [in this club] give me a comfortable sense of home, despite being miles away,” said Santos, who is originally from Guam.

She also volunteered as a student nurse off-campus for Camp Casey, taking care of children with disabilities.

Kassis has also held a number of jobs while at Seattle U.

He worked as a tutor at Seattle Girls’ School his freshman year through the humanities for teaching program, and for his winter quarter during his sophomore year, he was placed in a fourth grade classroom in Stevens Elementary School.

Kassis has been working as a second, third, and fourth grade tutor at Bailey Gatzert School. This quarter, he will be in charge of the second grade math program there.

Additionally, he has also worked as an intern at The Chill Foundation, a position that combines his love for snowboarding and his future career as a teacher.

From other feedback on the survey, it was also revealed that over 35 percent of undergraduates “very much” believed that Seattle U gave them “an ability to reengage with those who are different.”

Cataldo was lucky enough to have the opportunity to study abroad in Tokyo, Japan, where she spent the first eight years of her life.

“Seeing Japan and Tokyo from an adult perspective instead of my childhood perspective [allowed me] to experience a whole new culture of Japan that I didn’t know before,” Cataldo said.

This experience in Japan while help her when she travels overseas to spend four months in Tokyo for her post-graduation job.

After these four months, Cataldo will be able to return to the United States and work remotely, but she will continue to work with the Japanese language and culture.

While she is working remotely at the company in Tokyo, Cataldo will also be writing a book about “this new concept of teaching English that wasn’t introduced in Japan before, where you can increase up to 1,600 different vocabulary in just 500 sentences,” Cataldo said.

Cataldo also agreed with the more than 25 percent of undergraduates who said that Seattle U helped them “more consistently act in accordance with [their] moral conscience.”

“[Seattle U] really helped me strengthen my own values and go into the real world knowing what I stand for and looking for a career path that is for the humane and just world,” she said.

The majority of undergraduates–over 50 percent—reported that they “very much” developed general intellectual skills at Seattle U, which helped them in their career.

As Kassis prepares to step onto a new college campus, he reflected on what skills Seattle U has given him that will help him in his career.

“It gave me good critical thinking skills,” he said.

Originally hoping to attend a university in California, Santos is now glad that she chose to come to Seattle U because she has developed leadership skills, which will help her in her career as a nurse.

“SU has taught me the true definition of leadership: the ability to empower individuals to successfully accomplish goals. It is the power of a trustworthy team that creates a great leader,” Santos said.

Elementary school teacher and financial advisor are both on the U.S. News’ list of best and fastest-growing careers, at numbers 39 and 35, respectively. Meanwhile, software engineers have a 45 percent national growth and “nurse” is the most popular title in the Seattle metropolitan area, according to citytowninfo.com.

But everyone’s story is different and everyone is taking different paths. Not everyone at Seattle U will be getting into the most popular or fastest-growing careers. Cataldo and Ladlad are not.

However, a Seattle U education gives many students skills that make them desirable to future employers—like liberal arts skills, which the U.S. News reported are still valuable to employers earlier this year.

Siri can be reached at [email protected]