We often think of immigration reform as something that only affects states along the southern border. Yet, undocumented immigrants play a role in many communities in Washington State, including Seattle University.

Earlier this year the Justice Department urged a federal appeals court hearing to reverse a hold that a Texas judge placed on President Obama’s executive action on immigration. Obama’s executive action, which intends to give legal reprieve to many undocumented immigrants as well as extend coverage of deportation deferral, restarted talk of immigration reform last year. In the past few months this discussion has caused many Border States to argue against the move, citing its potential illegality in regards to state sovereignty. 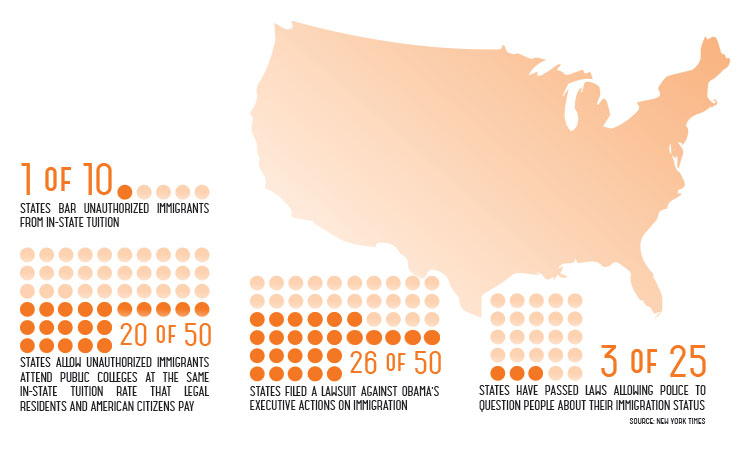 This recent development allows us to look at not only the political side of immigration, but it also opens our eyes to the local undocumented immigrant populations.
Washington allows illegal immigrants to obtain drivers licenses and has looser restrictions on employment than most states. On top of that, undocumented immigrants are also allowed to attend colleges and receive financial aid.

Seattle U has been a prominent voice in how educational institutions can positively influence undocumented students. Not only does the university have a population of undocumented immigrants that is supported financially by the institution and communally through offices like OMA, but many staff and faculty have spoken up about the topic. In 2011 a committee of staff, faculty, alumni and community partners published “Recommendations for Policy Concerning Undocumented Students,” a 15-page document that discusses the university and its potential role.

“The committee strongly believes this document has the potential to offer Seattle University and many of our colleagues at other institutions significant language needed in order to strive to ensure that all of students, including the most marginalized, have access to higher education,” stated Assistant Director of Multicultural Affairs Juanita Jasso.

Our own President Fr. Stephen Sundborg, S.J., has spoken out in support of immigrant rights. Known for working personally with students that are undocumented and speaking up for the role Seattle U should have in their education, he has pushed for further aid and inclusion of these students.

“Without Social Security numbers, they can’t get a job to help pay for college. Yet they are among our hardest-working, most accomplished students and our most popular leaders,” he wrote in an op-ed piece for the LA times in 2010.

However, according to Ray Corona, we still have a lot of work ahead of us. A leading member of the Washington Dream Act Coalition, Corona and his fellow members help to not only foster community with undocumented immigrants, but also organize grassroots mobilization for further reform.

“We need more permanent solutions. This issue calls for a number of different solutions, not just one,” he said in regards to how we ought to go forward with reform.
For him, one of the biggest problems we have is how the rest of America views undocumented immigrants. Either they are completely invisible, or they are stereotyped. However, through the coalition he hopes to show that not only do these people exist, but that they are also now largely active youth that come from numerous backgrounds.

“Whenever I’m putting myself out there, I always say that I’m undocumented, always, and I’m not ashamed of that but there’s a lot of people that think that it’s wrong. And I don’t think that’s the world we should be making… We cannot say be yourself if being undocumented is a part of who you are,” he explained.

Most importantly, Ray elaborated on how much more needs to be done. Although our state has helped undocumented people attain permits and legal reprieve, for him these policies only last for short periods of time and there needs to be more permanent solutions. He also stated we should push for other states to not only accept undocumented students into college but also give them financial support. On top of that, Ray urges all people to keep this undocumented population in mind at whether at the voting booth or in their homes. In looking at these issues he stressed the importance of this for the country as a whole.

“These issues aren’t just immigrant issues, they’re important for all of us.”

The hearing, which will decide whether the four million immigrants are eligible for Obama’s programs, is set for April 17.

The news editor can be reached at [email protected]