President Barack Obama recently released his proposed budget for the year 2016. The $4 trillion budget is projected to reduce the national debt by $1.8 trillion over the next 10 years and one of the major focuses is on improving American education.

One major component of the budget is a $60 billion allotment to be used over ten years to help students in America attend community college for free. Community college is currently the cheapest higher education option but, for many people, the financial responsibility can still be a burden. 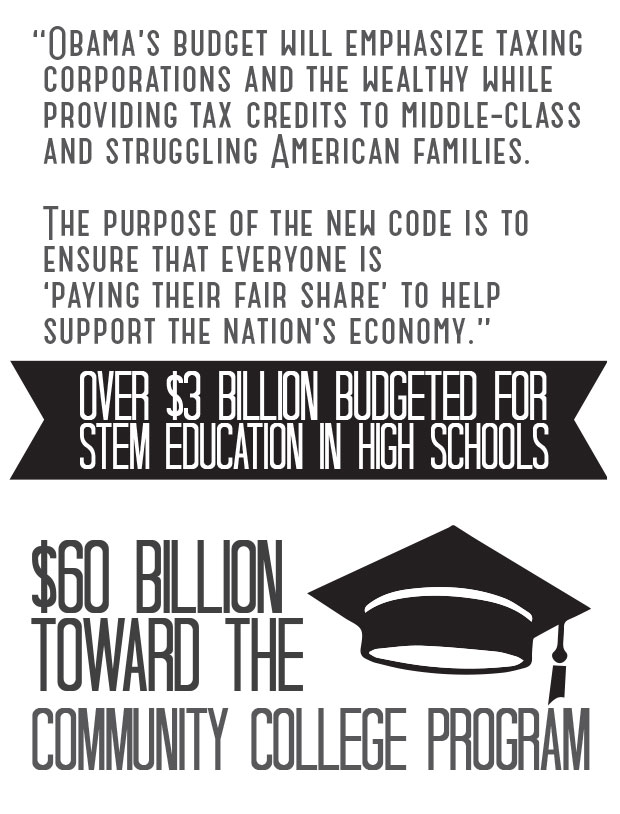 “It is a small effort to redistribute the accessibility of resources and power in our country,” said junior social work major Emily Walter. “I think that is a great thing.”

“When we are talking about free [community] college, we are talking about all of these populations,” said Hughes. “There are actually increasingly more opportunities for tuition to be paid through other sources. When the president says we are making community college free, he is talking about that and the programs already in existence.”

It is likely that this proposal will be on a last-dollar basis, meaning that the government will step in to pay the remainder of a student’s community college tuition after every other available resource has been utilized.

Along with providing this free higher education to students, the new budget also targets high school education, with a focus on science, technology, engineering and math fields.

Over $3 billion will be invested in STEM education in high schools and that will include a new competitive program that will open up more opportunities for women and other underrepresented groups in those fields of study.

“We are currently working on a proposal with the School of Science and Engineering for a grant that will allow us to support undergraduate students of color into STEM fields for teaching,” Hughes said. “A significant number of these initiatives have come up over the last decade. The economy is driven by STEM sectors and the higher education system is not putting out enough people to fulfill [workforce] demand.”

Hughes said that it will be interesting to see how this shift in focus alters universities such as Seattle U.

“Universities can easily chase dollars, and if we do that, we lose something significant in Jesuit education for creating leaders for a just and humane world,” Hughes said. “The good news is I don’t think that will happen; there are enough voices to remind us who we are.”

Another aspect of Obama’s budget is a new tax code that involves higher taxes on corporations and the wealthy while providing tax credits to middle-class and struggling American families. The purpose of the new code is to ensure that everyone is “paying their fair share” to help support the nation’s economy.

“There are some tax breaks that everybody gets, but most of those breaks fall on the wealthy,” said Associate Dean of Albers Susan Weihrich.

In the current tax system, people do not have to pay an income tax on inherited money. Tax rates have also risen over the years for income, but not for capital gains, which includes any monetary gain made from selling an investment.

“[Obama’s plan] will make the tax system more fair in terms of how we perceive fairness as the rate at which income is taxed,” Weihrich said. “It will be more fair in that all income will be taxed at the same rate rather than different rates depending on the types of income you have.”

Middle-class and struggling families will be assisted by having the tax credits for childcare tripled along with the expansion of childcare assistance and access to high-quality, affordable healthcare.

In the budget, there will also be $7.4 billion set aside to invest in clean energy technologies along with $1.29 billion going toward the Global Climate Change initiative.

“I think it is really important for our nation to be focusing on that right now,” Walter said. “I think [President Obama] did a really good job of finding ways to reappropriate the money.”

Now that the budget has been proposed, we will have to wait and see if Congress decides to pass the proposed plan.

“Sadly both [chambers] in Congress right now are Republican, so I don’t think things look good for this proposal actually getting passed,” Walter said. “But the proposal looks good.”