“I remember getting totally pissed off the first time I got a letter that started off with ‘Dear Ms. Smith,'” Patti Smith recalled during a 1976 interview with Penthouse Magazine. “A word like ‘Ms.’ is really bullshit. Vowels are the colors and souls of poetry and speech. And these assholes take the only fuckin’ vowel out of the word ‘Miss.'”

And with that snarky comment, she all but summed up her unique views on feminism. 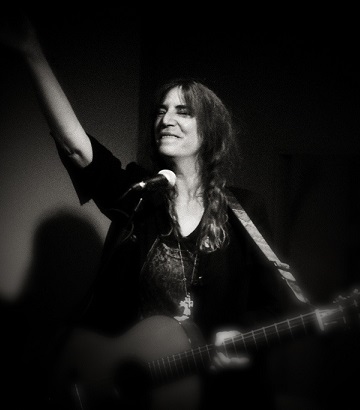 Patti Smith is a poet and singer-songwriter who played a central role in the creation of the 1970s New York City punk scene. Her melodramatic music, iconoclastic attitude, sartorial style, and bold and beautiful poetry secured her a place in history as one of the first women in punk—the “punk poet laureate,” as she’s been so aptly nicknamed.

I first discovered her music during my freshman year of college, and was immediately captivated by her dramatic lyricism and her wild, anarchic voice. As an aspiring musician myself, I was deeply inspired by her free-spirited attitude and her poetic approach to music. Her music quickly found its way into the regular rotation on my iPod, and I have since spent countless hours exploring all 11 of her albums.

Then last week, the most beautiful thing happened: I was finally able to experience the music of this living legend performed live in person at the Moore Theatre in Seattle.

It was everything I hoped it would be. I was thrilled to see that, even at age 68, Patti Smith has not lost a single bit of her trademark snarl. She growled and howled through each of her most dynamic songs, and her dance moves weren’t half bad, either.

Naturally, she was dressed in her trademark androgynous getup: jeans, t-shirt, black blazer, and a black bowler hat balanced atop her long, tangled hair. Her striking confidence and her strong sense of self radiated from the stage. She looked like a rock star. She is a rock star.

But despite her status as a daring and historically influential female artist, Smith’s ideas about feminism are not quite what you might expect. For Smith, her art and her music transcend her politics and her gender.

This tendency to “spiral out” is precisely the beauty of Smith’s music. Her lyrics follow her stream of consciousness, and her songs often toe the line between spoken word and music. She grunts, yells, moans, groans, and uses any other number of cries to express herself freely and fully without regards to the constraints of politics.

In no song is this more apparent than in “Gloria.” Smith’s nonchalant attitude shines through as she sings from a man’s perspective, bragging about sleeping with a pretty girl he meets at a party. The song is emblematic of the Patti Smith aesthetic: cool, confident, and self-assured.

The lyrics express ownership of her desires, and she refuses to apologize for them. Within the first few lines she declares her independence, singing, “My sins, my own, they belong to me.” She reclaims what others might shame, and in doing so she liberates herself from the societal pressures of what women “should” and “should not” do.

She grooves and groans, building in excitement and intensity as the tune progresses and she lets loose, singing “I gotta tell the world that I made her mine!” (Complemented by a chorus singing “GLORIA” in the background, naturally.)

Utlimately, “Gloria” is not a feminist anthem, nor is the rest of Smith’s music; it is a call to let loose, to stop thinking about society and politics and gender and to just create.

“The French poet, Rimbaud, predicted that the next great crop of writers would be women,” Smith said. “And I believe in that completely. But hung-up women can’t produce anything but mediocre art, and there ain’t no room for mediocre art.”