English Professor on Her First Novel , The Writing Life 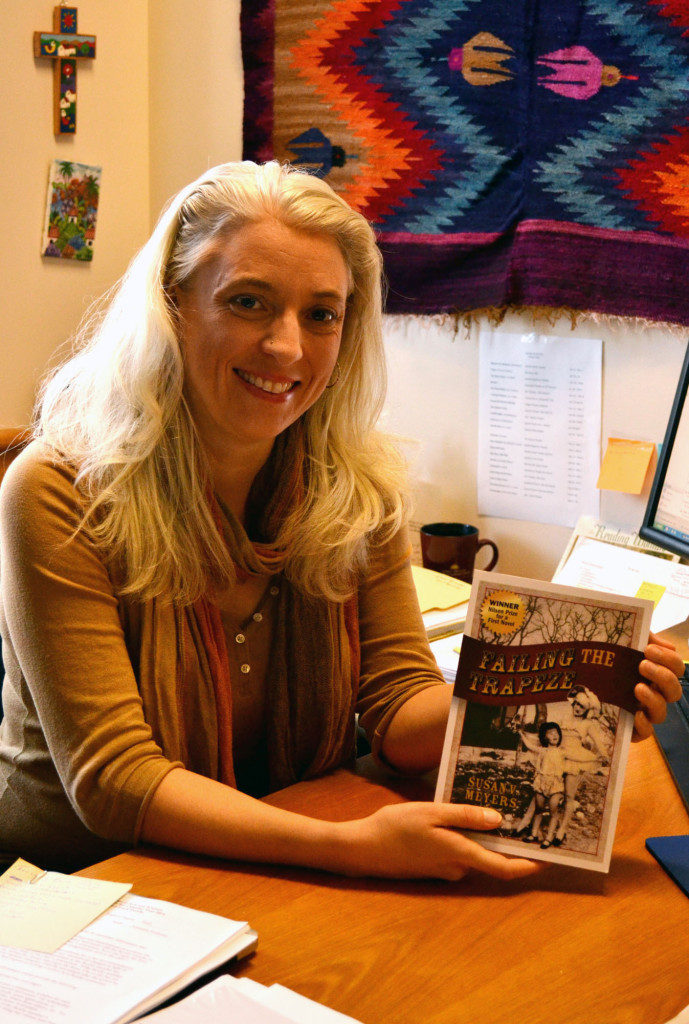 English professor Dr. Susan Meyers’ family history is not lacking in exciting stories. Her grandmother, orphaned at 15 with her three younger siblings, opened a honky-tonk dance hall and bar in Texas to pay the bills. Later, that same grandmother began taking her own children onto carnival circuits. This practice would rub off on Meyers’ father, who started his own concessions business, working events up and down the West Coast. Young Susan and her siblings traveled with him, selling food and beverages and acquiring a valuable set of memories that would influence her writing career years later.

In her debut novel, “Failing the Trapeze,” Meyers tells the story of 15-year-old Theresa Williams, who discovers the suicide of her family’s houseguest. Theresa’s combined sense of fear and fascination send her down a path of inquiry into her family’s history, which is, well, a bit of a circus. This Thursday, Jan. 22, Meyers will read from her novel at Elliott Bay Book Company at 5 p.m.
Interview responses have been edited for length.

WM: Could you speak to the way(s) that your family history influenced the book?
SM: My family did have a circus during the early part of the 20th century, and that family business cycled through iterations of circus culture and some other manifestations related to carnival life, and I grew up with a portion of that. Not with the circus itself, because most circuses died out in the Great Depression in this country…

Whatever your childhood is like…you don’t know whether to think any quotient of it is “normal” or not, until you get a little bit older and you have perspective. I do remember getting to my teenage years and telling people that I liked writing, and then telling them about my family history, and they’d say, “You have got to write this down!” But it honestly took a lot of time to figure out how to shape it. Because it’s one thing to sort of be in the culture and another thing to figure out how you can create a narrative arc that has, obviously, a successful shape as a narrative, but also some substance to it as a story that’s got a message.

WM: Is there any message you want readers to take away from your first novel?

SM: I think it’s about the hopefulness of connections between people, no matter how difficult and tenuous those connections may be at certain moments. It is a book that has a lot to do with family secrets and deception and other reasons why people keep information from each other at different points, when they may have no other choice but to do so, and the way that can feel like betrayal, or someone letting you down. But, ultimately, there can be so much in the material conditions of our lives that can make choices for us, and we’re not always necessarily meaning harm to others, and I think there are ways that we can refocus on connection amongst us as this, essentially, this kind of saving grace.

WM: Could you speak to the process of writing “Failing the Trapeze”? What were some of the challenges? Did you learn anything along the way?

SM: It is a first novel. I remember early on, I like to share this information with students, too, just by way of encouragement: it is challenging to figure out how to take on the scope of an entire book, as opposed to a story, or an essay, or something else you might have to write as part of your college curriculum. I remember laughing at myself and saying, “I feel like I just have to grow my brain!” Figuring out how to be thinking about a variety of moving pieces at once…

I did do research for the book. I did a lot of oral history work with my grandmother before she passed away about three years ago. At different points I went to a circus archive and did really any kind of research that one can do. There were plenty of hours that I spent online just researching period pieces. What do people wear in the 1920s? What music was playing on the radio? Different details like that, just trying to educate myself because essentially this is a work of historical fiction.

WM: Do you have any advice for aspiring writers at Seattle U?

SM: I often tell people that when I was in my 20s, so coming out of college… I always felt that I was sort of chomping at the bit and trying to run, run, run—thinking to myself, “I’ve got to get to the writing life.” Like it was going to be some open door at the end of a hallway, or some big prize or something. But somewhere along the way, in my mid– to late 20s I sort of stopped in my tracks and went, “I think this is the writing life.”

You always have a lot of balls in the air, and you’re always in the process of sort of getting somewhere, going somewhere. I share that with students hoping that it will alleviate some of the concerns they have. Because we’re living it, and that’s pretty darn beautiful.