Show us the Money: Inside Students’ Rallying Cry for Budget Accountability 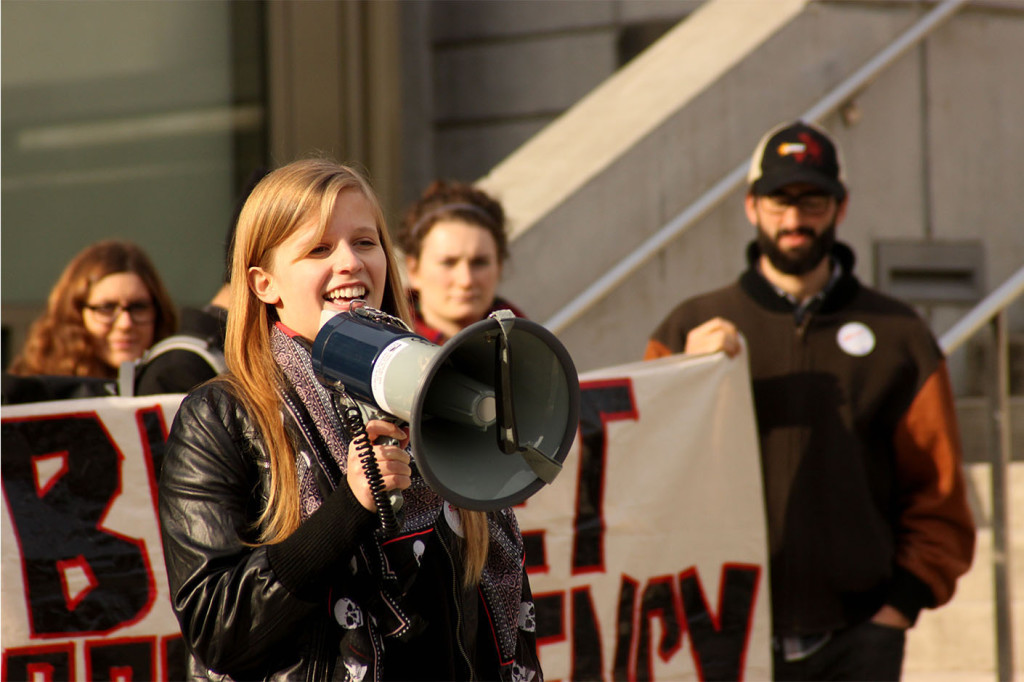 The typically quiet outdoor space in front of the Lemieux Library and McGoldrick Learning Commons transformed into a vibrant hub of civil disobedience on Tuesday as students, faculty and other supporters gathered for the Seattle University Budget Transparency Rally & Petition.

More than 30 supporters chanted passionately in unison and held signs, some in the shape of tombstones, that read: “RIP SU’s Social Justice Mission,” “JE$UIT” and “Show Me The Money.”

The rally, organized by Adjuncts and Contingents Together Washington, a project of the Service Employees International Union Local 925, aimed to make the administration aware of students’ and faculty’s growing unrest about budget transparency, and to deliver a list of demands to President Fr. Stephen Sundborg, SJ.

Senior French major Amanda Rodgers participated in the rally because she is concerned with how she thinks Seattle U spends its money.

“I came to [Seattle U] hoping it would be an institution geared towards academics,” Rodgers said. “I find that, in terms of what [Seattle U] spends its money on, it’s very rarely [spent on] the actual academic aspect.”
Rodgers believes that the university irresponsibly spends its money and that more of it should be allocated towards adjunct professors and students. She also said that too many resources go into non-instructional aspects such as sports, which should not be the main concern of the university, she said.

This belief was one of the key points highlighted during the rally and on provided informational fliers. One handout stated that in the previous year “Seattle U made almost $55 million in net income … the second biggest increase over the last fifteen years,” and that lower enrollment than expected caused a budget shortfall this year. It also suggested that burdens of the shortfall should not be passed on to faculty and staff, but rather by shifting the university’s spending priorities back to instructional expenses, as opposed to “non-instructional auxiliary expenses such as the student services building and athletics program.”

Besides members of ACT, students and members from the Reignite the Mission club also played a significant role in the rally. Club members handed out sheets listing twenty demands they had for the school, including budget transparency, administrative accountability and reforms to the sexual misconduct process.

Senior sociology major Olivia Engle recently joined Reignite the Mission and was one of the speakers at the rally. To pay for her education at Seattle U and cover the expenses of living in Seattle, Engle commutes, works multiple jobs and has shared a basement with two other people to cut costs.

“It’s a lot of inconvenience, but for me it’s worth it because I enjoy going to school here,” Engle said. “But when my money is being taken away from classes, then it’s not okay, and those sacrifices aren’t worth it anymore.”

Various adjunct faculty and ACT members, such as history professor Dr. Michael Ng and communications and journalism professor Dr. Louisa Edgerly, also spoke to the crowd to express their appreciation for supporters and to explain why budget transparency is so crucial.

“The administration has said that they are open to dialogue on this subject,” Edgerly said. “In order for true dialogue to take place, all parties have to have the same information.”

Edgerly said she was dismayed by news of the budget shortfall and witnessed her friends and colleagues lose their jobs because of it. She highlighted that if full information about what led to the budget shortfall and potential options for resolving it are not provided, then faculty and students will not be able to participate on equal footing with administration.

Participants, after practicing a handful of chants, marched toward the Admissions & Alumni Building, chanting the entire way.

“Our money, our voice!” Yelled the group. “When students and teachers are under attack, what do we do? Stand up! Fight Back!”

The protesters were told that Sundborg would be present for a College of Arts and Science meeting.

While protestors tried to enter the meeting, Chief Financial Officer Connie Kanter quickly turned them away.

“She had previously said that we were all invited to the meeting,” said Joshua Sturman, a senior philosophy major and Reignite the Mission member.

He mentioned that there was miscommunication and that she only meant to invite College of Arts and Sciences faculty members.

Undeterred by being denied entry into the building, protestors continued to chant and press signs against the window as they watched Powers and Sundborg speak to faculty inside.

Although they were unable to speak directly to Sundborg as previously planned, Sturman said that if the school does not respond to demands, then more rallies and similar efforts would occur throughout the year.

“If the school does not live up to its social justice mission we will start spreading the word to potential students, telling them that the school is lying to them,” Sturman said.

Photos by Audrey Mallinak • The Spectator