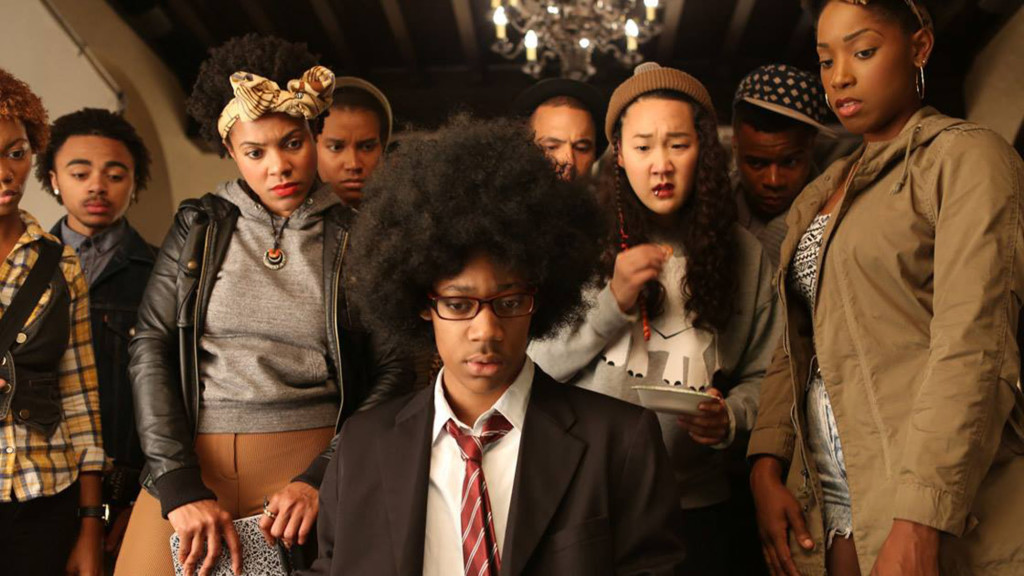 I’m a white student journalist at a predominantly white university in a predominantly white city, and I, like many of us in Seattle, claim to care about social justice issues. I’m troubled by inequality, a system that perpetuates it, and white people’s implicit or explicit role in that system.

But, as I’ve come to learn, caring does not necessarily mean understanding.

“Dear White People,” Justin Simien’s breakout film, shows Americans that, despite our black president and unwavering love for Beyoncé, we do not live in a post-racial America. The message is crucial at a time when, according to surveys, many white people believe that anti-black racism has been practically eliminated. But the movie isn’t exactly a “rant to white people,” Simien said in an interview on the Colbert Report; it’s about the complicated process of figuring out one’s identity.

With comedy and satire, Simien takes an unflinching look at racial politics in contemporary America. He shines a light on the identity challenges that black students face at a fictionalized, mostly-white Ivy League school named Winchester University. Using the elite school as a microcosm for race relations across the country, he exposes the still-enormous disconnect between white and black worlds.

Sam’s ex-boyfriend is Troy (Brandon P. Bell), a well-dressed big shot and the president of the school’s traditionally black student house. That is, until he is dethroned by Sam, who runs on a platform that objects the school’s “randomization” of housing policy. Troy’s dad (Dennis Haysbert) is the school’s dean—a notch below the university’s white head honcho, despite having received better grades at their alma mater. He pushes Troy to run for student body president. The implicit message is that because of his son’s race, he will have to work harder to make it to the top.

Meanwhile, Lionel (Tyler James Williams), a gay and somewhat anxious black student journalist who has trouble identifying with Sam or Troy, has been reporting for the alternative campus newspaper. The white editors of Winchester’s larger newspaper offer Lionel a shot to prove himself if he profiles Sam, a controversial story that would undoubtedly bring the paper visibility and perhaps help the editors secure future employment.

Coco Conners (Teyonah Parris), an assimilationist seeking TV fame, plays the role of Sam’s antithesis, positioning herself in Kurt’s circle in hopes of providing provocative material for a reality-TV producer who has been lurking around campus. Troy, too, wants to be in in Kurt’s crew because he secretly loves writing jokes. But he is forced to temper his aspirations for fear of not meeting his father’s expectations that he becomes Winchester’s top student leader.

These complex and unique individual narratives—all responding in their own way, it seems, to the whiteness that surrounds them—eventually intersect at an “unleash your inner Negro” Halloween party put on by Kurt and company.

The scene is gut-wrenching, hauntingly long and all too real. White students’ faces are painted black. They flaunt fake guns and gold chains and blast rap music. It is Lionel, floored by the absurdity, who leads the charge to dismantle the party.

A violent clash. Then nothing.

“Dear White People” does not end in social harmony. Sure, Sam walks off holding hands with her white teaching assistant she has secretly been seeing, providing some relief after the disturbing climactic action at the party.

The pain is momentarily subdued, but the underlying causes have not been addressed. As such, this film leaves many more questions than it answers.

Two years ago, a problematic decision by the Seattle University Spectator catalyzed a campus climate forum. Students and faculty were invited to share their thoughts and experiences with oppression at Seattle U. The forum, and the brave people who spoke out, revealed to me worlds fundamentally different from my own.

Seattle U’s campus climate forum, along with my conversations with black students and other faculty members, have painted a troubling picture: The reality depicted in “Dear White People” may not be too far from the reality on this campus.

Simien’s film points out that white people’s complacency and indifference can magnify oppression. We must first acknowledge that a problem exists. Vetted and deeply analyzed research and data show us that there is one. So, too, do personal stories.

“Dear White People” and its stellar ensemble invite a deeply important conversation about black faces in predominately white spaces. But the film doesn’t show us how to have it. That’s probably because there is no easy way to talk about race.

The experiences of these black students at Winchester are not ones I can truly know or understand. Making sense of that fact is enormously difficult, and I am confident that it does not start or end with seeing this film. If anything, Simien’s film forced me to challenge and concede the assumptions about race I was socialized to believe are true, and to be more curious about power and privilege.

Discomfort in this process is inevitable—necessary, even. But denial, the ultimate defense mechanism against an inconvenient truth, has harmful consequences. And they far exceed the unsettling sensation in my stomach when I speak or write about race.

In the end, “Dear White People” seems to say: Race and power and privilege are difficult to talk about, but these conversations are crucial.

Social justice, if that is indeed what we care about, demands it.