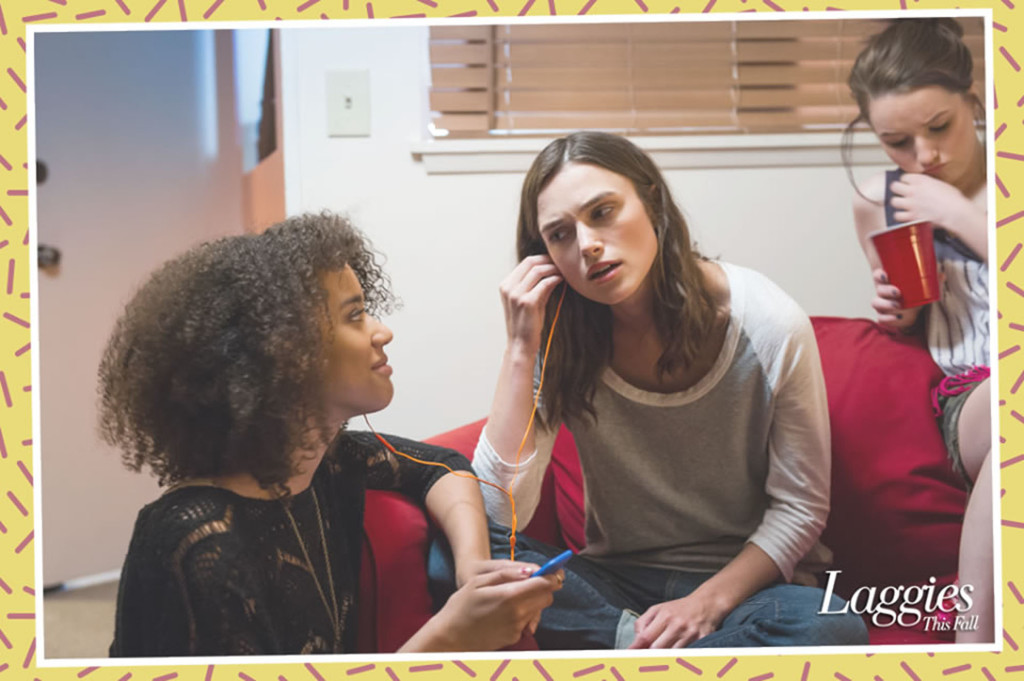 We’ve seen Keira Knightley as a pirate, an aristocrat and a duchess. She’s been a soccer star, a beloved literary heroine, even a queen.

Now, in her new film “Laggies,” she’s playing a loser. The aimless Megan, to be exact, who’s been stuck in a state of arrested development since she graduated from high school 10 years ago. While her Lilly Pulitzer–clad friends are busy getting married and starting families, she’s all too happy to lie on her parents’ couch and watch TV.

A surprise proposal from her longtime boyfriend sends Megan into a tailspin on the night of her best friend’s wedding, brilliantly set at the Chihuly garden. After fleeing the wedding, she encounters the 17-year-old Annika (Chloë Grace Moretz) at a Grocery Outlet and agrees to buy her alcohol. She tags along for a night of drunken adolescent merrymaking, and after giving an excuse to her earnest boyfriend, decides to spend the week at Annika’s place to try to get her life in order. Cue the attractive single father.

Romantic entanglements ensue, along with more plot threads than the film’s 99-minute runtime can reasonably handle. Director Lynn Shelton seems to have prioritized breadth over depth, which might have been a mistake—but it still goes down like bubbly rom-com champagne, so I’m not complaining too much.

The film was shot in Seattle and Bellevue in summer 2013. The director is a Seattle native, and it shows, thank god. There isn’t a single fish-throwing moment to be found, and I counted only one aerial shot of the Space Needle. Lake Union and Orcas Island are both mentioned, both plausibly. Shelton even has some fun with the relationship between Seattle and the Eastside. (For starters, two of Megan’s bourgeois friends plan to name their baby Jupiter, until they decide it’s too common and settle on Callisto. The joke may be lost on anyone who’s not familiar with Bellevue, but it got a chuckle out of me.)

Speaking of authenticity, I went in dreading the unrealistic teen-speak I’d likely be forced to sit through (“like, OMG, let me SnapChat this totally cool vid”), but the teenagers in this film actually speak normally, which is refreshing. See, it’s not that hard to write teenagers as real people. Take note, screenwriters.

The film has a lot going for it, but an elephant remains in the room. Knightley’s performance is charming as always, and her American accent, while jarring at first, is spot-on. She’ll never be anything short of a joy to watch. But her presence in this film is undeniably weird. From her ethereal features to her graceful air, she just doesn’t play a convincing deadbeat. She even looks lithe and chic in her character’s schlumpy wardrobe. I’m hardly convinced that she’s a mortal human being, let alone a loser.

Also miscast was Annika’s father Craig, played by Sam Rockwell. This may be superficial of me, but it’s a romantic comedy, so I’ll allow it: he was neither as cute nor as charming as Megan’s high school sweetheart Anthony (Mark Webber), whom we’re presumably meant to root against. I call bullshit. As a PNW native, I can pretty confidently say that the gentle-eyed, sensitive, bestubbled Anthony would do a lot better with the ladies in this town than some spiky-haired lawyer named Craig ever would.