‘Coming Out’ of Your Dorm Room 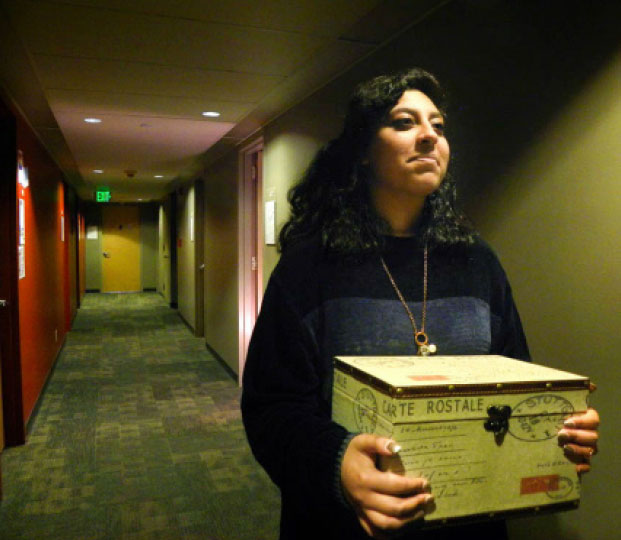 As a space reserved for privacy and comfort, a dorm room can say a lot about its residents. Sophomore Antonia Decker explores this idea in her photo essay, “Coming Out,” which will be on display outside the Hawk’s Nest Bistro.

During spring quarter of her freshman year, Decker asked several friends—and a few strangers—if she could photograph them in their dorm rooms looking as natural as possible. After the photo shoots, she had each person answer the following question on a sheet of paper: “In what ways have you come out this year?”

In a series of photographs of each person, Decker expresses the different ways in which these students “came out” during their freshman year—as writers, performers, athletes and more. In the Q&A below, Decker discusses the inspiration behind these photos and the experience she had taking them.

Sophomore Jesse Angeles, who met Decker through a mutual friend, came out by saying he hopes to join the Marine Corps.

“It’s something I’ve been really dedicated to for the past year or year and a half, and it’s something I want to pursue after college,” Angeles said. “[The photo shoot] was fun. It was just us in a room, playing music, talking and doing whatever.”

In one series of photos, sophomore Rukhsar Palla came out as a writer. Palla, who filled over 10 journals with poetry during her freshman year, said that writing was the obvious choice for her shoot.

“One thing that I think Antonia is really good at doing is capturing people in the moment,” Palla said. “If you’re actually friends with the people in the pictures, and you look through them, you’ll notice that she’s captured each person’s personality. The room is complimenting them, but she really captured them.”

The Bistro will host an opening for Decker’s exhibit on Nov. 7 with performances from some of the students who were photographed, including a poetry reading from Palla, a kung fu demonstration by sophomore Khyree Smith, and music from sophomore Paul Fitzpatrick and his band Champagne Babylon.

JR: What inspired you to take on this project?

AD: It was actually an instance in my dorm room. I was just lying on my bed, and I could hear, across the hall, a girl sobbing. At the same time, I could hear someone playing their guitar, and another group of people just laughing a lot. It just kind of intrigued me that everyone was doing their own thing in their own little world. I thought of the dorm room as kind of a stage, and the students were the actors in their own plays.

JR: What was the experience like taking the photos?

AD: It was actually really humbling in some senses because not all of [the students] were my friends. Some were just acquaintances. And so for them to let me into their spaces and see them at their most vulnerable was really humbling. We were able to quickly break down any barriers between us, and it just felt very natural.

JR: How did you set up the photo shoots?

AD: I told [the students] the concept of the whole project beforehand. I already had it in my mind that there would be four consistent images per person. The first one would be of their door. The second was going to be of their dorm, and I told each student to act as if I wasn’t there. I asked them, “If your roommate was gone, what would you be wearing? What would you be doing?” I tried to get them in their most relaxed state. The third photo is of the students really getting ready to “come out,” and not necessarily in terms of sexuality, but in terms of coming out as a musician, or a poet, or a kung fu master, or a badass. The last image would be of them actually coming out of the door, so I would instruct them to come out as a representation of what they were kind of blooming as, as an individual. I had the set idea of it in my mind, and would explain it to them, but there were definitely different takes on it from person to person.

JR: How did you choose the people you photographed?

AD: I wanted to get a wide range of people in terms of diversity, sex, personal background and experiences. Some of them were my friends, and I already knew I wanted to have them in my project. Others were just people I had seen around campus, and it just clicked that I really wanted them to be a part of it. I just approached them, told them a little about the project, and went from there.