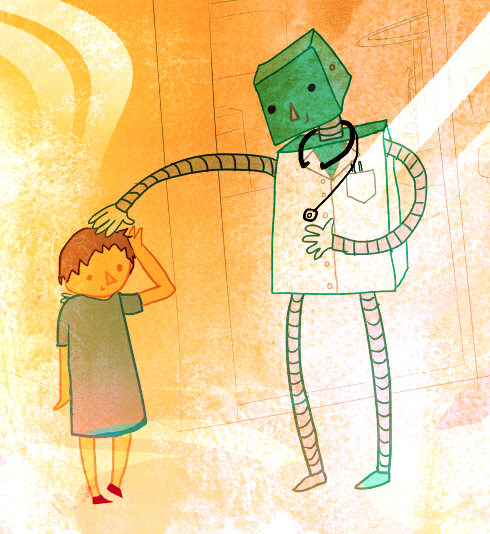 Let’s face it: human labor is becoming obsolete. Compared to a slow, inefficient, expensive humans, the fast, effective, highly accurate and definitely cost-effective robots are beginning to take over the marketplace at an increasingly rapid pace. Fast food restaurants are already beginning to try out automated workers to take orders, and everyone from pharmacists to doctors to soldiers and babysitters are projected to soon be replaced by robot professionals (4,5). The coolest (or scariest, depending on your perspective) part is that it’s not just a future thing; it’s happening now. In the healthcare field, diagnostic computers (robot doctors, if you will) are being used to filter through masses of data to properly diagnose diseases.

Experimentation with robot doctors has been going on for the last few years. For example, Watson, IBM’s supercomputer and just about the closest thing we have to functional artificial intelligence, has integrated gigabytes of data on diseases, symptoms, and key information from the patient’s chart to deliver a diagnosis (with a certain degree of certainty) (2,3). Lifecom is also putting a tool called Distributed Analytics, Reasoning and Educational System (DARES) into clinical trials (1). DARES is a way to integrate electronic medical records with vast amounts of disease data and diagnostic criteria to expedite the diagnostic process. So far, the results seem to be promising. Accuracy of diagnosis with a computer is higher than doctors alone, and can be done without many of the more expensive tests, such as an MRI. Using such a diagnostic tool can also decrease human biases, as personal experiences or cognitive bias can prevent the correct diagnosis from being made. It also has the advantage of having access to terabytes of medical data that humans simply can’t retain all at once, even with continuing education and rigorous study. The result is an efficient, accurate, and impartial diagnosing machine. What’s not to love?

The people who argue against technological advances like this often object to the fact that we are still in preliminary trials. The robots we have now are not as sophisticated as they are going to be, and they aren’t as integrated into the whole healthcare system as they may be someday. Right now, it’s choppy and nascent. Such diagnostic tools cannot integrate easily with current medical record systems, and implementing such a program can drastically change the normal flow of a clinic or hospital. People also often refer to the lack of warmth and comfort a robot exudes. It’s not fun to be told by a robot that you have cancer (well, it’s not really fun at any time), so in the next few years, robot doctors will likely remain on the sidelines and leave the sensitive talking to the humans. As the technology exists now, it seems like a perfectly suitable supplement to current medical practices as a diagnostic tool. In the future, it may be an entirely different field.

In addition to these fancier diagnostic tools, there are also a host of smaller applications and programs that do similar analyses for specific areas of medicine, such as dermatology. As Fortune reports, “Dermatology appointments could be handled by CellScope, which produces low-cost iPhone attachments for imaging skin moles, rashes, ear infections, and (in the future) your retina or throat. Those images could be processed by algorithms to detect patterns that warrant closer inspection.”

With all this new technology, there will undoubtedly be backlash against using such powerful tools, especially because as computers like Watson get more integrated and more intelligent, the socioeconomic dynamics we’ve grown accustomed to will irrevocably change. We’ve seen it in the past, and we are seeing it now as we experience leaps of technological advances with networking, mobile computing, and energy efficiency. People will also object to the lack of human connection in the looming face of technological expansion; we may lose ourselves in a haze of information and entertainment, and not focus on art or human contact. They may say that robot doctors or nurses will never have adequate bedside manner or the warm, friendly touch of another human. Although this may be true for the next couple of decades while we are refining the technology, the paths this technology could travel are nearly limitless. Androids (humanoid robots) may become a staple in healthcare. In the not-so-distant future, we won’t be driving cars by ourselves, but having our cars do it for us. We won’t be hand-constructing buildings or large machinery , and we may not even be taking care of our own children, but instead may have automated factories or android nannies. It’s only a matter of time and a shift of public consciousness. Robots have a huge place in our future as a species, and its merely decades before they have sunk themselves so deeply into our lives we don’t know what we would do without them.