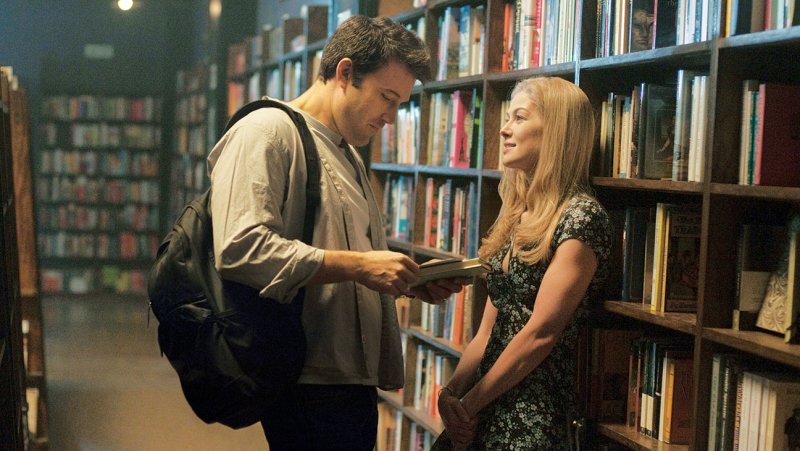 “Gone Girl” is a murder mystery involving a ludicrously normal couple with a ridiculously complex story arc. In the film’s opening shot, we see the wife Amy, played by Rosamund Pike, staring straight into the camera.

Her husband Nick, played by the undeniably villainous Ben Affleck, narrates his character’s thought process: “What are you thinking? How are you doing? These are the primal questions of every marriage.” The look Amy gives the camera simultaneously projects devotion and domestic insanity. Pike speaks volumes with her intense blue eyes throughout the film.

Now that an intrigue has been set, director David Fincher can show us just how twisted the perfect couple can be. Nick comes home on the night of their fifth anniversary to find his dear wife Amy missing. A search ensues, and the pendulum begins swinging.

From an outside perspective, the situation appears foul at best. Nick seems to not even know his own wife and, as the only suspect in the developing case, he casts a bad shadow in the limelight.

Detective Rhonda Boney, played by Kim Dickens, is put on the case. Detective Boney investigates Amy and Nick throughout the film, following a breadcrumb-like trail of clues. Amy appears initially as an innocent victim, with Nick’s smarmy smile and appeasing demeanor characterized as rude in his wife’s absence.

Amy, we learn, has been characterized and illustrated in a series of books her parents wrote titled “Amazing Amy.” The books are a source of much admiration and publicity, which her parents use to amass a following after her disappearance.

However, her parents, played by David Clennon and Lisa Banes, are oddly uninterested in their daughter, unless she brings them money or publicity. (Incidentally, makeup artists did a superb job with Clennon’s face, bringing out his wrinkles and sagging eyelids.) The parents always appear together on screen, providing perspective for Amy and Nick’s relatively fresh marriage.

The story’s twisted plot unravels throughout the movie, gradually revealing new dimensions of each of the characters as the storyline progresses.

The smooth transitions and uncluttered scenes draw suspicion out from its dark hole in the bottom of our stomachs. Fincher also didn’t hold back on the sound effects, which range from creepy indoor crickets to car alarms and home security systems.

The film is adapted from the 2012 thriller novel “Gone Girl” by Gillian Flynn, who also wrote the screenplay for the film. As many authors do when overseeing their book’s transition from paper to screen, she stuck very close to the book’s plotline, giving the film a runtime of 145 minutes. Unfortunately, the film’s long timespan detracts from its quality.

“Gone Girl” starts out strong, with themes of feminism and rebellion, but soon leaves these values in search of thrills and flashy Hollywood editing. Holes in an initially airtight story develop, and Affleck’s character never seems to be fully realized. His values remain unclear, and his obnoxious grimace is never fully shed, making it difficult for the audience to connect with his character.

But the film is saved by undoubtedly its most interesting character: Amy. Her unrelenting desire to live the life she has always imagined, beatifully rendered by Pike in a star-making role, never grows stale.