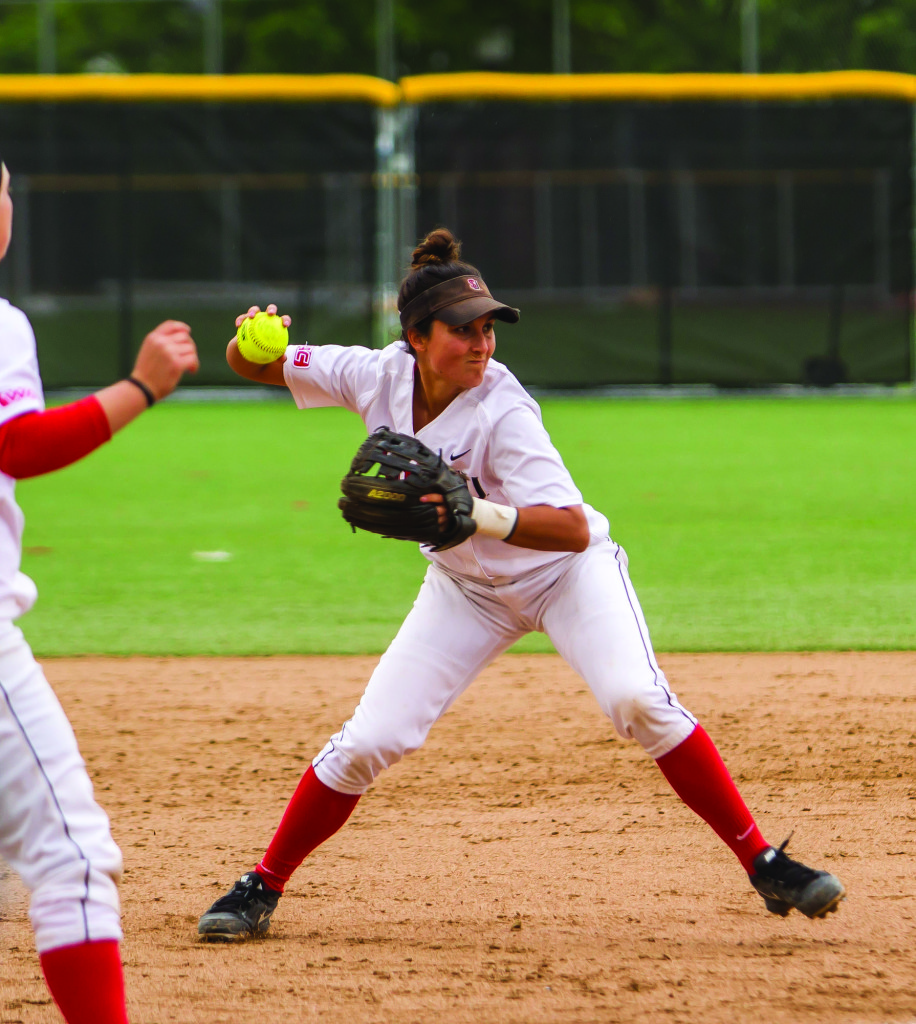 The city of Seattle held true to form on Thursday, May 10 and rained out most of the day’s planned softball action. Once the rain allowed it, Seattle University hosted the WAC Championships at Seattle U Park. After a compressed schedule that saw many forced double headers, Utah Valley University (UVU) won its first ever WAC Softball championship in a 7-6 upset over top seeded New Mexico State (NMSU) in the final. Game 1: Utah Valley (UVU) vs. California State University Bakersfield (CSUB) The first game of the weekend started with two scoreless innings. In the bottom half of third with one runner on base, Amanda Robinson hit a home run over the left field wall for a 2-0 UVU lead. The Wolverines never looked back after that point. UVU got another run off an RBI single by Brianna Gatlin in the same inning, followed by their final run in the fourth. CBSU would chip in a run in the final frame, but it was far from enough to complete the comeback as UVU won 4-1. Game 2: Seattle Univeristy vs. University of Missouri Kansas City (UMKC) Seattle U’s battle with UMKC, which was originally scheduled to start at 11:30 a.m., was pushed back to the final time slot of the day due to consistent rainfall. With a 1-1 tie after one and a half innings, UMKC shelled Seattle U in the bottom of the second for five runs creating a 6-1 lead. The burst was capped off by a two run home run from Caitlin Christopher. It kept coming in the fourth as UMKC poured in two more runs making it 8-1. The Redhawks would make it interesting by scoring two runs in the fifth and seventh innings respectively but it wasn’t enough. The game ended with an 8-5 final. “We battled back tonight and hit the ball hard for most of the game,” said head coach Dan Powers. “We let things get away from us early with a few physical and mental mistakes.” The loss put the Redhawks in a do-or-die scenario for the rest of the tournament. 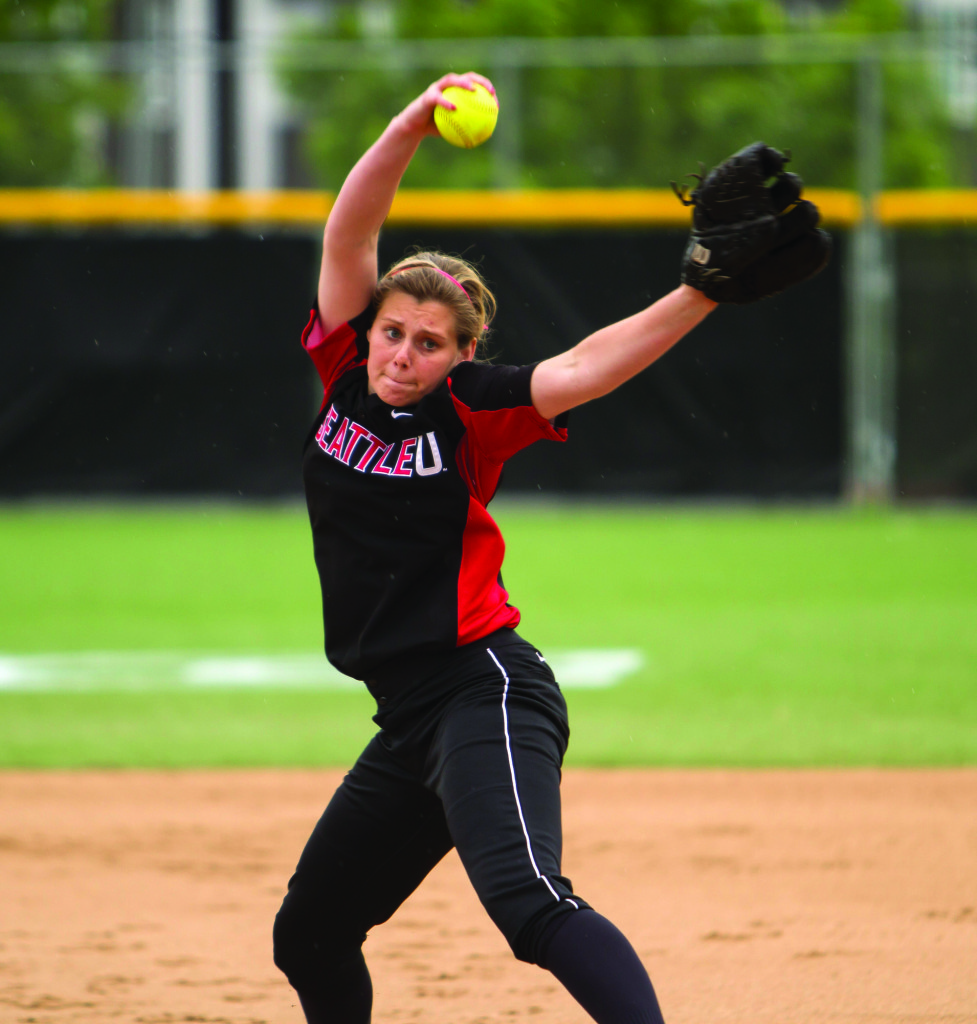 Photos by trevor umbinetti • The Spectator

Freshman Lindsay Davis pitched 4 innings in the Redhawks first outing in the WAC championship at Logan Field on May 8. She allowed 7 hits and 6 earned runs and 2 unearned. The Redhawks lost 8-5 to Kansas City.

Game 3: UVU vs. New Mexico State (NMSU) To begin day two, UVU cruised to a 4-1 victory over NMSU in the first match up of the future finalists. With a narrow 2-0 lead entering the sixth inning, UVU chipped in two more runs to secure the win. Amanda Robinson and Britney Vansway each recorded RBIs in that frame. Josi Summers blanketed NMSU from the circle for and allowed no runs which earned her the win after six innings of work. NMSU could only score one run in their final at bat. Game 4: SU vs. CSUB The scoring opened in the second inning by a questionable no-tag call at home plate in favor of CSUB. However, that would be the only shift in score for Bakersfield as Richelle Ashburn dominated the game for the Redhawks. Lisa Malden answered in the bottom half of the second with a home run

to right field to tie the game. Bubba Morrow put Seattle U over the top for good in the third with her own solo home run, leaving the score at 2-1. Ashburn pitched a complete game and earned the win after allowing five hits and striking out three batters. Game 5: UVU vs. UMKC UVU’s pitching was dominant again in their third game of the tournament on Friday afternoon. Josi Summers held UMKC scoreless in her six inning of action from the circle. Bailey Moore kept up the stifling pace in relief and kept the scoreboard barren. With a 0-0 tie entering the second half of the fourth inning, UVU scored the clincher. With the bases loaded, Megan Peay hit a sac fly for the RBI. That run was all UVU needed as the pitching staff threw the shutout. The 1-0 victory secured UVU’s spot in the championship game after only allowing two runs in three games. 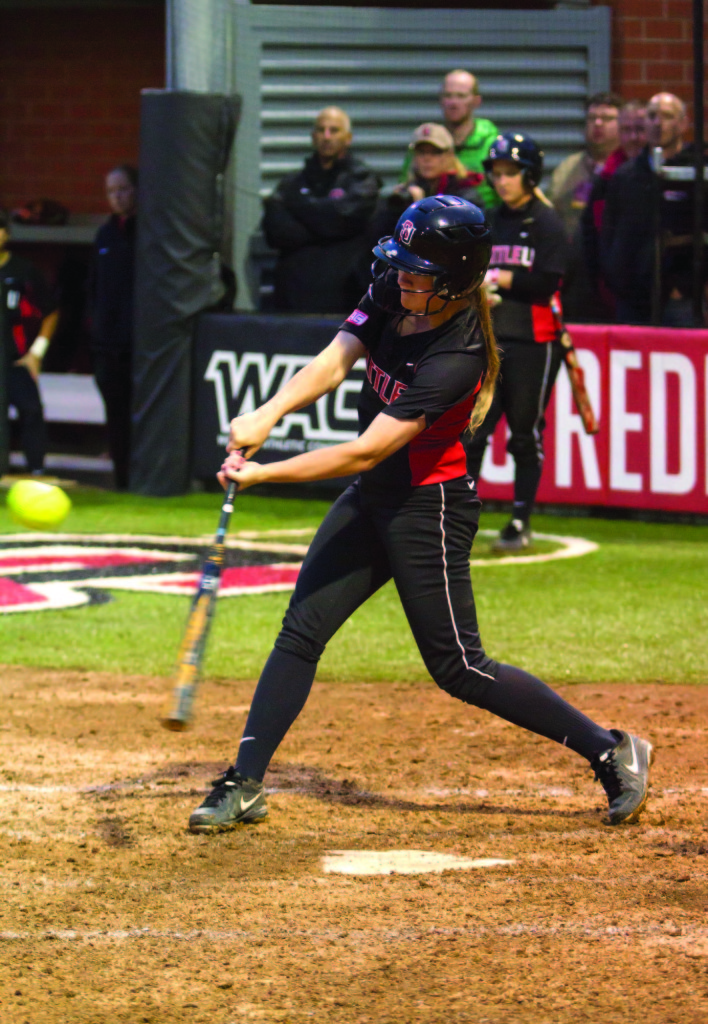 Photos by trevor umbinetti • The Spectator

Second baseman Paige Bouska hit a single in the 5th inning with an RBI. This began a 2 run comeback attampted to bring the score to 8-3. The Redhawks lost 8-5.

Game 6: SU vs NMSU The Redhawks season was on the line in their second matchup with NMSU and it did not start well. NMSU managed to load the bases in the very first inning after two walks and a double by Fiana Finau. Then Aggies outfielder Malena Padilla crushed a grand slam to right field, sinking Seattle U into an early 4-0 hole. After facing one batter in the third inning, Seattle U pitcher Alyssa Reuble was replaced by Mandi Sugita. Kelsey Dodd then hit an RBI single for the Aggies which fueled the defect to 5-0. But Seattle U was not ready to go out quietly. With a runner on first and third, Isabella Geronimo singled to right field which scored Brianna Guerrero. The shot stop Paige Bouska hit a two RBI double to center field which brought the Redhawks to within two at 5-3. With Bouska on second, Jenny Hurst hit a ball to deep right field which stole the breath away from many spectators and looked to be a game tying home run. However it was just short and caught to end the inning. After no hits by either team in an inning and a half, senior Karina Smyth kept the season alive with a base hit in the bottom of the seventh with two outs. Geronimo was then struck out swinging and Seattle U’s season came to a close. “We fought and gave ourselves chances,” said Powers.”But we just kept misfiring and it wasn’t enough today.” The game would be the last for Redhawk seniors Karina Smyth; Richelle Ashburn, Brianna Guerrero, Jennifer Sweet, and Sarah Petosa. “The seniors battled all four years from where the program was at when they started,” said Powers. “The difference has been night and day.” “Just to see that growth over the four years has been amazing,” said Smyth. “Not only talent wise, but the maturity level as well and just seeing how close our team has grown will be the biggest take away for me.” Game 7: UMKC vs NMSU In the final matchup of the day, NMSU hammered UMKC 12-3 to earn their spot in the finals UMKC jumped to the lead early of an RBI single in the first inning by Caitlin Christopher. The Roos would tack on another in the second for a 2-0 lead, when Brooke Parker grounded out allowing Marlee Maples to score. Facing a 2-1 deficit to start the last half of the third inning, the Aggie bats started heating up. After two runs had scored off four hits, Tatum Reedy cracked a double down to left center which scored two runners. Despite a UMKC pitching change in the 4th inning, the Aggies continued to pour 7 more runs, three in the fourth and four in the sixth respectively. The convincing victory set up a rematch between UVU and NMSU in the final on Saturday. GAME 8 (Final): UVU vs NMSU With the season on the line and already facing a 1-0 deficit after one inning, NMSU came out swinging to start the second. After a ground out, Kelsey Dodd homered to right center field to even the game at 1-1. Later in the at bat, with one runner on base, Tatum Reedy hit a bomb over the left field fence to snatch a 3-1 lead for the Aggies. NMSU tacked on another score off an RBI single from Staci Rodriguez. After three innings the game was in the Aggies hands at 4-2. When the fourth inning came around, the Wolverine offense found its rhythm. A pitching error by the Aggies followed by a walk put a runner on first and second for UVU. Then with two outs on the board, Debra Lovell took advantage and smacked a home run straight down the center. In one play, the Wolverines regained the lead at 5-4. Back to back doubles from Brianna Gatlin and Brittney Vansway notched another run for Utah Valley. The Wolverines would score their final run in the sixth extending the lead to 7-4. It all came down to the final at bat for the Aggies, and they started it with a bang. Staci Rodriguez hovered over center field to tighten the gap. A pop fly would push Finau to third base, who then took home off a wild pitch and sliced the lead in half. However it all ended when Malena Padilla hit into a ground out, sealing UVU’s first ever WAC softball title.