I went to my first big-time conference this week: the American Academy of Neurology’s annual meeting. How was it? Kind of a tiny bit terrifying at first, but really fun and surprisingly laid back.

The meeting took place in the conference center in Philadelphia; it’s a big, pretty center with more rooms than I could count, gigantic exhibition halls and random shops to buy touristy things and food. I got there at 7:30 in the morning to pick up my badge, then headed over to the poster hall to present some research I did last summer with a great group of people from Swedish. Even with minor sleep deprivation, I was way too excited to be nervous once I got there. I was at a conference. Presenting research I did. WHAT?! 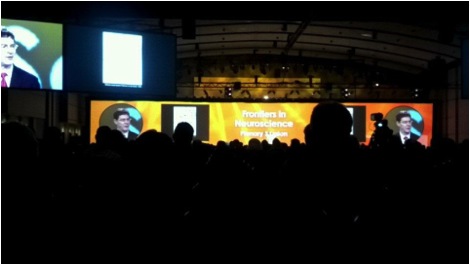 The plenary session; this was a guy talking about the connectomics project and its latest jump into really specific looks at connections in the brain.

Poster Sessions:
The excitement of being at the conference wore off a tiny smidge after the fifth person asked me to explain the poster, but I was still wired on science. Poster sessions are usually for the less-shiny but still relevant area of science centered around either exploratory concepts or continuing research into specific, established hypotheses. People come up and stare at the poster for a bit, then, depending on level of awakeness/interest, will ask you to either explain the whole thing to them or ask just a few questions for clarification. Easy peasy. I got to converse with some great neurologists and medical students, and gained some perspective on why poster session-type research is so important. It’s important because it’s like the flour in the cake of science; it forms the bulk of scientific knowledge. The seemingly less showy science (small clinical trials, retrospective studies, experimental studies exploring new-born hypotheses) is what lets us know what actually works and what doesn’t. The more of the flour research we have, the more substantial our science cake will be.

Exhibition Hall:
The exhibition hall? More like the drug hall. Tables upon tables of drug representatives formed lines up and down the massive hall, with large oases of coffee bars with drug names floating overhead peppered the middle. Journals, technology representatives, publishing companies and other merchants filled in the other tables. The most fascinating thing to me about the exhibition halll was the drug advertising. The drug companies had clearly spent some dough on getting their booths to be extra shiny, engaging, and, most importantly, overflowing with free stuff. One booth had a glowing, mechanical display of proteins interacting; another had multiple screens with interactive displays showing how their drug worked. Booths were giving away free coffee to passerby, along with various foam central nervous system pieces (most popular, of course, were stress-relief squishy brains). Drug advertising is a curious thing; Americans seem to be the most obsessed with prescribing drugs for everything, especially if it has a brand name; we’re patent obsessed, money obsessed, and willing to do a lot to get people to notice what we’ve made. I suppose it’s not a big surprise; getting a drug to market costs, on average, between $800 million and $1 billion (1). So, why not show off a little and get people to make all that testing worthwhile (slight sarcasm)?

Frontiers in Neuroscience:
The best part of the conference was the plenary session. Titled “Frontiers of Neuroscience”, the session consisted of six researchers who presented unique challenges and new research in their fields. Topics ranged from the connectomics project and DTI imaging, connectomics and disease models, robotic physical therapy, and stroke recovery. Each talk covered multiple studies and gave a great overview of the field of study and the most recent additions and hypotheses. Articulate, intelligent people presented their research in a clear and concise way that was thoroughly inspiring, both in presentation and in content. What I heard just made me realize that I belong at stuff like this. I think I had a stupid smile plastered on my face the whole time, especially when listening to someone talk about signal transduction pathways in differentiating glial cells in stroke recovery. I got to hear some of the smartest, most motivated people in the field; I hope that someday I’ll be up there talking to people about the coolest research, inspiring young, weird science enthusiasts like myself to keep on going.

I’d say, as far as first big-time conferences go, this was a winner.