Out With The Old, In With The New On Cap Hill 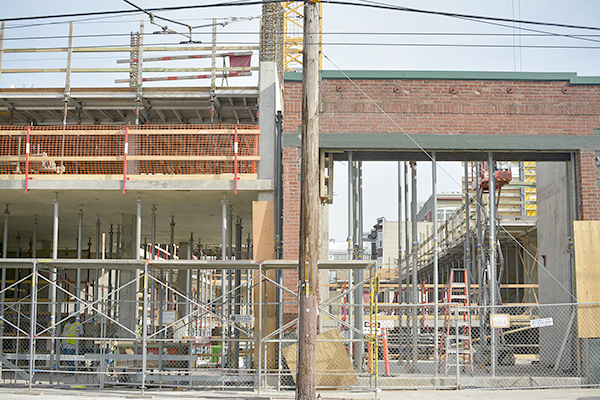 Many of the major buildings you pass on Capitol Hill have one thing in common—big windows.
Once known as “Auto Row”, these big windows were once used to let shoppers see the floor of auto-markets where shiny new vehicles would be sitting, waiting to take their part in the auto revolution.

Now, the glass serves as a window into a different kind of life and culture—the view of cafes and retail stores are the modern snapshot of life on the Hill. Here, history and modernity combine, with buildings that are morphing the two.

Years ago, the automobile industry played an intrinsic role in the development of Capitol Hill. Avenues that were once filled with tracks for streetcars were torn apart to make way
for cars.

Now a major attraction to tourists and a beloved neighborhood to Seattle natives, Capitol Hill is facing a new kind of buzz as developers both national and local try to get a piece of the boom that has graced this area.

But with development comes a handful of problems, particularly one as rapid as this. During a lecture organized by the Seattle Architecture Foundation covering the past and future of the Pike and Pine corridor, there was an underlying current of concern over how fast this development was happening and how detrimental it could be if left unchecked.

In general, to keep track of costs and to make the margins, developers usually build up to cover for any losses, a trend noticeable in almost any city. Capitol Hill is no exception to this easy route, but there are developers who are willing to bargain that not everything has to go up.

“I get the question all the time ‘how do you make a project economically feasible? How do you not build up?’” said Michael Oaksmith, one of the people involved in the development of the neighborhood. “[You appeal] to the more creative out-of-the-box thinking ‘users.’”

But that’s not the only dilemma that faces this neighborhood. Local developers also face competition with national firms ready to claim a plot of their own to develop.

“There’s always going to be competing interest in the neighborhood; neighbors need to be involved,” said Stacy Segal, executive director of the Seattle Architecture Foundation.

Local input is paramount if Capitol Hill is to keep on thriving as it is now, but then again the local neighbors are more involved than one may suspect.

“There are a lot of people that care about the neighborhood that they live in, including landowners. I’m encouraged that we will contain our village feeling we got going on here,” Oaksmith said.

Additionally, the buildings’ integrity, particularly those which have been here for years, sustain the character of the neighborhood. Capitol Hill is special in this way because of how, as conservation consultant Michael Sullivan, puts it, “No pages have been torn out; no serious deletions have been made here.”

What you could call a boom in the development of Capitol Hill, like any major change, runs the risk of losing what has made this neighborhood so charismatic.

Then comes the actual work of developing or renovating new buildings. There are no real empty lots in the area, so if a developer would like to have a project there are a few avenues of exploration for creating these new structures. One avenue of development would be to renovate current structures and to breathe new life into the building, keeping much of what is stressed as “character” of the neighborhood intact.

The other avenues of development include tearing down the structures already there and putting up new ones. In this, developers may also indulge in what can be called “facadism” where, in following the trend of trying to keep the original identity of the building, they keep the lower level’s outer walls, the part of the building that most traffic see intact as everything else is scrapped.

But as Eugenia Woo, director of preservation services at Historic Seattle, puts it, “preserving facades, is not preservation.” She also adds, “Is there an acceptable level [of preservation]? Not every old building can be or should be saved. But new development should be more sensitive to existing and historic context.”