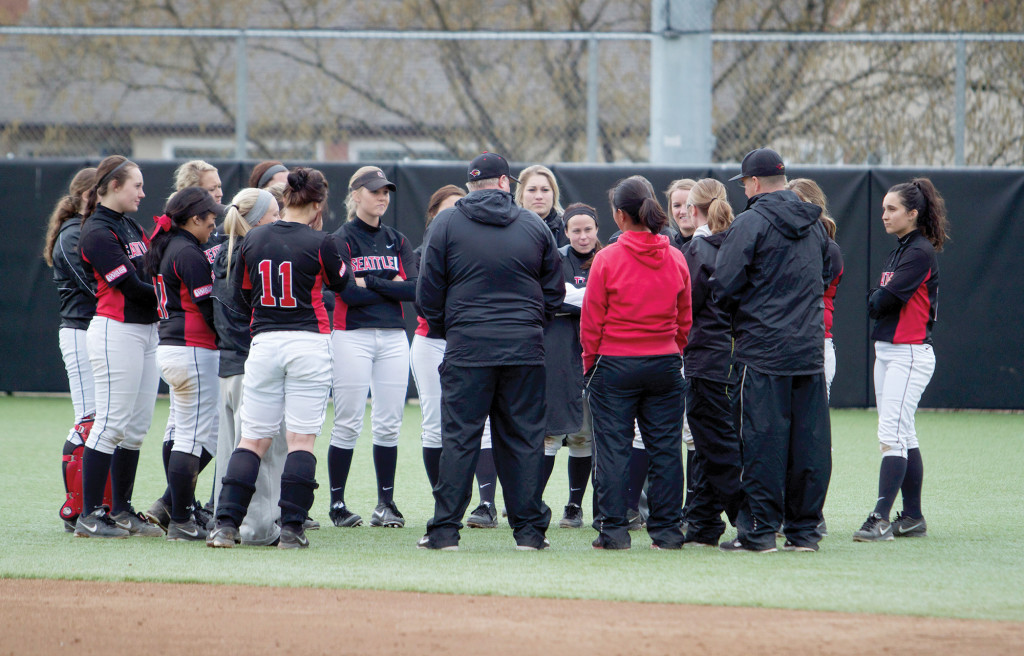 The Seattle University softball team lost in a tight offensive thriller Saturday afternoon to Utah Valley University (UVU) 13-12. Despite the individual game loss, the Redhawks won the series after sweeping Friday’s double header with each game decided by a single run.

The first matchup was a nail biter as the Redhawks put up four runs in the seventh inning capped by a Paige Bouska single to win it 8-7. The second game was a showcase of pitching that Seattle U won 4-3. It was the first home conference series for Seattle U who now sits with a conference record of 2-5, 13-25 overall.

“Winning the series was huge,” said head coach Dan Powers. “It’s good momentum at home and setting up for the WAC tournament next month. Glad to see some people who haven’t been contributing most of the year now starting to get comfortable in their positions, and we’re doing alright.”

The Redhawks started off strong on Saturday with four runs in the first inning that were sparked by Isabella Geronimo’s lead off solo home run. After a few more runs resulted from a couple UVU errors, combined with solid pitching at the start, the Redhawks maintained their 4-0 lead through two innings.

After UVU scored two runs in the top of the third, right fielder Megan Ottino would answer for the Redhawks with a double that scored Karina Smyth and Lisa Maulden in the bottom half of the frame.

UVU put up two runs again in the fourth, but this time it was Maulden’s turn to answer with a double that would bring in Bubba Morrow. Maulden promptly scored a run after that play through another UVU error.

With an 8-4 score at the top of the 5th, the UVU offense heated up and scored 5 runs before the third out was made for Seattle U. Then after a scoreless split inning, the Redhawks began their 6th inning at bat down one run. With runners on second and third bases, Paige Bouska brought back the excitement and hit a single that put Seattle U in the lead 10-9.

However, at the top of the seventh inning the Redhawks would endure another UVU offensive barrage as 4 runs were put up sending the Wolverines to a 13-10 lead after the top half of the frame.
Facing a tough climb at the start of the bat and with one out already, Morrow hit a single bringing Maulden back to the plate. After three hits, Maulden crushed a two run homerun deep over center field, giving her a perfect day at the plate and bringing the Redhawks within one run of UVU. In the end, it was not enough—Seattle U ended the game with a ground out.

“The team battled at the plate all weekend and we scored a lot of runs but our pitchers got to keep the ball in the park,” said Powers. “If we do take care of that then we’re back to taking care of all three phases; pitching, defense, and offense. We were missing one today.”

The Redhawks will continue their conference schedule with a double header on April 9 at Portland State, followed by a three game home series against Kansas City next weekend.