Hollywood seems to be going through a biblical phase. Last month’s release of “Son of God” marked the beginning of what some are calling “the Year of the Bible” in Hollywood.

When The Bible series premiered on the History Channel in 2013, it attracted more than 13 million viewers and the series finale attracted an audience even greater than HBO’s Game of Thrones—the Christians really love their faith-based television. Its success proved that there was a wide market for biblical epics—it wouldn’t behoove the film and television industries to continue ignoring it.

Now, the film industry is trying to capitalize on that market like it’s nobody’s business. Over the next 11 months, the film industry is set to release more large-scale movies about the good book than it has in the past 11 years, according to The Daily Beast. And that doesn’t include all the Bible-based films that are stuck in the early stages of development—even more await in 2015 and 2016.

Here’s a glimpse at some of the Biblical epics in the works—I’m praying they’re better than “Son of God.”

Directed by Darren Aronofsky (“Black Swan,” “The Wrestler”), “Noah” tells the story of Noah’s ark in, what appears to be, the most dramatic way possible—the trailer features bombastic music, a scared Emma Watson, triumphant hordes of exotic animals, and an epic battle scene.

The film has already stirred controversy, as it is more so based on Ari Handel’s graphic novel “Noah” than it is on the actual Bible—Handel’s novel makes Noah look more like a relative of Thor than of Abraham, Isaac or Jacob. Aronofsky’s version of the novel also appears to be set in a post-apocalyptic Scandinavia—all the characters are Caucasian and dressed like Vikings—instead of the Middle East. 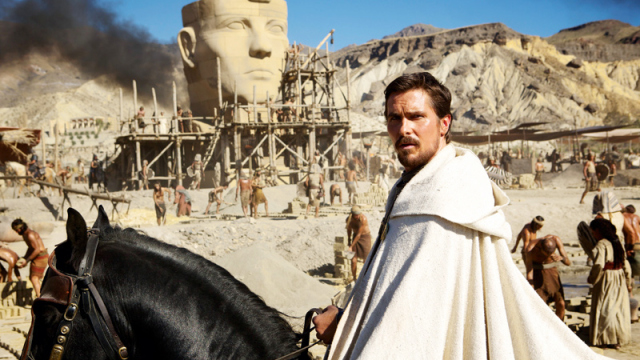 Our first look at Christian Bale as Moses in Ridley Scott’s “Exodus.”

Twentieth Century Fox is set to release director Ridley Scott’s (“Alien,” “The Counselor”) take on the Israelites’ exodus from Egypt. Christian Bale stars as the beautifully bearded Moses, which was a wise casting call—if Batman can’t part the Red Sea, no one can.

Mary | 2015
Academy Award-winning actor Ben Kingsley is attached to upcoming biblical biopic “Mary,” which will explore the trials and tribulations of being a teenager and being the Mother of God. Now in pre-production, the film will cast glimpses into various periods of the Virgin Mary’s life both before and after the birth of her bouncing baby boy. To my delight, the film’s producers actually cast an Israeli actress to play Mary—the stunning Odeya Rush, who will also appear in this year’s on screen adaptation of “The Giver,” will assume the role of the Blessed Virgin.

Goliath | TBD
Dwayne “The Rock” Johnson is in talks to play Goliath and Taylor Lautner has been offered the part of David in the film, which is headed by the producers of “Twilight.”

Pontius Pilate | TBD
Rumor has it that Brad Pitt is attached to the lead role in “Pontius Pilate,” which will tell the story of—guess who—Pontius Pilate. The film will supposedly portray the notorious Roman prefect in a more sympathetic light than we’ve ever seen him before—he is made out to be an ignorant and overwhelmed soldier instead of a heartless, godless villain.

God help us all.