Oh My Science: Homeopathy is Not My Homie

Being someone who cares about science, there are some ideas that we as a society have that just make me want to pull my hair out and scream, “WHY?!”. Anti-vaccination, treating cancer with food choices, avoiding microwaved foods (see last week’s column), or thinking that God causes natural disasters to punish us are only a few of the puzzling ideas that top the list of things I wish weren’t things. Another one? Homeopathy. Why? NO SCIENCE.

There’s always going to be that portion of the population that wants to be as close to nature as possible and be free from chemicals and scary, harsh treatments. It’s often a worthy goal, but sometimes it just DOES NOT WORK. Cancer can’t be treated by eating the right foods; your cells’ genes are literally going haywire and not controlling growth or cell adhesion/cohesion, and unless you’re eating tons of a food that is toxic to your cells and could kill said cancer, then it is not doing anything. Same with homeopathy— the mechanism of action does not make sense with how we understand modern disease. Let’s walk through the theory, and then walk through why the theory is very likely not true. 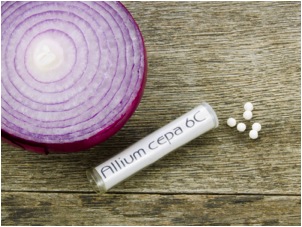 Via The Society of Homeopaths

1. Same cures same
This principle says that if something causes certain symptoms, then if a disease also causes similar symptoms, a dilution of the first thing can help the body turn on its defenses and eradicate the condition better. Taken from a natural health website:

“For example: A person who chops an onion can develop watery eyes, a runny nose, sneezing, coughing, and throat irritation from exposure to the onion’s active substances. The homeopathic remedy, Allium cepa, made of potentized red onion, can help the body overcome a cold or allergy attack in which the person has similar symptoms (watery eyes, runny nose, sneezing, coughing, or throat irritation.) The actual symptoms of the illness were not caused by exposure to an onion, but the remedy made from the onion can help the body overcome them, because the symptoms are similar.” (1)

The logic of this is ancient and outdated (remember Hahnemann up there?). Considering that we know how most common diseases start and how they mess with our bodies, its totally puzzling that this principle still stands and merits any sort of consideration as a valid treatment option. The mechanism proposed does not make sense physically. For example, a common cold is caused by a virus. We know this. Our immune systems are equipped to deal with viruses through white blood cells of varying kinds that can detect and label pathogens. Your immune system then makes a bunch of cells that can recognize that pathogen. Over a period of time, your cells work together to recognize, tag, then subsequently eat the viruses until it is no longer taking over your system and causing horrible runny noses or cloudy heads. Taking a dilution of onion is not going to do a thing. The chemicals in an onion have little to no effect on the efficiency of your immune system, especially when taken in such tiny, tiny amounts of actual chemical.

2. Dilutions are the key
Homeopathy often claims that diluting a chemical in such a large amount of water removes the “toxicity” of said chemical. Sure, if you dilute arsenic in such a low dilution that there’s only a few molecules per tens of millions of molecules of water, it’s not going to be toxic. But is it really doing anything at all at that point? That small amount of chemical is not going to elicit any lasting changes in your body. It may come in contact with a few cells, but overall, those cells probably aren’t going to change much; they need a certain amount of signal to get anything to happen.

I recognize that there is still research being done, and I appreciate it, but I think there needs to be more stringent methods of testing this. Many of the studies I’ve read in order to write this fail to have proper controls, and fail to keep conditions the same across conditions in many trials. I haven’t found any legitimate studies that show that homeopathy has a scientific, biological, viable mechanism of action. Supporters of homeopathy also point to the effectiveness of vaccines as an example. Vaccines are just really diluted viruses, right? That’s really just treating same with same, too. Sadly, it’s not. Vaccines are dead or disabled viruses that tell your immune system to build up the cells that recognize that virus so it can defeat it more readily the next time you may run into the evil little package of RNA (or DNA). Homeopathy has no real mechanism of action and won’t tell your immune system to do anything. It will probably be processed and filtered out with the solvent.

Another point many people bring up is that homeopathy has a great placebo effect. I agree. It has a great effect on the psychological well-being of many people who take it. If you believe it works, it will, to an extent. Or it just may change your perception of your condition and get you to think that you’re doing better than you are. Regardless, it’s not working the way you think it is. The brain has a wonderful way of changing our body’s efficiency in optimal psychological conditions (happy people are often sick less often than depressed people, etc), but it doesn’t mean homeopathy has any place in practical medicine.