The Mouthful: Lunch at Blackbird Bakery 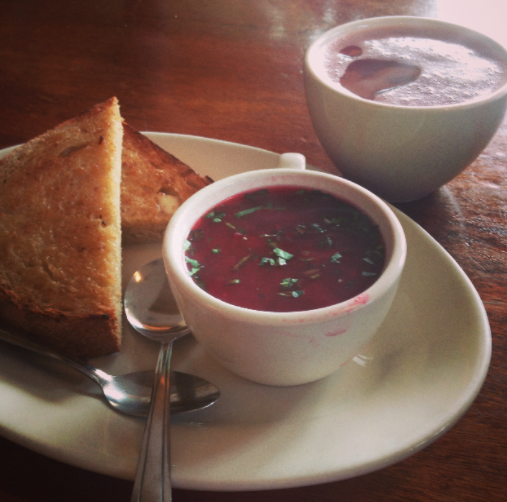 I had an existential crisis this weekend.

Because I realized that I’ve had my own food column for months now, and have never featured Blackbird Bakery.

Just a short walk from the Bainbridge Island ferry terminal, Blackbird Bakery is well-loved by islanders, but relatively unknown to the Seattleite set. I’ve converted all my mainlander friends to fanatical Blackbird Bakery appreciation, and it didn’t take much effort on my part – for one reason, and one reason alone.

Avert your eyes from the gorgeous cup of beet soup that’s stealing the spotlight up there, and take a look at that toast.

Toast, you ask? Yes, toast. Blackbird Bakery’s most acclaimed menu offering is their toast, browned and generously buttered with love. Their homemade oatmeal bread is standard, but they also offer a delicious vegan multigrain option. Let’s take a closer look, shall we? 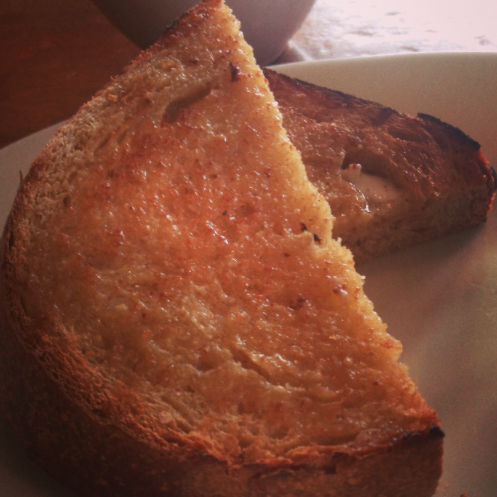 You can’t tell out there in cyberspace, but I am currently foaming at the mouth and clawing at the screen like a wild animal. I can’t possibly overstate it: this is the stuff of dreams. The stuff of legend. The stuff of weekly high school tradition, which we dubbed Toasty Tuesday. This is worth the price of a ferry ticket. I could write fifty blog posts rhapsodizing about this stuff and it would be insufficient. But I must move on for the sake of thorough reporting. 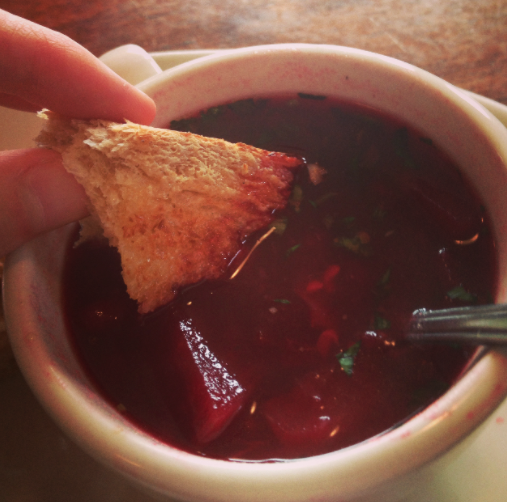 Beet soup is just one of their soup options. The other choice of the day was French lentil, and if you visit on a day when they’re offering Senegalese peanut, you will have stumbled upon greatness. All soups are vegan and come with a side of bread (or toast for 70 cents extra. I shouldn’t have to specify that you must spring for the toast).

I opted for a steaming cup of their winter elixir on the side – an inspired pairing with the soup, and nearly the same color. The winter elixir is an intoxicating combination of cranberry juice, apple cider, tea, and what tastes like about fifteen tons of fresh ginger. This stuff can clear your sinuses. 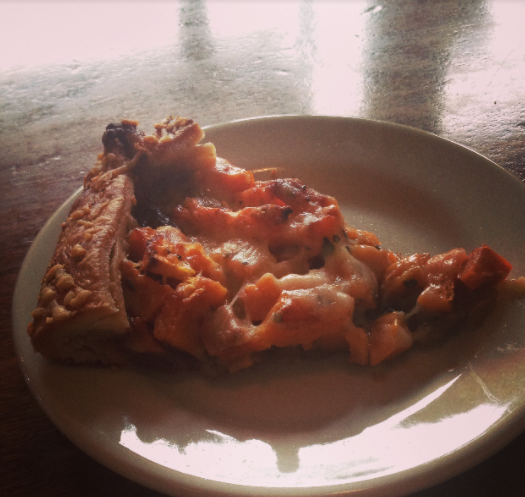 Blackbird also offers a daily selection of tarts, quiches, and flatbreads. The boyfriend opted for the French onion and butternut squash tart, and it took an inhuman amount of willpower to not wolf the whole thing down myself. 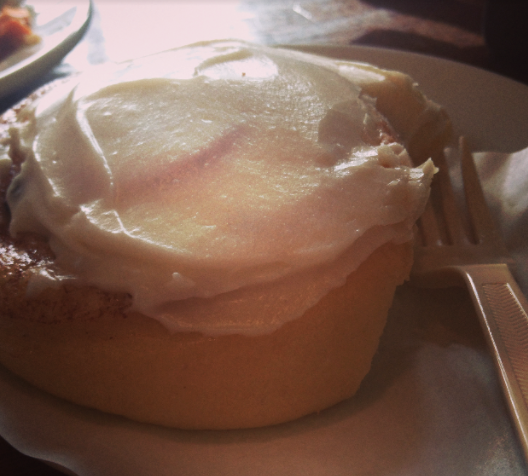 Finally, there’s the pastries. Blackbird offers a dizzyingly yummy selection of baked goods–the sugar-and-puff-pastry downtowners are a highlight, as is the buttery apricot oatmeal scone. But I have to admit, I took one for the team this time around, ordering perhaps the one disappointment on the menu: the brioche cinnamon roll. There’s just too low of a gooey-cinnamon-goodness-to-bready-roll ratio on this beast of a pastry – the cardinal sin of cinnamon-rollage, as far as I’m concerned. 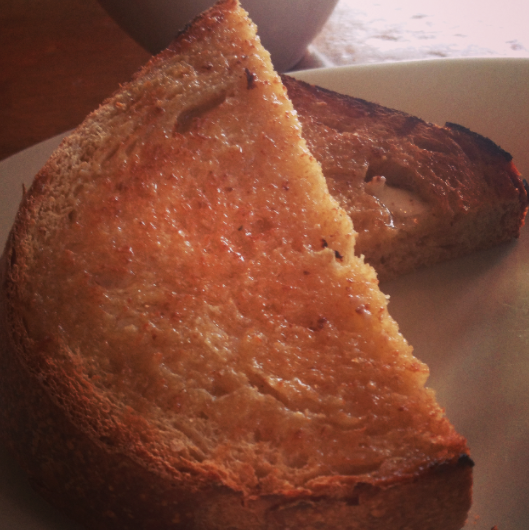 I can’t bear to end this review on a bad note, so here, have another picture of that toast.

I’m not emotionally stable enough to look at this picture. But I hope you enjoy it.