While the world’s best athletes continue to captivate the world at the Olympic Games, the person stealing the show is hardly a person at all–-it’s a Twitter account.

Even at Seattle University, fervor for the Olympics is mounting. Last week, The Spectator spoke with Olympic athlete Jessica Jerome. Unfortunately for the athletes, much of the public’s attention is currently being rerouted behind the scenes.

Since arriving in Sochi, several journalists have documented their disappointment with the apparently sub-par conditions in the area, lodging complaints against everything (though mainly the conditions of their hotel rooms and restrooms) on Twitter. One intrepid Canadian sports journalist took initiative and created a Twitter account, @SochiProblems, to archive all of these complaints. 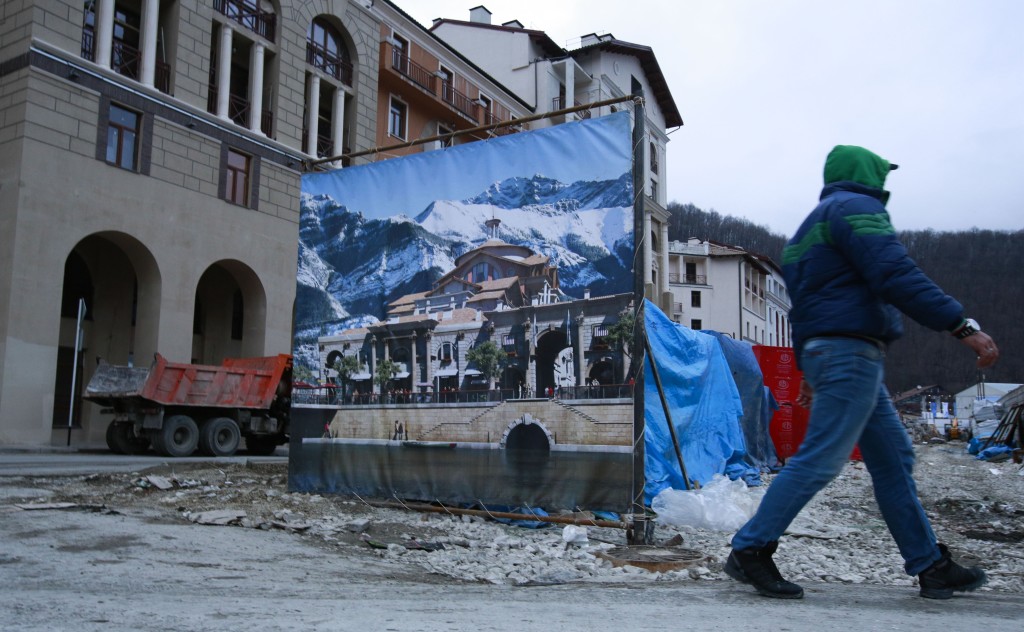 A worker enters a construction site behind a decorate fence next to accommodation for the Sochi 2014 Winter Olympics, Saturday, Feb. 1, 2014, in Krasnaya Polyana, Russia. According to the Sochi Olympic organizing committee, only six of the nine media hotels in the mountain area are fully operational. The accommodation for athletes, however, has not been affected by the problems. (AP Photo/Gero Breloer)

The account continues to inspire trending hashtags and is rapidly accumulating followers. In fact, since it was made just about one week ago, the account has gained over 342,000 followers.

That’s more than 100,000 more followers than the official Olympic Twitter handle, @Sochi2014, has.

The tweets started off as general complaints of the facilities in Russia, particularly for the journalists that would be covering the games. The first few complaints were of dirty water, wall-less bedrooms, noisy ongoing construction and complex toilets (apparently Russian toilets are difficult to operate). Some bathrooms didn’t have any walls separating the toilets either, which some more optimistic souls indicated would at least allow foreigners to collaborate in trying to figure out how to use them.

Other complaints involving the hotel rooms were broken doorknobs and light bulbs as well as no hot water or Internet. These have now escalated to include complaints of packs

of stray dogs outside of buildings and elevators getting stuck. In fact, some of them even come with the warning “Elevators are machines of increased danger!”

Many news outlets have reported that Russia spent more than $50 billion on the Olympic Games this year—which would make it the most expensive Olympic Games in history by far. According to Time Magazine, the last Winter Olympics in Vancouver cost $7 billion.

Several have questioned how Russia could spend so much in preparation for the games and be so under-prepared to host athletes and visitors. According to Sochi’s Olympic Organizing Committee, six of the nine hotels planned to host journalists are non-operational. Now, though, early reports are appearing in publications like the Washington Post suggesting that this $50 billion figure may be grossly inaccurate, while others still report that Russian President Vladimir Putin is launching an investigation into the spending over fears that more than $30 billion of the $50 billion price tag may have been embezzled by event producers and financiers.

Unfortunately for Putin and friends, whose generous spending was reportedly designed to cultivate an image that Russia is once again a formidable world power, attention has continued to be diverted away from the Games and onto Sochi’s perceived infrastructure problems even as the athletic events begin.
All the aforementioned complaints were lodged before the Games had actually begun.

During the opening ceremonies, there was a light display where five small circles expanded into the Olympic rings. When one of the rings failed to expand, dialogue quickly shifted to several memes and tweets poking fun at the technical difficulties.

As the week has progressed more complaints about the Olympic facilities continue to flood Twitter. These complaints include one journalist claiming that the locks to his hotel room were changed while he was gone, and others reporting being locked in their bathrooms.

At this rate, the world will know more about what went wrong than how many medals were won.