It’s always fun to see the Pacific Northwest end up on the national stage–be it for our (relatively) highly educated populace or for our forward thinking attitudes and policies on sustainability and the environment.

Unfortunately, the Emerald City (and surrounding areas) aren’t looking too great right now–largely because we are painting ourselves as short-sighted, contentious and unreasonable. The battle to hold Boeing in this state still smarts for some of us, particularly because in a lot of ways I think that it indicates a devolution of a much-needed sense of community within the state and reinforces an entirely unproductive attitude of self-preservation that will likely eventually come back to bite us.

However, I’m not here to talk about Boeing today. Rather, I am much more interested and alarmed in the ongoing “debate” over the $15 minimum wage effort. I’ve placed “debate” in quotes as a snarky way of hinting at the fact that–at least within Seattle–it doesn’t appear as though much of a debate is happening at all. 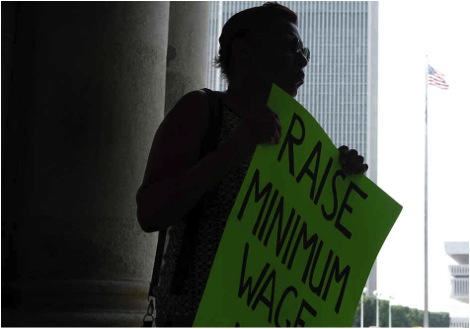 At Seattle’s recent inaugural event, every incoming council member expressed support for the $15 minimum wage effort within the city. Our elected leaders are not having a conversation about the merits or shortfalls (and believe me, there are shortfalls–we’ll get there) of the effort. Rather, they’ve realized that they can earn a much greater amount of political clout by fighting amongst one another to determine who was first supportive or who is most supportive of the wage increase.

This shouldn’t indicate to you that we’ve elected an amazing collection of forward-thinking or socially responsible leaders–the only thing it does suggest is that we’ve elected a group of very skilled politicians incredibly concerned about maintaining their seats by reaching out to young voters.

The city of Seattle and its citizens face several economic problems, particularly those who are young and/or have minority status. More and more, these people are being shoved out of the city as it continues to gentrify. Those who choose to remain within the city are losing purchasing power by the second–Seattle U students, the new trend of ‘micropodments’ on the Hill (or whatever you people are calling them now) is not a positive development… you’re being phased out.

There are a number of economic policy measures that can be taken to improve the current situation. Unfortunately, the most helpful among these are the most difficult and none of them appear to be on the table at this time.

A $15 minimum wage is easy to accomplish and it’s an incredibly sexy talking point. It’s also incredibly stupid and destructive. Economically speaking, one could argue that any minimum wage policy is a shortsighted mistake. Enforcing a minimum wage as high as $15 will not solve the economic problems of the people it appears designed to help. In fact, it’s very likely that it will end up hurting them.

There are several different schools of thoughts among economists on this point. The traditional view has always been in-line with supply and demand, as you increase the cost of labor employers will demand less of it in response–that the minimum wage and employment are strongly correlated, particularly among young people. Some economists now argue that this isn’t necessarily the case, and that employers could end up covering the cost for this labor in a number of different ways. They could, for instance respond by cutting back hours or benefits for these more expensive employees, or raising the prices of their products (neither of which sound particularly palatable), among other things…

Even economists like Arindrajit Dube who have long and loudly advocated that minimum wage policy does not contribute significantly to unemployment have admitted that a wage hike as steep as the one to $15/hour is very likely to sway corporations like McDonalds to substitute labor with automation.

Regardless of where you fall within the economic community on the issue, the outlook isn’t great here. Many economists around the nation have estimated that policies like this in Seattle could increase unemployment by approximately 5 or 6 percent.

It is also important to note that most studies that have been done on the effect of the minimum wage on unemployment were designed to analyze the effect of a small jump–no greater than a $1/hour increase. Even taking into account that Washington State’s minimum wage just jumped to $9.32/hour–we are talking about a startling 61 percent leap.

If you are a young person in the city right now, particularly someone without a lot of education (or if you care about the wellbeing of these people) you should be incredibly concerned right now because it’s looking more and more likely that they are either being forced out of the city either because they’ve been let go by cost-conscious employers or starved out by increased food prices.

This $15 minimum wage effort is perhaps the world’s worst band-aid solution. It doesn’t even begin to stop the bleeding–if anything it’s just widening the wounds.