Fantastic news from the world of Hardball Factor 360 this week…we made contact with the eponymous mother of our column and we’ve been shaking in anticipation of sharing the news with all of you.

Chris Matthews, longtime host of the popular MSNBC program “Hardball with Chris Matthews” somehow found himself speaking at Seattle University on Monday, Nov. 18 and I made sure to be there in hopes of soaking up any of the journalistic juju left in his wake. 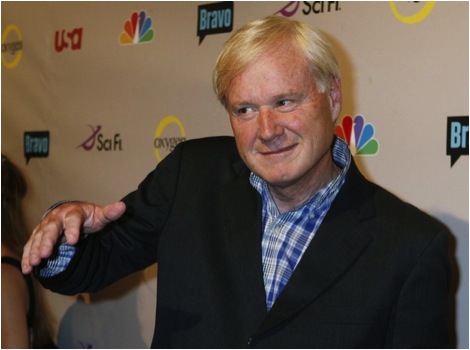 The man who inspired the name of this column, Chris Matthews AKA Mr. Hardball himself.

Before we dive into his talking points, I am delighted to share that as I walked by Matthews before his speaking engagement, we did make eye contact for a solid 2 seconds–he even went so far as to nod curtly in my direction. I don’t know about you, but I’m going to go ahead and take this as an express endorsement of my column. I’m still expecting a call to appear as a panelist on his show–which I’m sure is quickly forthcoming.

Matthews visited in conjunction with Town Hall Seattle, which brings several popular authors and speakers and global thought-thinkers to the city throughout the year. Demand for the event was so great that the organization reached out to Seattle University in hopes of utilizing their large ballroom to host the Matthew’s legion of fans. Several hundred–mostly senior citizens, soaked by a poorly planned Seattle downpour–turned up to hear him speak on his latest book “Tip and the Gipper: When Politics Worked”. The memoir offers a partial history of Matthew’s earlier years as a staffer to Tip O’Neill, who was speaker of the house during President Reagan’s time in office.

Matthews highlighted the extremely positive working relationship O’Neill had with the President, despite their overwhelming ideological differences. The event was especially appropriate given the political gridlock our system has been trapped in and continues to struggle with as President Obama continues to battle with House Republicans over… just about everything.

Matthews is an incredibly bright guy and an astoundingly gifted storyteller. His lecture for the night, while it did touch slightly on the contents of his book, was much less a sales pitch for the memoir and much more a running commentary on American politics past and present from one of the most gifted thinkers in the field.

He spoke at length on the legacy of JFK, the history of the two-party system, the current identity crisis facing the GOP, as well as (convincingly) pinpointing the sources of the strife we face as a collective society.

Given his adeptness at captivating a crowd and his mastery of the soundbyte, it’s a wonder that Matthews isn’t in office (quick research reveals he did give it a shot, but never quite found success).

In a way, though, one could easily argue that he does have an enormous amount of political potency as a prominent member of the 4th estate – perhaps even more power than he would as a traditional member of the current political system. Not to mention that his current gig probably pays much more than a Senate seat would.

Matthews, in his talk and the following Q&A, leapt deftly from topic to topic. I could write pages analyzing each of his talking points ad nauseum, but for your sake and my own, I’ve decided to just list a few of his more memorable/thought provoking thoughts of the night for your perusal (Matthews, in person, speaks much more quickly and with a more pronounced Philly accent than he does on his television show – so I am unfortunately unable to provide direct quotes on all of these). Enjoy!

Not every survivor of a disaster is a “hero”. Overuse of the word hero diminishes its power. We aren’t heroes – we’re victims.

America in the 20th century was an amazing nation doing amazing things. Going to war in Vietnam was a mistake – we took it too far. That said, we shouldn’t have let it stop our progress the way it did.

Matthew’s spoke much on Hillary Clinton and the 2016 presidential election (including an incredibly accurate impression of former President Bill Clinton… “Let’s do it again, Hillary!”). Matthew’s is clearly feeling a bit disillusioned with President Obama at the moment (as is much of the country) arguing that it feel’s more like the 7th year of a presidency than the 5th.

The biggest problem with American politics is the loss of civility. People of opposing parties used to at least treat one another with some semblance of respect and dignity. Nowadays, you have GOP representatives losing primaries because they once hugged President Obama and expressing that being in the same room with him makes them feel physically ill. Didn’t we stop playing cooties in elementary school?

Biggest fear for the future of America is how stupid/idiotic our society’s pop culture has become. He expressed disdain for the Clan Kardashian, but simultaneously found time to laud compliments on Jennifer Lawrence.

The leader of the Tea Party and director of much of American policy isn’t a Ted Cruz or a Sarah Palin or even a Koch brother … it’s the loud guy in the back of the room at a Town Hall in a small town shouting at his representative – this is the most powerful person in America.

There were, of course, many more fascinating ideas – but for brevity’s sake I’ll pause here. I do have a list full of gems, however, so expect a deeper analysis on some of these I haven’t included here in the future.

We managed to snag Mother Matthews – next goals: bring Father O’Reilly and Cousin Cooper into the mix. I can’t wait until we can all be one big happy family again.