For those few students who have classes in the Xavier basement, Oct. 31 was a long afternoon. What turned out to be a fault in the alarm system caused an evacuation of students and professors while the issue was resolved.

Recently alarms have been ringing on campus and many students wonder if there is a drill, a real fire, or just a persistent smoke alarm again. 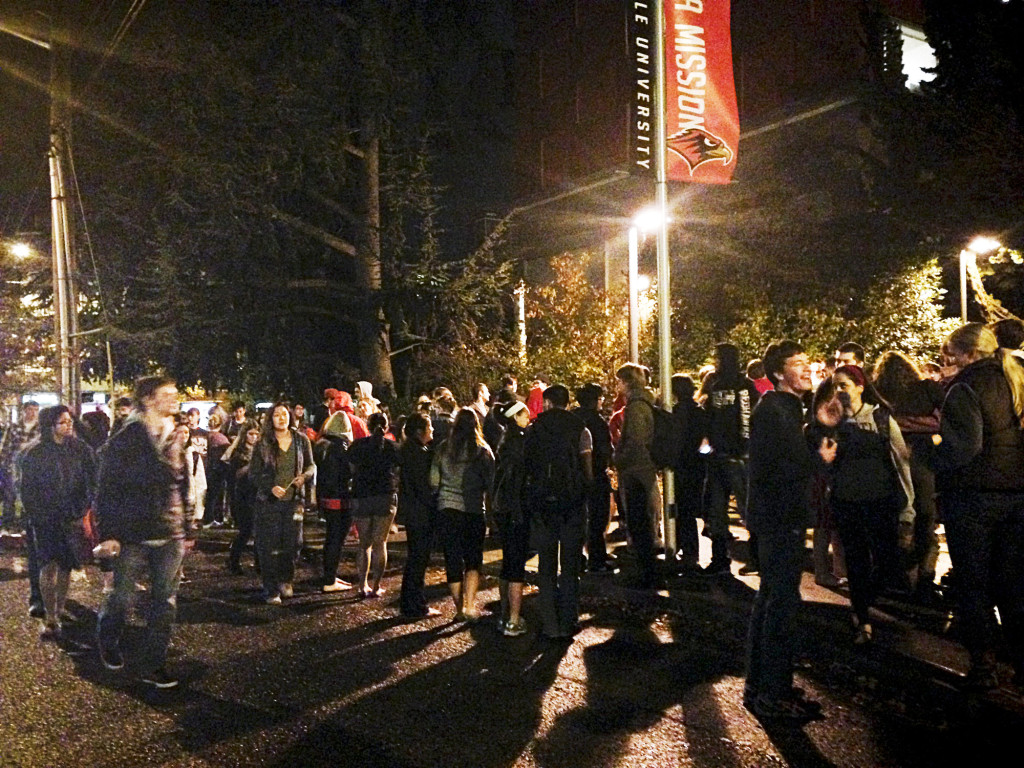 This was not the first time this year alarms have signaled something other than a fire. Earlier this quarter, building-wide alarms went off in the Douglas and the fire department was called to the scene. However, this alarm was due to a flood that triggered the alarm system.

Alarms can be triggered by accidents, drills and fires.

Students can at least be thankful that Seattle U does not often see prank alarms. But if someone is caught pulling an alarm without reason, the consequences can vary, according to the law and the Student Code of Conduct.

“That is a violation of the law if you do it as a prank,” said Associate Director of Housing and Residence Life Tim Albert. “So students would be potentially subject to legal action by the fire department. We have no say in that.”

The fire department has to take these calls seriously, especially given the nature of buildings on campus. The dorms are all high-occupancy/high-density buildings. In the case of a real fire, there is no charge for the fire department services; however, if prank alarms become an issue for the department they will issue fines to discourage the behavior.

Many false alarms are simple accidents that cause the smoke detectors to go off. This is often a result of cooking, in which case only the kitchen alarm goes off. In residence halls there are a lot of cases of burnt popcorn in the microwave. When this is the case, quite often the student comes forward and apologizes for the small mishap.

“There has rarely been major damage caused by accidental burnt popcorn,” Albert said. “Sometimes you might only ruin your microwave.”
Even with burnt popcorn the rooms need to be evacuated, thanks to smoke and other inhalation risks.

This year the U.S. Senate has even passed a resolution recognizing September as National Campus Fire Safety Month. Campus Firewatch reports that since 2005 162 people have died in fires in campus housing facilities.

One of the deadliest college fires in U.S. history was the “Boland Hall Fire” in South Orange, New Jersey. Three students died and 58 students and firefighters were injured in 2000 in Boland Hall at Seaton Hall University.

“Every building on this planet can have fires, and that includes ours.” Albert said.

There are easily accessible exits, alarmed doors, and areas of refuge for students with disabilities to ensure everyone can exit the building safely.

Residence halls on campus have taken many precautions against fires. Buildings contain sprinklers, smoke alarms, steel and concrete framework. These precautions can’t protect against everything, such as an object in a room catching fire and releasing harmful chemicals.

All furniture in residence halls that is provided to students are all built to resist fire; this doesn’t mean they won’t burn, but they won’t burn as easily and they wont give off as many gasses.

For fire drills, dates are set by Public Safety at a time they can anticipate buildings will have a high number of occupants; however, the alarms are not always prompt. If Public Safety is required to address matters elsewhere on campus, the drill can be postponed. For example, on Oct. 30 the Murphy Apartments’ fire drill was scheduled for 9 p.m., but it was delayed at least an hour due to an urgent call on campus. The drill was required to happen regardless because the date was picked and set by Public Safety.

“I know when we run drills the students don’t enjoy it,” Albert said. He has been in conversation with resident directors about orchestrating the drills like a study break. After the drill has been completed, students would be encouraged to go to the common rooms or lobby for snacks.