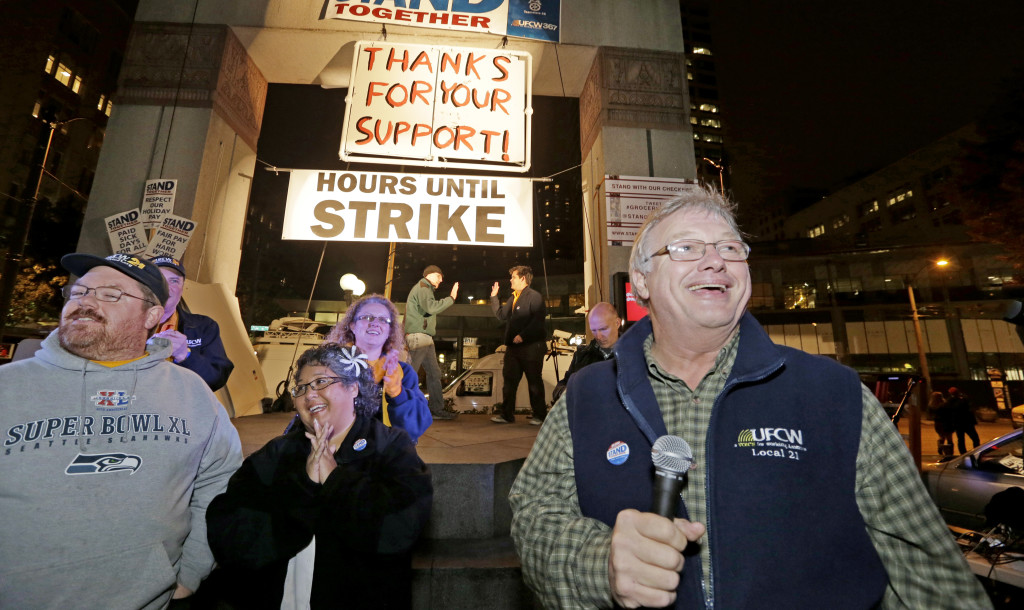 Prudent shoppers who stocked up on groceries last weekend in preparation for the potential grocery strike might have been disappointed when they found out store employees would not be going on strike after all.

Not for now, anyway. 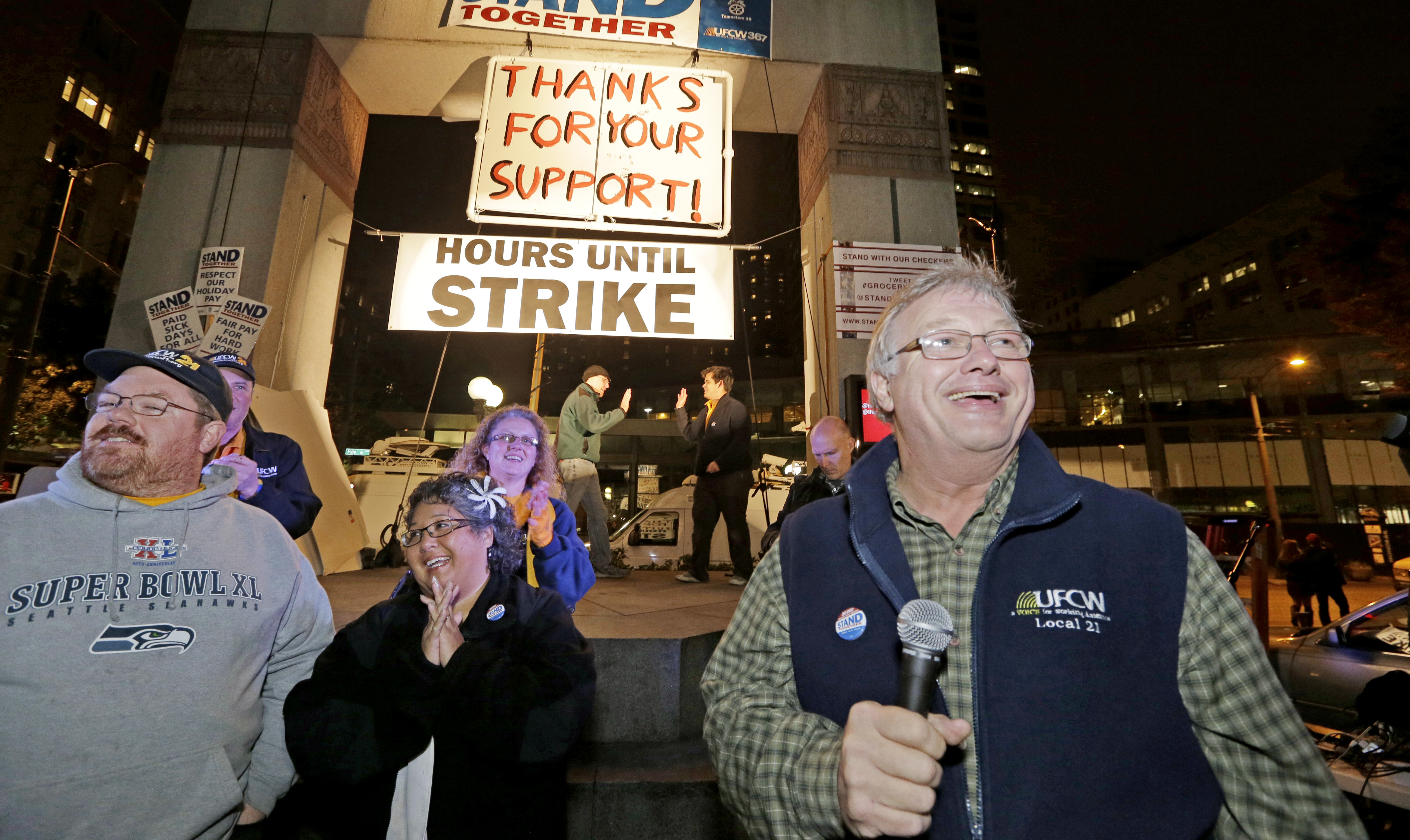 Grocery Store workers celebrate the tentative agreement reached on Monday, Oct. 21, in Westlake Center. Union workers had been set to walk out at 7 p.m. Monday if no agreement was reached.

On Monday, Oct. 21, employees at four major grocery chains prepared to walk off the job in protest against a new contract proposal that would cut hours and holiday pay, freeze wages, and limit health care benefits for employees. Some of these protesting companies – Albertsons, QFC, Safeway, and Fred Meyer – are major grocery stores frequented by Seattle University students.

The strike was brought on by failed negotiations between the United Food and Commercial Workers Union 21 (UFCW 21) and Allied Employers, who represent the major grocery chains. After proposing cuts to worker benefits, UFCW 21 representatives and employees began negotiating, but were not able to make progress. On Friday, the UFCW 21 gave the grocery store chains a 72-hour strike notice – if a deal could not be reached by 7 p.m. that evening all workers would walk off the job.

“We are pleased to announce that we have reached a tentative settlement agreement with the unions that continues to preserve good wages, secure pensions and access to quality, affordable health care for our employees,” said Scott Powers, Allied Employers vice president, as quoted by the Seattle P.I.

The strike would have affected over 21,000 workers in the Seattle area and presented a dilemma for local shoppers, who could either cross picket lines to shop at their regular stores or buy their groceries somewhere else.

According to Emily Gerardi, a Seattle Central Community College student who works part-time at the Capitol Hill Safeway, many customers were upset about the strike not because of how it would affect their shopping habits, but how it would affect employees.

“There are a lot of customers who come in every day and know the workers,” said Gerardi. “A lot of these people have been working at this Safeway for 10 to 20 years. They’re very dedicated workers. […]There was a sign outside advertising for staff workers in case there was a strike, and a lot of workers got really mad about that.”

Gerardi noticed some customers stocked up on groceries the weekend before the strike;sales were almost $2,000 higher that Sunday.

The tentative agreement reached Monday by the Allied Workers and the UFCW 21is not official until it receives voter approval. Details of the agreement will not be released until workers vote, which begins Tuesday, Oct. 29 and may take several days. If workers fail to support the negotiations, the UFCW 21 will again give 72-hour strike notice.

Customers might not realize the strain that the threat of striking puts on employees. Gerardi said that because all Safeway employees are required to be part of the union, they are required to participate in the strike – if they don’t, they will be fired after it ends. Although workers are compensated $200 a week by the UFCW 21 during picketing, this may not be enough for workers to live on.

“A lot of people who work full time had to find a new job because of what happened,” Gerardi said. “Quite a few people left and found new jobs because they were worried that if there was a strike they wouldn’t be able to work anymore. And some people got mad at Safeway and left – the entire Starbucks department quit before the strike.”

Some employees even spoke out about the impact that the overwhelming power of the companies can have on employee wages.

“The companies can afford to give us what we’re asking for. They just don’t want to do it,” said Vinod Goswami, a Ballard Fred Meyer employee, in an interview with the Seattle Times. “Every time we go to bargaining, our wages are going down, so we are going from the middle class to poor.”

If anything, the events have spread awareness of union impact.

“This made me realize more how much the union helps a lot of people,” Gerardi said. “These people work so hard to get us good benefits or help us keep our benefits. They do a lot more than people realize.”