Oh boy, do I love Halloween.

Scary movie marathon? Friends get excited about this. Dressing up as a killer/ghost/possessed person/monster? You actually get complimented. Getting scared at haunted houses? The best. Plus free candy? It can’t get much better than that. It’s the one time of the year creepy things and interests are praised.

But what I love most about Halloween is seeing all the Halloween costumes.

When I was a kid, I’d look forward to the car ride to Party City, spending forever going up and down the crowded aisle of costumes, waiting in the never-ending line to try it on, then walking out with the perfect one. But as I got older, I was inspired to get more creative with what I already had and investing money only on key pieces to an outfit. Trips to Party City became short walks to my mom’s closet, my sister’s wardrobe and digging out all the somewhat forgotten clothing I had. Then I’d buy the accessories or clothing I needed to complete the look.

Sure, store-bought costumes are great. But I love seeing the creativity put into costumes from people who either make their costume by hand or do what I have been doing for a while now, which is to put together a costume with things you already have. Doing this can feel more rewarding when you get complimented, it makes your look unique because no one can buy it at a store, it usually saves you some money and you get as creative as you want and really tailor the look to your liking.

What’s great is that it’s really not that hard at all to come up with a home-made costume.

Here are some tips to help you:

1. Decide what you want to be
This is important because this is probably one of the hardest decisions–at least, for me. I usually want to be everything for Halloween, and that can be hard because then I brainstorm every way to assemble every idea. But that’s not possible (unless you go to different events and dress up as different things each time which I did this year, woo–got most of my ideas out of my system).

Ask yourself these questions:

Figure out what you want to do, and commit to that. Everything that follows will be easy because you know what to focus on. 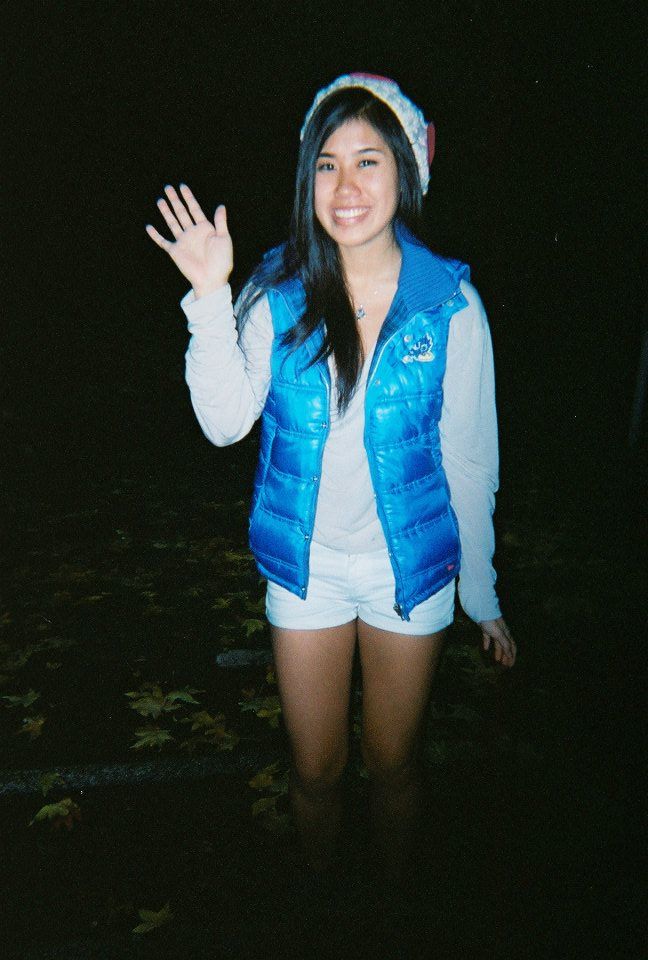 My friend Nicole Ng as Toad. All she did was pull out the key pieces that make Toad–mushroom hat, blue vest, white bottoms. Boom. Instant costume. She also is as cute as Toad.

Now the fun begins. Once you commit to a costume, figure out what the key pieces to an outfit are.

One year, my friends and I (there were five of us) decided to be the Mario Party characters: Mario, Luigi, Waluigi, Toad and Yoshi. For Mario, Luigi and Waluigi’s outfit, the key pieces are the hats, colored shirts and jumpers. We didn’t have jumpers–instead we substituted with jean shorts and attached suspenders. We also used tops in the same color but chose whatever style of top we wanted.

For Toad’s outfit, that friend didn’t even buy anything. She already had clothing to match Toad’s iconic wardrobe: mushroom hat, blue vest and white bottoms. She just taped on red circles to her beret to create the mushroom hat. Oh, and she also wore brown boots to match Toad’s brown footwear.

Yoshi also didn’t buy anything. That friend wore a white shirt with a green hoodie over it and green skinny jeans.

Remember, your clothing doesn’t have to be exactly as what you’re trying to replicate. It just needs to have the same effect.

3. Make what you can 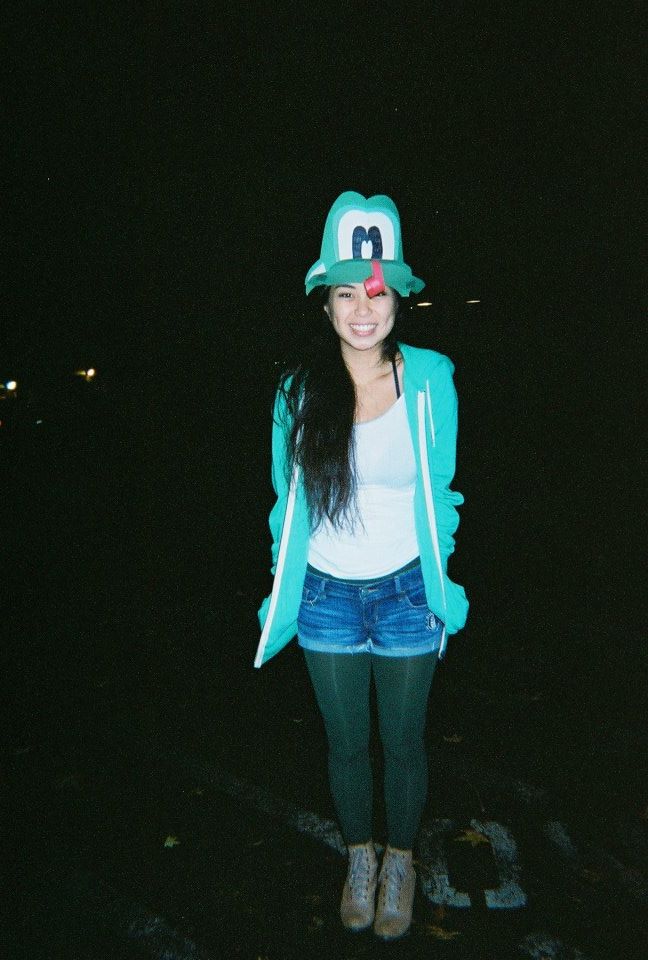 My friend Rachelle Tom as Yoshi. Yoshi is a tough character to replicate but she was creative and used her hat to make Yoshi’s face. Look how great (and cute) it turned out.

This is where the creativity kicks in. You may not have everything for a costume, but you might have what you need to make it.

The year my friends and I were Mario Party, the Yoshi costume was the most creative. My friend wasn’t sure how to use Yoshi’s face or even make the tail that Yoshi had, but she came up with an excellent plan. She took one of her trucker hats and used construction paper to create Yoshi’s face and tape it on. The brim acted as the mouth, where she also taped Yoshi’s tongue. She wore a green jacket and attached the tail to the bottom of that on the back for the tail. It looked really cool.

So look around your house for potential parts to a costume and figure out a way to make something work for you. It helps the blow to your wallet on spending money on things you probably won’t be using again. 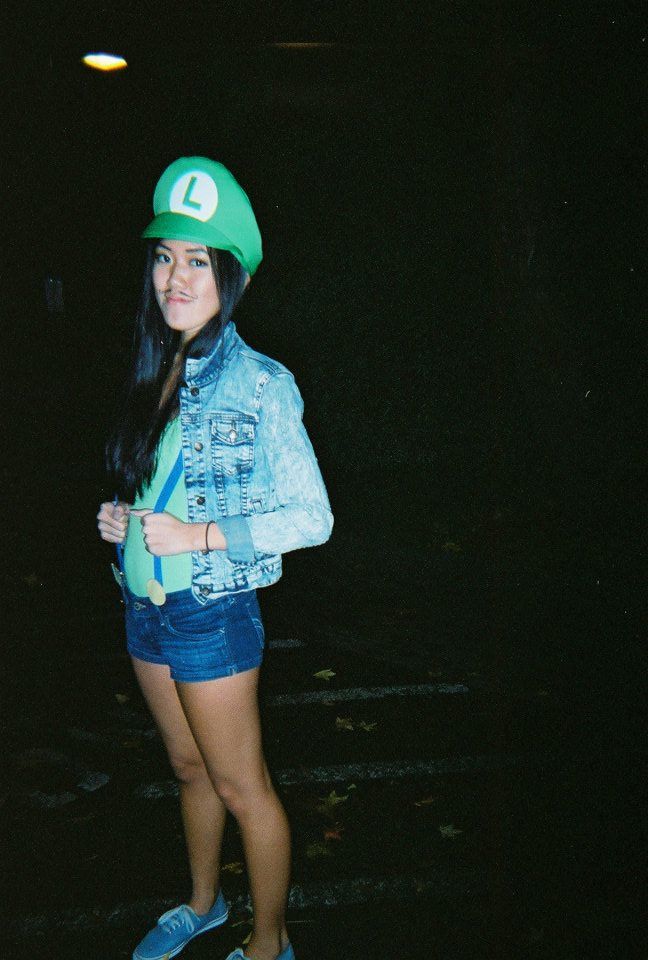 My friend Veronica Wong as Luigi. She bought the Mario Bros iconic hat to complete her costume, which made it easy for people to figure out that suspenders attached to jean shorts act as a jumper. She nailed the Luigi look in a cute style.

But sometimes, you have to resort to buying. If you have nothing to make pieces of your costume from, head to the store. But you don’t have to break the bank. Go to a thrift store to save some money. If you have some time to spare, shop online at Amazon to get some deals on accessories you need.

Save where you can, but splurge on the pieces that really pull your outfit together.

Bonus: Buying clothes from a thrift store is cheap and when you buy casual/everyday clothes, there’s a chance you can still make use of it after Halloween.

5. Give your look a twist 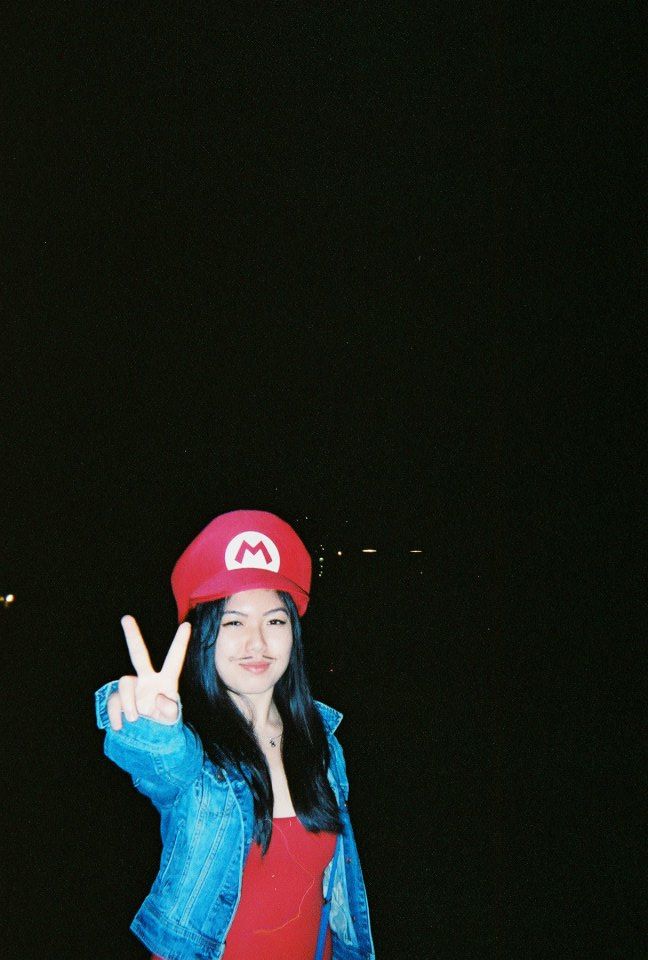 My friend Stacy Lu as Mario. She definitely softened up the Mario look, making it cuter.

As I mentioned, your look doesn’t have to be exact to the T. Give it more of an edge or soften it and make it cuter. Show everyone your style take on your costume. Just remember to keep the essence of what makes the costume.

+10 points if you take any costume and turn it into the undead version because I love zombies and the bloodier, the better. This is how the Mario Party rolled in to each place that Halloween night.

You don’t have to spend a lot of money to have fun on Halloween. My friends and I sure didn’t. And if you are wondering about the feedback we received that year, everywhere we went, people said, “Hey, look! It’s the Mario Party!” Yup. We totally ruled.

If you have photos of costumes you put together yourself, send them to
[email protected] and it could possibly be featured in my Friday column of my favorite costumes!