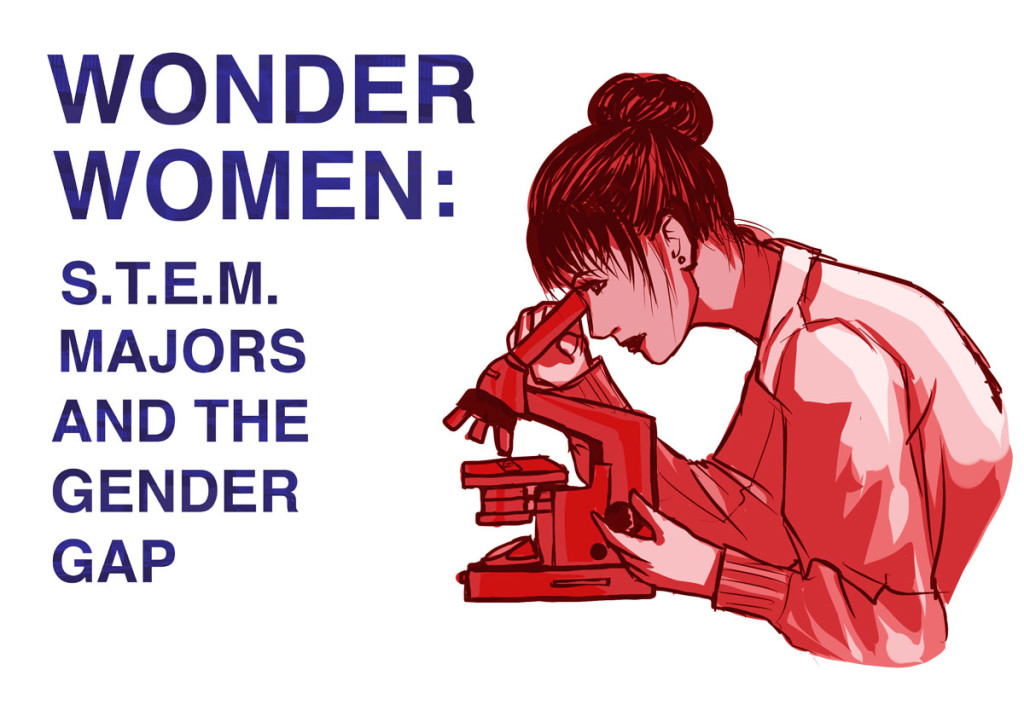 “‘Engineering.’ It’s almost a magic word,” said Beery. “People are really surprised to find out that I’m a woman in engineering.”

Granted, Beery admits, many people who ask knew her as a professional dancer, making the switch to engineering even more dramatic. But Beery is not the only female scientist to witness a shocking reaction when someone is surprised that a woman is studying engineering.

“Wow, you must be brave to go into a male-dominated field,” or “I would have expected you to study nursing or medicine,” are just a few of the reported responses that female engineering students regularly hear.

Science fields such as engineering, physics, math and computer science have a strong reputation for being male-dominated. However, many believe that opportunities in the fields for women have increased dramatically since the early days when physics departments were glorified good ol’ boy networks, only with more math. Unfortunately, the sense of contentment with the current opportunities for women is premature, and the fact that many people believe opportunities are finally equal for men and women may even be making it harder for women to get ahead.

The battle for equal rights between genders is not an aged issue. Gender equality is still very much at the forefront of activists’ minds. The Fair Pay Act, which mandates equal pay for men and women in equal positions, was signed only four years ago. It was the first bill signed by President Obama. The bill is named for Lilly Ledbetter, an Alabama woman who discovered that she was receiving less pay than her male counterparts as a supervisor at the Goodyear Tire Company and took her grievance all the way to the U.S. Supreme Court.

Despite the accomplishments of the Fair Pay Act, a recent study published by Yale offers striking evidence that women continue to be professionally discriminated against. In the study, identical resumés were sent to professors of biology, physics and chemistry seeking a student with a bachelor’s degree to fill a lab manager position.

The results of the study were startling.

According to a review of the study published in The New York Times Magazine, “No matter the respondent’s age, sex, area of specialization or level of seniority, John was rated an average of half a point higher than Jennifer in all areas except likeability, where Jennifer scored nearly half a point higher.”

These rankings were not, however, the most shocking results of the study. Even more significant were the following findings: John was offered an average starting salary of $30,238 to Jennifer’s $26,508. In addition, the bias was prevalent in both male and female professors, and even in biology research, a field that many say is more accepting of women than any other.

“For our students today, it’s not explicit discrimination because they have the same access to higher education, to learning and to the general belief that girls can do anything that boys can do,” said Jennifer Sorensen, director of general science and environmental science at Seattle U. “But what does persist is this subtle and pervasive perception of who does science or what does a scientist look like. This is something that we find influences girls’ perceptions of their self-efficacy as early as elementary and middle school, and that’s where we start to see self-discrimination, where girls are taking themselves out of the running for careers in science or even being open to science learning.”

In a recent spread in The New York Times Magazine, journalist and former Yale student Eileen Pollack revisited her alma mater to find out why things are not getting better for women in the sciences. Pollack graduated in 1978 as one of the first two women to receive a bachelor’s degree in physics from Yale University.

Pollack considered graduate school but declined to pursue a PhD because she was tired of the bias that she experienced during her undergraduate career. After being discouraged to study math by high school teachers, Pollack entered Yale sorely underprepared in comparison to her male peers, and dedicated four years to studying just to catch up.

This feeling of discouragement is not uncommon among young females studying the sciences. According to Meg Urry, the physics chairwoman at Yale featured in Pollack’s article, men tend to thrive without the encouragement that young women seek. The reasons for this difference is complex, probably resulting in part from the overwhelming cultural discouragement of women in the sciences. Regardless, when young women fail to receive encouragement or advice from mentors and professors, they might take it as a sign that they’re not talented enough
to succeed.

“Women need more positive reinforcement,” said Urry, as quoted in the New York Times article. “Men wildly overestimate their learning abilities. Women say, ‘Oh, I’m not good, I won’t earn much, whatever you want to give me is okay.’”
As further evidence that this phenomenon is the result of ubiquitous cultural bias, research shows that the prevalent discouragement of women to pursue the sciences is unique to the U.S.

“I grew up in Poland and we had more women in my engineering school … I was definitely more encouraged to do math and physics and that was what brought me to engineering,” said Agnieszka Miguel, chair of the Seattle U Electrical Engineering Department. “In some countries, becoming an engineer is seen as a way out of poverty. I think that’s why it’s a more respected position than here. Here everybody knows that engineers earn more money, but it’s maybe not that glamorous of a job.”

Miguel mentioned that she has experienced bias in her professional career. “I go to conferences and quite often you will have that feeling of you coming up to a group of men, and you are doing research at the same level as they do, but they get very uncomfortable.”

Beery had similar things to say about her experience with bias. She says that she has experienced more bias professionally than as a student, noting that at professional events and career fairs older men can be patronizing toward female students.

Beery and Miguel agreed that the cultural bias against women in the sciences starts at a young age, and thus the best way of changing the culture around women in the sciences is to intervene early. As an example of such action, every spring, Seattle U hosts an event called Expanding Your Horizons in which middle school girls are given the opportunity to experience science as something fun and exciting.

This event offers activities in which students learn that science can be interesting. In addition, Expanding Your Horizons offers young girls the opportunity to see women who are role models and successful in their science careers.

“Getting girls to understand that they can do technology at a young age will really help alleviate some of the discrepancy in gender,” Beery said. “For me personally, I didn’t think I could do math until I went to college. Some of those biases do end up affecting your own perception of your abilities.”

Here at Seattle U, faculty and students have positive things to say about encouragement given to women in the sciences. Sorensen said that Seattle U is not a cutthroat competitive environment like some research-based institutions and instead fosters an environment of collaboration and developing individual strengths.

Statistically, Seattle U is improving its representation of women in historically underrepresented fields. All three engineering department chairs are female and Sorensen believes that this sends a clear message to students about supporting both men and women in the sciences.

For young women who continue to struggle with whether or not they can succeed in male-dominated fields, Sorensen had this advice to offer:

“Find a champion, identify a faculty or staff member who is going to provide encouragement and opportunities; somebody who believes in them. Because if they’re not getting support from the general university culture, or support from their classmates, then we have to try to create that support a different way. It’s so important to identify what you’re passionate about, what you like to do, and look for opportunities to get in there and do it.”