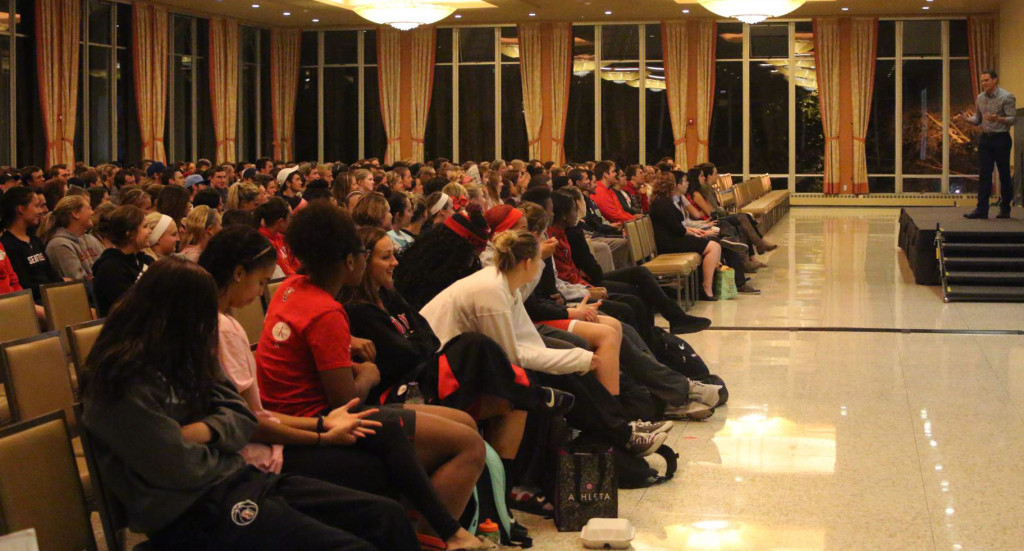 “I’m an athlete ally because the Olympics are for everyone.”

“I’m an athlete ally because sports know no orientation.”

These are the captions that accompany five pictures of various professional and Olympic spokespeople for a young nonprofit foundation called Athlete Ally. Established by a 26-year-old University of Maryland graduate, and former Division I All-American wrestler Hudson Taylor, this nonprofit pushes to eliminate sexism, homophobia and racism from sports and make all athletes comfortable.

In 2010 Taylor was a multi-time All-American wrestler with an interactive performance arts degree. Taylor was always passionate about civil rights and social issues. This passion led him to Athlete Ally and, last week, to Seattle University.

On Wednesday night, Seattle U’s Campion Ballroom filled with students and athletes poised to listen to Taylor’s story and learn more about his cause.

Taylor established Athlete Ally dedicated to making the world of athletics a more accepting and understanding arena—after graduating from college. This was a major leap for a man who had been raised intensely Catholic and whose great, great grandfather was a prominent missionary who brought Christianity to China. Taylor was a bit weary of how the public and former teammates would react to his new organization.

One step that helped Taylor start Athlete Ally was the human rights sticker he put on his headgear senior year.

Toward the end of the year, one of his coaches, who was closeted at the time, asked him to do an interview discussing the sticker. Taylor graciously accepted and asked that his email be included in the article to give kids an opportunity to speak to him directly. The response blew him away. The next morning he awoke to 2,000 emails from closeted kids across the country. This was the key catalyst that threw Taylor in the Athlete Ally arena. This is what pushed him to continue with the social work he has been doing.

Athlete Ally now has over 14,000 people who have joined the movement; 91 pro ambassadors and 33 Olympic ambassadors. Taylor tries to push as hard as humanly possible to spread his message of acceptance throughout the athletic world.
It is clear that Taylor’s presentation made an impact on the Seattle U audience—the crowd gave him a standing ovation and upperclassmen student athletes made positive comments about the speech.

Kevin Lynch, a senior on the men’s tennis team, explaine his interpretation of the message: “Be conscious of what you say and how you act. I grew up using those terms like it was nothing and when I finally got called out on it, it was a real eye opener.”

Jennifer Cruz, a sophomore rower, took away a similar message.

“Check your language. Change your outlook and how you see others,” said Cruz.
Both athletes believe that, if a homosexual teammate were to come out, it would make their teams closer. This is an outlook Taylor wishes to spread across the country.

In regard to his plans for Athlete All’s future, Taylor says the computer is the key.

“Online education is our next step. The biggest problem most nonprofits of this size run into is bandwidth—not enough people to keep up with the issue,” Taylor said. “In this case, if we push athletes around the country to sign the pledge we can gain a massive amount of support from other non-athletes. Another important aspect is training the trainer. That is, teaching the athletes to run workshops and speak out by themselves. Athletics is its own religion in many countries and we should use sports as a global vehicle for inclusion.”

Taylor responds to the prominent pro-gay statements from the Portland Trailblazers and Duke wrestler Dylan Ryan with an inspiring sentiment.

“It’s immensely important to have athletic institutions with cultural capital. Look at whom we are trying to get this message across to. Opinions of sports fans vary greatly. Anytime you have a large institution taking a stand on social issues like this, it makes everything more empowering, however this is one instance,” he said. “We need to keep moving forward.”