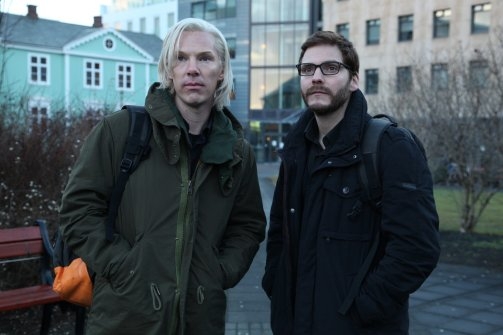 Once again, Hollywood has found a way to reduce a complex and serious historical moment—one still affecting those involved—to an artistically bland excuse for a thriller.

“The Fifth Estate” wants desperately to be the globetrotting equivalent of “The Social Network,” but fails in almost every regard.

The film follows the development of WikiLeaks as it moves from an obscure whistleblower site into an international force. It focuses on the relationship between Daniel Berg (Daniel Brühl) and Julian Assange (Benedict Cumberbatch) as the two men guide the site toward infamy, only to have their friendship crumble under the pressures of their influence on international politics.

From the very beginning, the film is confused about what kind of story it wants to tell. At times, it seems like the intention is to deconstruct Berg and Assange’s relationship, while at other moments, the focus shifts to the moral consequences of the site and the ethical implications of its vast data dumps. Unfortunately, no particular aspect of the film is done well and ultimately the story falls flat.

The film wants us to care about Berg and Assange’s friendship, but doesn’t do any of the narrative work to make either character very appealing. We’re supposed to empathize with Berg as the moral compass to Assange’s sometimes-deranged grandiosity, but there’s no attempt to reveal the real motivations behind his
character’s actions.

While Cumberbatch does a wonderful job with Assange, even his acting can’t fix the fact that the character’s motivations are never adequately explored. He isn’t much different than the man we’ve seen in the media: socially awkward, prone to dramatic speeches, unkempt and slightly lecherous. There are a few moments when director Bill Condon clumsily mentions Assange’s childhood experiences, but they are never explored and feel like an insincere attempt to invoke ethos in the audience.

Condon’s obsession with montages exacerbates this problem and the film constantly rips from location to location around the world. The effect is that the narrative constantly feels disjointed and rushed—we’re never around any of the characters long enough to really appreciate them.

Perhaps the best part of the movie is the set for the website’s submission platform—the filmmakers show a vast room full of desks, set in sand, where Assange and Berg monitor the website. While it’s appealing the first time it shows up on screen, it quickly starts to feel like a parody and by the end of the film the set has been used so much it loses any dramatic effect.

These issues speak to a larger problem about films like “The Fifth Estate.” Big-budget thrillers—“Zero Dark Thirty,” “Captain Phillips,” “The Green Zone”—that seek to simplify complex events into half-digested character dramas do a disservice both to the audience and the lives lost on account of these events.

Shouldn’t we wonder why no one has made a film about Chelsea Manning? Why, instead, do we get yet another half-glorification, half-critique of Assange? The film tells us the same story the media has—nothing less, nothing more—with a few technical flourishes designed to keep the audience lightly amused.

Do yourself a favor: if you want to know about WikiLeaks, do the research yourself and skip “The Fifth Estate.”