Should coaches be making this much money? 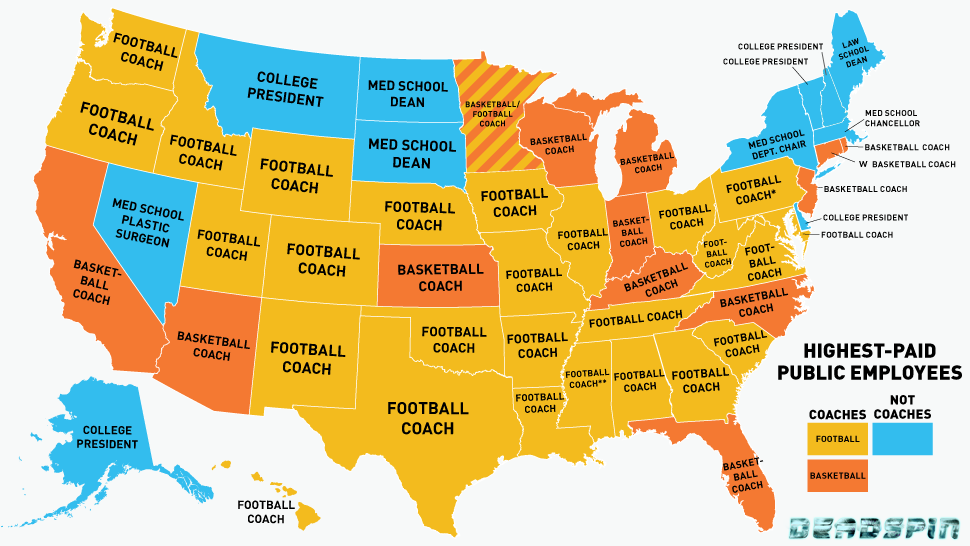 A quick look at this map shows just how profitable college sports have become. In most states, coaches make the most of any public employee.

Which public official in your state has the highest earnings?

When it comes to the education system, your first guess might be the school president or the dean of a college. The reality? Unless you live in one of the Dakotas, it’s probably a football coach.

Deadpsin, a website dedicated to sports news, released an infographic back in May that shows the distribution of public employee earnings around the country. Across the board, the majority of states have coaches—usually football or basketball—as the highest paid employees.

It’s no secret—particularly around this time of year—that sports are a massive industry in the United States. In Washington, the revenue for ticket sales alone for 2012 was over 20 million. Considering the role that college teams play in the eventual development of valued players—whose salaries will rank in the millions as well—it’s perhaps not too surprising college coaches earn a pretty penny.

But should coaches really make more than the heads of their universities? University of Alabama coach Nick Saban has a contract for $5.62 million dollars (which will be at six million by 2017). To put that in perspective: in 2012, E. Gordon Gee of Ohio State University had the highest earnings of any public school president. He received $2 million in compensation.

The reality is that college sports have become a massive profit-producing industry, and in any Capitalistic society that kind of demand is bound to produce a lot of profit. But the massive gulf between coaches’ earnings and those of the other employees at the university speaks to a larger debate currently surrounding college sports. Namely, is the industry itself beginning to overshadow the supposed purpose of a college university: to educate students?

The numbers also may be a bit unnerving because so much of the industry is built on the backs of players who, aside from not being reimbursed financially for their role in creating revenue (excluding scholarships), usually receive injuries that will effect them for the rest of their lives. Furthermore, many of those athletes don’t make it into the NFL or the NBA, so they spend four years of their lives producing huge profits for the institution and receiving very little reimbursement for their efforts.

Most of these revenues don’t actually make it to the schools, either. Because the industry has become so massive, most athletics programs operate separately from the university hierarchy, maintaining a kind of business relationship with their schools. According to the Deadspin article, which takes its information from revenue data from 2011-12:

“Athletic departments at 99 major schools lost an average of $5 million once you take out revenue generated from ‘student fees’ and ‘university subsidies.’ If you take out ‘contributions and donations’—some of which might have gone to the universities had they not been lavished on the athletic departments—this drops to an average loss of $17 million, with just one school (Army) in the black.”

There’s no doubt that college athletics are important, and the industry is too large for coaches—who are undoubtedly an integral part of a school’s athletic success—to not receive a good chunk of the profits. But the goal of a college university should be first and foremost the education of its students, and when college sports become so commercialized that they wield a disproportionate amount of power over the school, something has to change.