Inside Llewyn Davis
Joel and Ethan Coen’s newest film “Inside Llewyn Davis” is already making some serious critical waves. In May, the film premiered at the Cannes Film Festival to rave reviews and immediate Oscar buzz. Set in 1961 Greenwich Village, the film follows a week in the life of folk singer Llewyn Davis (Oscar Isaac) as folk music undergoes a dramatic transition and comes into its own.

The film is likely to be nominated for Best Picture, following in the footsteps of Coen heavyweights “Fargo,” “No Country for Old Men,” “A Serious Man” and “True Grit.” At the very least, the film could merit an acting nod for Isaac and snag Best Director or Best Original Screenplay nominations.

“American Hustle” is based on the Federal Bureau of Investigation’s sting operation called Abscam, which ultimately led to the conviction of more than nine U.S. government officials.

Like “Silver Linings,” Russell’s “American Hustle” is genre-less and stars a knock-out cast that also includes Christian Bale, two-time Oscar-nominee Amy Adams and Jeremy Renner, another Oscar-nominated actor. The film is sure to earn some acting nominations and, perhaps, make a go for Best Picture.

12 Years a Slave
By the director of “Shame” and “Hunger,” “12 Years a Slave” is the most talked about film of 2013 thus far. Steve McQueen’s historical drama premiered at the Telluride Film Festival in August and wowed critics almost across the board.

The film recounts the autobiography of Solomon Northup, a free black man who, in 1841, was lured out of New York state and sold into slavery in Louisiana, where he worked on plantations for 12 years before he saw freedom once more.

Although the film has already been accused of historical inaccuracy, others suggest the film is a shoe-in for a Best Picture nomination because—like “Schindler’s List” for example—it serves as an important historical document and could easily have empathetic Academy members on its side.

And, as we all know, the Oscars are really a reward given to the best-marketed film of the year, not the film that is artistically and cinematically of the highest quality. Fox Searchlight has chose “12 Years a Slave” as its Oscar baby and, so far, it looks like their ability to shamelessly market the film is winning out.

August: Osage County
Based on the play by Tracy Letts, “August: Osage County” tells the story of a large dysfunctional family living outside Pawhuska, Oklahoma. Not unlike 2011 favorite “The Descendants” in its themes, the film is co-produced by “Descendants” star George Clooney, putting the film in a place vaguely reminiscent of last year’s Best Picture-winner “Argo.”

As of now, “August” looks like it will be stacking up the acting nominations come January—the film stars a number of powerhouse actors including Oscar-winners Meryl Streep, Julia Roberts and Chris Cooper as well as nominee Juliette Lewis and Ewan McGregor. 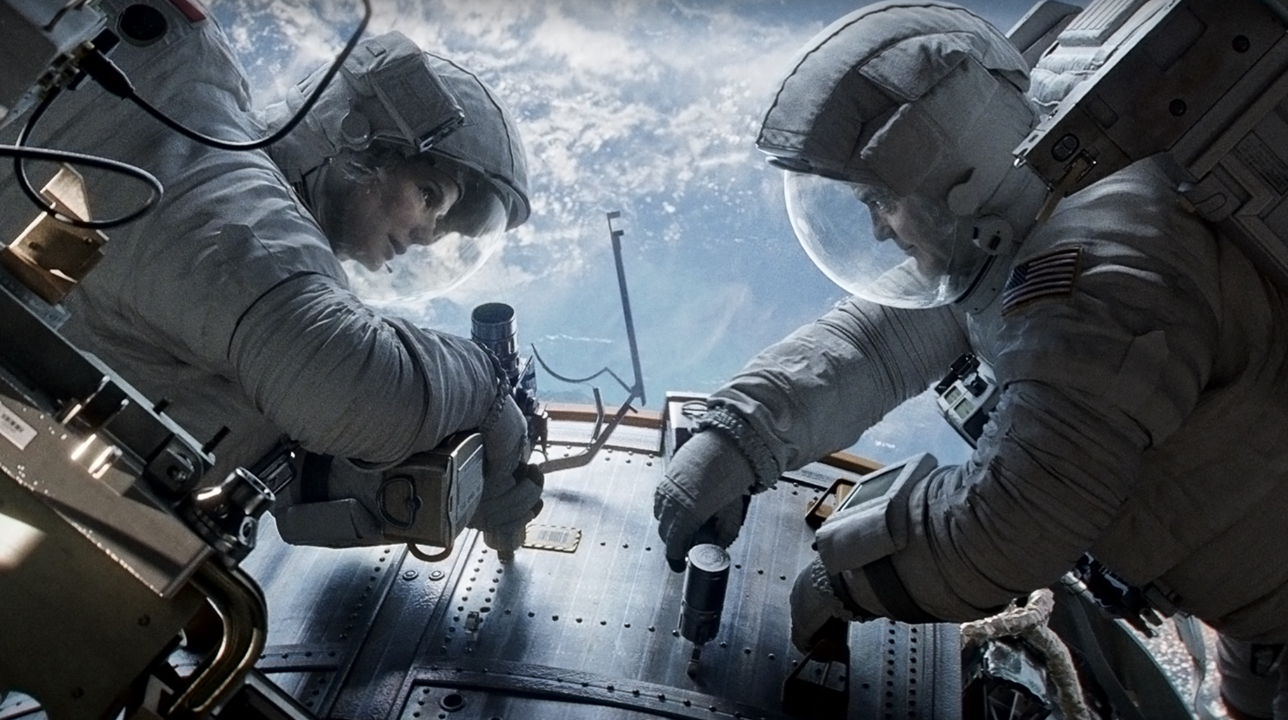 From “Gravity”. Courtesy of Warner Bros.

Alfonso Cuarón’s “Gravity” could easily take home the Visual Effects Oscar this year. Centering itself on two astronauts left floating in space after their ship is destroyed by space debris, the film’s success is entirely dependent on its VFX—and so far, critics are more than impressed. Like “Life of Pi,” “Gravity” could also win Best Picture and directing nods from the Academy simply because of the scope of its visual effects work.

Starring Sandra Bullock and George Clooney, the film is likely to earn some acting nominations as well. Already, critics are claiming that Bullock will be a shoe-in for Best Actress, although her competition could be stiff with Kate Winslet, Cate Blanchett and Julia Roberts taking up potentially Oscar-worthy roles this year as well.

Prisoners
Just coming off of “Les Miserables” buzz, Hugh Jackman could be up for another Best Actor nomination—and maybe even a win—this year. Critics are calling his performance in “Prisoners”—a film about two sets of parents whose daughters are kidnapped—the best of his career.

As for the thriller overall, Variety called it “an awards season heavyweight” right off the back and it struck gold at the box office. Content wise, “Prisoners” certainly strikes a sensitive and relevant chord with the Ariel Castro case and recent suicide occurring just this summer—as learned from films like “The Social Network” and “The Hurt Locker,” social relevance often merits Academy recognition.

Labor Day
Kate Winslet will grace the silver screen this year for the first time since her Oscar-winning role in “The Reader” and she already has critics abuzz. Of course, almost every film that Winslet touches ends up being Oscar material.

Winslet will star in “Labor Day,” which tells the story of a depressed single mother and her son who give a scary, wounded man (Josh Brolin) a ride and, as they learn more about his troubling past, find themselves with limited options—unbeknownst to them, the police search town for the escaped conflict.

The film is directed by Jason Reitman (“Juno” and “Up in the Air”), so a Best Director nomination is also a serious possibility for “Labor Day.”

Nebraska
Director Alexander Payne (“The Descendants, “Sideways,” “About Schmidt”) is back this year with potential Oscar contender “Nebraska,” which received great success at both Cannes and Telluride earlier this year.

The film follows an aged patriarch who, along with his estranged son, travels to Lincoln, Nebraska to retrieve $1 million the man believes he’s owed. Although the film is one that some critics feel Payne has done before—a road movie concerned with familial tension—the film is earning high praise for its cast and general charm. Star Bruce Dern is already an Oscar favorite and former “Saturday Night Live” cast member Will Forte has made a stir as well. Like last year’s “Amour,” “Nebraska” is likely to hit home with people who have aging parents or are personally dealing with the pain of senility.

Philomena
After watching “Philomena,” Time Magazine titled its review of the film “Reserve an Oscar for Judi Dench”—needless to say, Stephen Frears’ newest film is one to see.

The film, which is based on a true story, centers itself around Philomena Lee as she searches for a son taken from her earlier in life by Northern Irish running a slave labor home for unwed pregnant girls.

Despite the sad and disturbing nature of its premise, Frears’ film, like “The Queen” starring Helen Mirren, is said to strike a balance between the comedic and the dramatic, and the result is a feel-good road movie that was widely beloved by Venice Film Festival audiences.

The film, which stars Tom Hanks and Emma Thompson—neither of which are strangers to the Academy—takes us behind-the-scenes tale of Disney’s 1964 film “Mary Poppins” and focuses specifically on novelist P.L. Travers’ two-week briefing with Walt Disney during which Disney attempts to obtain the screen rights to her highly personal novel. As “Mary Poppins” was Disney’s first major Oscar-winning film, it seems almost too sweet that a film in honor of the milestone could be nominated as well.

An indie pick-up, the film is directed by John Lee Hancock of “The Blind Side” and Disney is gearing up to make “Saving Mr. Banks” its Oscar baby in light of a surprising loss with last year’s “Lincoln.”

Other films to look out for include “The Wolf of Wall Street,” “Foxcatcher,” “Her,” “Fruitvale Station,” “Before Midnight,” “All is Lost,” and “Ain’t Them Bodies Saints.”