Balls Out: Déjà Vu of Races 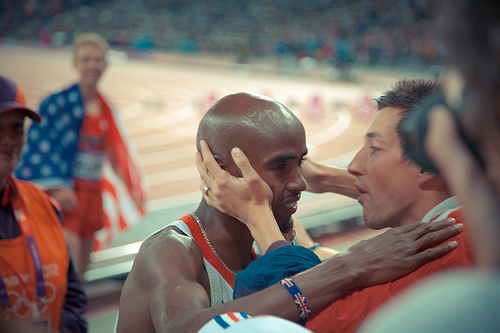 Back in 1997, a squabble arose amongst some of the world’s fastest men. What can you expect from two highly accomplished, testosterone-filled Olympic sprinters? Traditionally, the title assigned by the masses of “World’s Fastest Man” goes to the Olympic gold medalist of the 100-meter in the dash. In ’96, the title was given to Canadian Donovan Bailey. However, Michael Johnson of the U.S. was victorious in the both the 200 and 400 meter dash.

In his commentary of the ’96 event, Bob Costas was a proponent of Johnson receiving more credit. Costas showed the world that Johnson’s 200 meter in comparison to Bailey’s 100 meter was .18 seconds faster when divided by two. This sparked resentment in Bailey, which led to a challenge.

Bailey challenged Johnson to a race. However, due to their varying events, the distance was compromised upon at 150 meters. The race ultimately only resulted in Johnson straining his quadriceps and Bailey walked away with $1.5 million.

Bringing this back to relevance today, revered Usain Bolt has been challenged by long distance guru Mo Farah. Bolt is a multiple world record holder and Farah is the most recent 10,000-meter Olympic gold medalist. Both have accomplishments that drag on for far too long, and would most likely only make any reader of this column incredibly insecure of their own physical endeavors.

Farah challenged Bolt back in July to a 1500-meter race that would reap money for charity. His original idea consisted of votes from the public on the distance, and donations towards a charity chosen for the winner. Bolt quickly dismissed the idea of a 1500-meter, claiming that such a distance would be much too far. He made a new suggestion: 600-meter, a distance he had completed before in his training.

Although the two athletes share an agent and are allegedly good friends outside of sporting, the whole scenario is quite peculiar from the eyes of a distance runner such as myself. I was initially suspicious of Farah’s challenge being only for fun and charity (as opposed to some sort of macho, prove-something statement) due to his choice in distance. Once a race extends outside of the 400 meter, it becomes much more based upon aerobics. Farah is well aware that sprinting consists almost purely of foot speed, and therefore he would most likely crush Bolt.

Such a suggestion leads me to believe that, although this would be a very effective mode of fundraising, this race is Farah’s idea of getting distance running more into the spotlight. The way in which people are utterly in awe of Bolt, yet don’t have the patience to recognize that Farah can run 3.1 miles maintaining a roughly four minute and roughly 25 second mile pace is one of the most frustrating aspects of being a distance runner.

The idea, if Farah executes it properly, would result in people’s revelation that those distance Olympians, who merely run in circles for far too many laps to keep track of, are truly phenomenal beings (one might even call their athleticism out of this world.)
I wish best of luck to both runners in the show down, regardless of the motive. It will be a thrilling affair no matter what outcome.