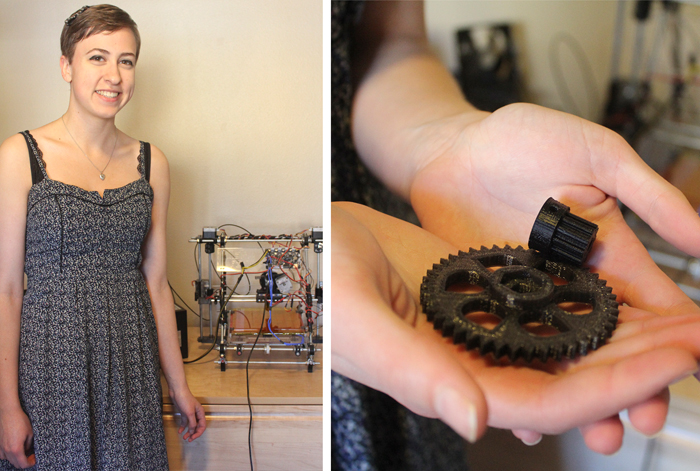 Turns out a 3-D printer has the potential to feed you and save your life.

New 3-D printers can make a solid object of basically any shape from a digital model. A 3-D printer prints a material through sequential layering to manufacture whatever it is the virtual blueprint instructs. This manufacturing technique is inventive because there is less waste, more efficiency, and it is more precise.

“It sort of has a variety of levels it exists at,” said Marie Pahlmeyer, a sophomore mechanical engineer and 3-D printer hobbyist. “You have the really expensive corporate printers that can cost tens of thousands of dollars, and then you have the hobby level stuff which I’m involved in, which will cost a thousands dollars or so to build one.”
This method of 3-D printing has been around since the early ‘80s, but recently technology has introduced new materials that can be used in 3-D printing beyond the traditional plastic.

“People also print with ceramics, metals, and stuff like chocolate,” Pahlmeyer said. “Chocolate is a popular one.”
Someone has even used a wood substrate to print with, and with extra coding to vary temperatures there is a wood appearance in the printed object, said Pahlmeyer.

For 6-week-old Kabia Gionfriddo, 3-D printing became a saving grace. Gionfriddo had been experiencing breathing problems to the point where his parents were performing CPR every day, reports CNN.

Turns out the young boy had a rare obstruction in his lungs called bronchial malacia. It was assumed that Gionfriddo would never leave the hospital, but doctors performed a “never been tried on a human” procedure, and created a splint to make a path through his blocked airway.

This splint was created on a three-dimensional printer.

This procedure had been used on animals, but doctors received emergency clearance from the hospital and Food and Drug Administration to try this method on Gionfriddo. The splint was created to fit the child’s exact dimensions, and CT scans helped to work the computer-generated model of the splint. The blueprint then went to the printer and created the life saving apparatus for the boy. At 18 months old, Gionfriddo is doing well and still able to breathe on his own.

Beyond medical miracles, 3-D printing is out of this world. Quite literally.

NASA has recently spent $125,000 to fund a 3-D pizza-printing prototype for astronauts. There are plans for the printer to make other foods, but pizza will be the first.

Anjan Contractor, the mechanical engineer and pioneer of this idea explained in his NASA proposal: “It works by first ‘printing’ a layer of dough, which is baked at the same time it’s printed, by a heated plate at the bottom of the printer. Then it lays down a tomato base, which is also stored in a powdered form, and then mixed with water and oil. Finally, the pizza is topped with the delicious-sounding ‘protein layer,’ which could come from any source, including animals, milk or plants.”

These canisters of condensed materials for the pizza can be kept in controlled environments and essentially never spoil. This proposal is looking at the distant missions, like Mars, where resupply will be difficult. The printer will allow for the food products to be stored in bulk, minimally processed, and preserved for a longer period of time than traditional space foods. Plus, the printer will reduce food prep time for the astronauts. “You can already print with sugar really easily,” said Pahlmeyer. “Really elaborate cake toppers can happen out of these printers.”

Contractor proposes his printer could help in US military missions and even be used on Earth in the future when the current infrastructure of food production and supply will not be able to meet the demand of the population. It looks like in the future, to avoid food shortage and famine, people will be eating out of printers frequently.

One of the conflicts among 3-D printers currently is the desire for open source coding. There is also the eventual desire for 3-D printers to become as common as a regular printer. This means there needs to be moves for affordability and making the printers compact. A few companies have even released 3-D files for at home printing of plastic parts on their products for easy replacement done at home.