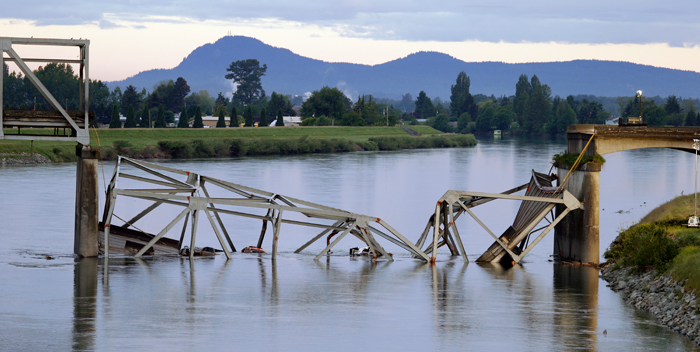 The accident caused two vehicles to fall from the bridge into the river below. Several victims were hospitalized, but the accident resulted in no fatalities.

The cost of repairing the damage, however, is dramatic.

It will amount to about $15 million, according to an estimate by Washington Governor Jay Inslee.

According to a recent report by the Skagit Valley Herald, the federal government will pay for temporary repairs, as well as 91 percent of the cost of repairs this fall.

“We have some work to do on our bridges whether or not this accident happened, and we have some discussions in Olympia about making sure that we make investments in bridges to prevent this kind of thing from happening,” Inslee told reporters.

In addition to the cost of repairs, Inslee said, the closure also has the potential to damage the Skagit Valley area’s economy.

Many of the vehicles that cross the Skagit River Bridge on a daily basis are trucks carrying goods to British Columbia. These items include computer parts, vehicles and raw materials such as wood, iron and steel.

The temporary closure will call attention to the major role that the Skagit River Bridge plays in both the local economy and national trade.

According to the Bellingham Herald, about 71,000 vehicles crossed the bridge on a daily basis prior to the accident. The new detour in traffic will cause both delays and congestion for drivers, as well as possible price increases of consumer goods due to increased costs of transportation.

Of the 71,000 vehicles crossing the bridge, an estimated 8,400 are trucks carrying fish, aircraft components and finished goods from British Columbia.

In addition to the severe impact on local neighborhoods and international trade, the Skagit Bridge Collapse also has the potential to affect Seattle University students who drive to campus from Bellingham or other cities north of the Skagit Bridge.

Investigators are still trying to figure out exactly what caused the collapse. So far, investigators know that the truck that hit the bridge was carrying an oversized load when it collided with an overhead tress.

The National Transportation Safety Board (NTSB) is reviewing state records, but the bridge appears to have met the standard structural requirements. This is worrisome, and becomes even more pressing considering that seven other highway bridges have similar risks to the Skagit Bridge. According to the Seattle Times, these seven bridges are all “fracture critical.”

In other words, they consist of low clearances that, if struck by a load, could collapse upon the breaking of a single beam. Oversized trucks are not unusual in Washington state, which leads investigators to believe that it’s not unlikely that such an accident could happen again on any of Washington’s lower clearance bridges.

According to Dr. Jhon Smith, a civil engineering professor at Seattle U, the bridge collapse represents an unfortunate accident, but shouldn’t be cause for panic about the safety of Washington’s bridges.

“Washington is pretty good in terms of transportation compared to other states, so I’m not questioning whether Washington is less safe now just because this happened. I think this was just a discrete and an unfortunate event,” he said.

As far as preventing such accidents in the future, Smith suggested that better regulation of oversized vehicles, rather than better engineering, is necessary. According to Smith, the bridge was doing its job and that should not have included accommodating an oversized truck.

“When the trucks are really big, they’ll even give them some prescription to drive right through the middle of the bridge, not towards the ends where the arch and the overhead is less,” Smith said. “Maybe it would have been prevented if he was driving more in the middle, but that is all speculation at this point. There was probably some human error in any case.”