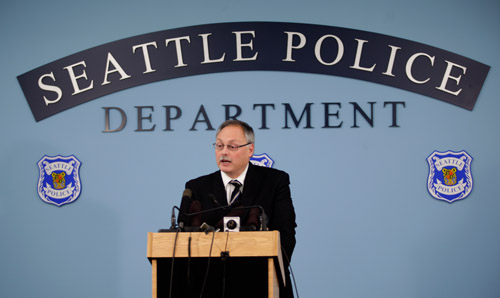 The Seattle Police Department has recently gained a reputation for excessive violence and mishandling
of issues.

Diaz’s sudden decision has resulted in speculation throughout Seattle, with some saying that Diaz was asked to step down by Mayor Mike McGinn. These accusations, according to the Police Department, are entirely false. Diaz’s choice to retire certainly comes as a shock to the community, and it brings the opportunity to reflect on Diaz’s achievements and acknowledge the future reform that needs to be addressed.

Diaz made history when he became Seattle’s first minority police chief in 2009. At the time, the department was under scrutiny for several cases involving officers and minority citizens, and the choice to appoint Diaz signaled a new direction for Seattle’s police department.

During his time as chief, Diaz made several notable accomplishments, which he listed at a recent news conference covered by the Seattle Times, citing the reduction of crime and the highly publicized investigation with the Department of Justice.

Critics, however, accuse Diaz of contributing to controversial incidents within the police department. Incidents that occurred during Diaz’s time as chief include officer/victim confrontations that were caught on video, and the controversial fatal shooting of deaf wood-carver John T. Williams in 2010.

“We’ve gone through some challenges,” Diaz said at the conference. “I won’t stand here and say that every decision was right, but what I will say is that I tried to make every decision based on what I believed was right.”

Reactions to Diaz’s retirement have been mixed. Sgt. Rich O’Neill, president of the Seattle Police Officer’s Guild, and City Attorney Pete Holmes, both praise Diaz’s work, according to the Seattle Times. O’Neill specifically commends Diaz’s work in raising morale after the fatal shooting of Officer Timothy Brenton and for quickly catching Brenton’s killer.

Other reactions have not been so rosy. James Bible, the president of the Seattle-King County NAACP, has less than positive things to say about Diaz. He, and others like him, accuses Diaz of indifference toward officer misconduct.

As far as Seattle University is concerned, the change should not have an impact on Public Safety or campus policy.

“Our relationship with the SPD mostly depends on the East Precinct,” said Interim Executive Director of Public Safety Randy Carroll. “Our relationship is strong, and that’s not going to change.”

Carroll feels neutral about Diaz’s retirement, and didn’t notice any major changes in crime as a result of Diaz’s leadership style.

“We shy away from trying to take credit for [decreased crime] because if you interview any criminologist they’ll tell you that nobody could make sense of why crime does what it does,” the representative said. “Our strategies are pretty consistent, we try to maintain a high visibility…common sense would stand to reason that the presence of law enforcement will, in general, deter crime, but even something that simple nobody can prove.”

Regardless of whether Diaz has really made progress in decreasing crime rates in Seattle, students at Seattle U generally feel safe in areas around campus.

“I feel safe around Seattle,” said freshman Alex Golbek. “I’ve never had anything to deter me from
feeling safe.”

Other students feel similarly. Some mentioned that they know of places in Seattle to avoid, but apart from those areas, students feel safe around campus.

Regardless, many are ready for change within Seattle politics. Assistant Chief Jim Pugal has stepped in as Interim Chief until the new police chief is announced.

“This represents an opportunity for real institutional change and a chance to develop the sort of department we can all be proud of,” Bible said. “This could usher in a new era.”