Pike/Pine area could clean up its act 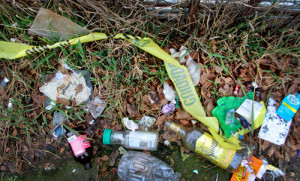 As the construction on Broadway winds down, the cleanliness appears to be going up.  Flower baskets hang from poles and for the most part, the sidewalks are well kept.  A few blocks over, the streets tell a different story.

In the Pike/Pine area, a grungy fog permeates the corridor.  Trash overflows from the dumpsters and the lighting is uneven and sometimes, nonexistent.

The reason for the difference in appearance between two streets in such close proximity is the presence of the Business Improvement Area (BIA).  BIAs exist for a number of reasons.  One very important one is keeping the streets clean and appealing to the eye; members of the BIA do this by removing graffiti, picking up trash, and installing aesthetically pleasing flower baskets.  Another more indirect reason is to stimulate commerce in the areas under which the BIA covers.  Having more welcoming streets invites consumers in and increases the appeal of the shops.

The Broadway BIA covers the Broadway area but excludes the Pike/Pine area.  However, this may change within the next year.  As more shops and restaurants move into this area, business owners in the region have been reaching out to the Capitol Hill Chamber of Commerce, the non-profit organization that manages the BIAs, to expand BIA services into the region.

“Pike/Pine is now a heavily trafficked retail corridor in a way that it wasn’t 30 years ago,” said Michael Wells, Executive Director of the Capitol Hill Chamber of Commerce.  “The businesses… there are services that the BIA provides that they would like to have for their businesses too.”

A couple concerns arise with the expansion of the Broadway BIA into this area.  Firstly, the atmosphere of the Broadway area and the Pike/Pine area differs immensely.  For example, a service that the BIA provides is removing posters from poles.  However, with the number of bars and performances spaces in that area, the posters seem to contribute to the culture of the area.

Michael Wells explains that BIA services provided for the Pike/Pine region will be specialized for that location.

Another concern that arises with the implementation of a BIA in this area is the financial stress on the businesses.  Each business that falls within the geography of a certain BIA pays a certain amount of money to the BIA that goes into a general pot.  Typically, the amount of money paid is based on either the business’s square footage or income.  For the Broadway BIA, businesses pay approximately .002% of their income tax.  A board of advisors, consisting of elected business owners representing the region, determines the allocation of the money in the common pot, like using it for clean and safe programs or sponsoring of events.

Although many businesses see this service as a beneficial investment, there are some institutions that would rather forego this cost.  Unfortunately, if one’s business is in the region of the BIA, it must participate in the program.

“There are always some folks that feel that they don’t want another bill,” said Wells.  “Small businesses, they’re working hard to keep up to speed when it comes to finances and they don’t want another bill in their mailbox.  Other businesses say, ‘I take care of these services myself so I don’t need your help.’  But what we find is that even if you’re taking care of your own services, your next door neighbor may not be.”

Wells himself, a former business owner of a bookstore on Broadway, found the services of the Broadway BIA helpful and worth the money.

“I never thought about it,” said Wells.  “It meant that I got daily street cleaning.  It meant that if I had human or bodily waste in front of my store in the morning then someone else would come clean it up.  If my building had been graffiti-ed I would call a phone number and someone else would come take care of that.  I thought it was well worth the dollars I was paying.”