This Just In: Seattle Times Says No to Free News 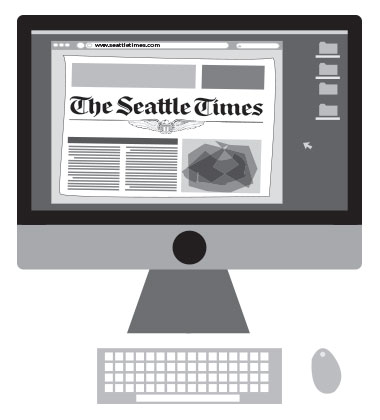 Illustration by Kelsey Cook • The Spectator

This March, Seattle residents will have to start paying up to receive their news online.

Over the past decade, many Americans have been taking advantage of the growing prevalence of online news sources. For customers, there’s nothing not to like about this online system. It’s less messy, more convenient and free.

But the cost-free aspect of online news might be disappearing sooner than anticipated. Like the people they serve, newspaper companies are catching on to the growing popularity of online sources, and many newspapers are now charging customers a subscription fee to access online articles.

The fee is not unreasonable, given that journalism, like any other business, requires profit to stay in business. According to a statement by Seattle Times executive editor David Boardman, The Seattle Times is soon to be one of 400 newspapers in the country that charges an online subscription fee. Boardman says that the change is not due to a decline in readership but rather a decline in the profitability of advertising, the paper’s main source of revenue.

The emergence of paywalls has brought the popularity of traditional newspapers into question. According to a recent Pew study, “The Internet is now the third most-popular news platform, behind local and national television news and ahead of national print newspapers, local print newspapers and radios.”

There are several possible explanations for this trend. Convenience is a major factor; online news sources allow patrons to easily filter news by subject, date and relevance. The growth in popularity of iPhones and other portable Internet sources also has a major impact on the way Americans keep up with the news. It is common, and often expected, that everyone is up to date on the latest events at any time of day. A daily paper cannot provide the same up-to-the-minute streaming that online news sources allow.

The popularity of online news sources might also be due to the social aspect of reading the news online. New websites invite readers to share their favorite articles by email or through public media.

Although the Seattle Times paywall reflects the growing prevalence of online journalism, it is also possible that the paywall could increase the popularity of traditional papers, since cost would no longer be a major factor in choosing between online and print news.

Regardless of where they are getting their news, staying up-to-date on the news has become a necessity for almost all Americans, especially college students who might get stuck in the “college bubble.”

“Now that I’m in college, it is harder to keep up on the news,” said freshman Emma Thordson. “I do try to read the paper at least once a week.”
Emma is one of many Seattle University students who takes advantage of the free Seattle Times Sunday paper offered around campus. Now that the Seattle Times is charging for its online paper, many students will be at a loss for finding legitimate news sources during the week.

The availability of news is an issue that the Student Government of Seattle University is working on solving. When asked about the Seattle Times, SGSU President Nicole Gaddie said that she’s been working on getting access to either the New York Times or the Seattle Times online since SGSU lost funding for hard copy newspapers last year.

“From what we saw last year, [the papers] were definitely being used every day,” said Gaddie.

If students want to see papers brought back to campus, whether online or in print, it’s up to the students to let SGSU know that this is an important issue.

“I think it’s always important for people who are entering the professional world to be updated on what’s going on,” said SGSU Freshman Class Representative Mallory Barnes. “Especially people who are just turning 18 and entering the voting population.”

“If they’re concerned about it, if they want to see papers brought back, email me, email our student government, and really voice those opinions,” Gaddie said. “If there’s a huge outcry, we could probably bring something by spring quarter. It really just depends on what the students want.”