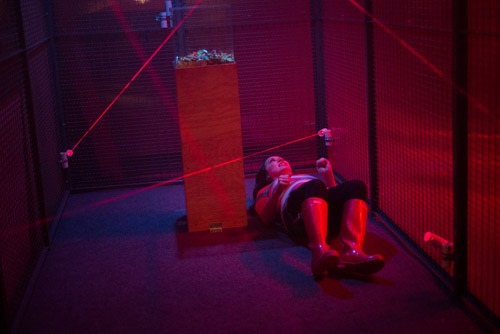 Smash Putt is not your average mini golf course.

“After a cross country road trip where Jeremy’s girlfriend forced him to stop at every mini golf course on the way, it dawned on him that miniature golf is boring and broken,” said McCracken.

Franklin-Ross and McCracken, with the help friends and collaborators, are in charge of generating ideas for and constructing the unique and challenging holes that makes Smash Putt the satisfying course that it is.

“We hang out, drink beer and talk crazy ideas,” McCracken said. “After lots of booze, some of them are manifested into reality.”

With a full bar inside, golfers can take on the two newest holes—they were added to the Smash Putt lineup this year—while enjoying a drink.

“We intended to have three [new holes] but the new two are so complicated and grandiose that we didn’t manage to make the third new hole,” McCracken said.

The Mission Impossib-hole is one of these two complex newbies. The golfer steps into a security room cage and has to putt their way to the hole without coming into contact with any of the laser beams obstructing the cage. If one of the lasers is touched, an alarm will sound and bright red flashing lights will go off, signifying that the mission has been terminated.

The Cold War Hole is the other new addition, but unfortunately it was not up and running on opening night. Smash Putt is no stranger to technological failure, particularly when it comes to designing holes as complicated as the Cold War Hole.

“[Our team] made a bad choice in technologies when pursuing the idea of this hole,” McCracken said. “The initial set up just didn’t work and we had to replace it.”

McCracken went on to explain that, at the Cold War Hole, each golfer interacts with an ‘80s-style computer terminal. The computer system taunts each group as they putt their way to the bomb shelter—putters sweat to make it to the shelter before a nuclear bomb lands on them and annihilates everything in its wake.

“There are a bunch of televisions showing Cold War-era movies and a little Joshua-style terminal from ‘War Games’ is taunting you,” McCracken said. “Each hole made signifies relieving global tensions. A bomb on the screen goes up and down, and eventually lands on the bunker, which means end of the world.”

A quirky scratch-and-sniff hole, named Stank Hole, starts when the golfer spins a wheel made up of eight scratch-and-sniff sheets. The golfer must smell the scent square selected when the wheel stops spinning, then putt the ball into the hole with the picture that best matches the smell. If the smell is matched correctly, the ball will drop and glide down a metal bridge into the final hole at the bottom.

Two holes involve the golfer putting into a glass case armed with charged power tools that push the ball around. At Tool Run, a saw winds the ball up—and usually leaves cuts all over it as well—and a power drill waits at the end of Deconstruction Zone, waiting to indent the golf ball with a screw.

This rare type of golf experience should be taken advantage of—it’s only available for a short while.