Critic’s Corner: ’21 and Over’ Underwhelms 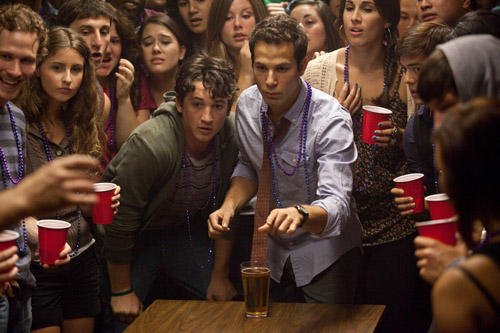 If this movie is any indication of what it means to be 21, then I’d rather stay 20.

In a series of insane decision after insane decision, “21 and Over” is a mashed-up chronicle of a horrific, never-ending 21 run that leaves the viewer feeling gross, shocked and irritated at spending 10 bucks for such crap.

On the day of his 21st birthday, Jim Chang (Justin Chon) is surprised by his high school best friends Casey (Skylar Astin) and Miller (Miles Teller).

The friends go out expecting a relatively mild evening that turns into a night of unfathomable debauchery–the friends take shots from the chubby folds of a middle-aged man’s belly flab, urinate on a room of people from a bar counter, and puke off of a mechanical bull.

All this in light of the fact that Chang has an important medical school interview at 7 a.m. the next morning.

Anticipated conflict arises when Chang absentmindedly throws a dart into the cheek of another student—a wife-beater clad, male cheerleader named Randy who eventually seeks revenge by punching Chang and smashing his stereo and laptop with a baseball bat.

Apparently 21st birthdays are packed with a lot of aggression.

The myriad of brightly colored alcoholic liquid proves to be too much for Chang, who passes out halfway through the movie. Casey and Miller then spend the next hour in search of his house. Lost and drunk, Miller and Casey are worthless navigators.

While looking for Chang’s house they break into a Latina sorority, release a buffalo and win numerous outrageous drinking games.

Despite the film’s glaring weaknesses, you could say there are sentimental moments in “21 and Over.” As the friends discover one another’s doubts about college and the future, your pained grimace at their constant stupidity might actually reside as you realize how much you can actually relate to these characters–especially since the majority of the film was shot on the University of Washington campus and in a number of Seattle bars.

But then Casey rips a glued teddy bear off of Chang’s penis and the grimace returns.

If you liked “The Hangover,” you’ll be happy with this mindless movie as well.

If anything, you can walk out of the theater relieved that even your worst nights didn’t end in being dropped out of a two-story window onto a van.