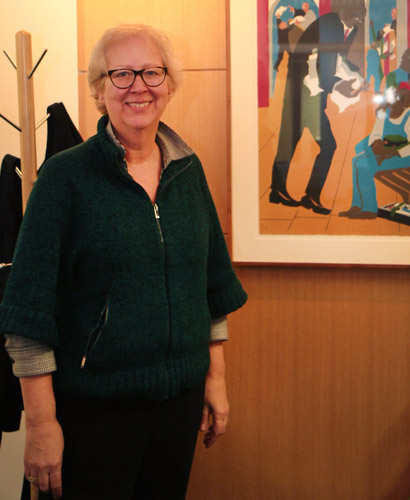 Working tirelessly for 35 years and dedicating her life to the advancement in civics education, Margaret Fisher has no intention of stopping any
time soon.

This entire time, Fisher, currently a Professor-in-Residence in the Seattle University School of Law, has inspired, improved and led an innovation in the field of civics education relating to the justice system. Because of her accomplishments, she recently received the Sandra Day O’Connor Award for the Advancement of Civics Education.

This award was named after a national hero and champion for civic education and the first woman justice on the U.S. Supreme Court. It is a national honor.

People in the field have noticed Fisher’s work, recommending her to receive the award.

One of the people who recommended Fisher is Washington State Chief Justice Barbara Madsen, who wrote in her recommendation letter, “It is the breadth of Ms. Fisher’s contributions to civics education that deserves special attention.”

Isidore Starr, a friend of Fisher’s and someone she calls “the father of this whole field” also wrote a recommendation for her, saying, “She is a woman of extraordinary energy, high intelligence, impressive organizational abilities, and creative imagination. She has brought all these qualities to her work in civic education.”

Fisher is one of the pioneers of street law. She began teaching it at Georgetown Law School, where her students went on to teach in prisons. She brought it to Seattle, where street law can be taught in the high schools.

Currently, she is serving her 60th semester as a professor at Seattle U.

Just last year, Fisher launched Seattle’s first and only Youth Court, where law students act as mentors for high school students to run court sessions for their peers who have violated traffic laws—a meaningful approach to having high school students think about how their actions impact those around them.

“I love what I do. I love to teach and that’s a role that I play, and it’s very important for me to help people see possibilities in their lives. That’s a motivation for me,” said Fisher. “Whatever circumstance people find themselves in, there’s something that brings out the ability or the desire, the motivation to develop skills, develop information, develop knowledge so that they can participate more fairly in the society we’re in.”

Her passion has inspired others to join her in the cause.

Bothell Municipal Court Judge Michelle Gehlsen started up a Youth Traffic Court in Bothell with the help of Fisher.

“Her work is inspiring. It inspires me,” said Gehlsen. “Her lifetime dedication and passion in educating our youth on civics to be better drivers, in training our future leaders makes our world a better place. That makes me want to help her in that cause.”

Fisher received an award last year for her work with the Youth Traffic Court.

“It takes a lot to coordinate all those people and get them to participate in the first place and coordinate the schedule to make it all work. She’s a brilliant educator as well as a community builder,” said Diane Douglas, the Executive Director for Seattle CityClub. Douglas presented Fisher with the award last year.

“A lot of people do a lot of unnoticed work to make the world a better place and so I feel very honored that I got selected to receive this,”
Fisher said.

Not only that, but who the award is named after holds significance for her. Sandra Day O’Connor experienced discrimination and was able to break that barrier in order to work in the Supreme Court. According to Fisher, it means a lot to receive an award named after such a woman.

At 62 years old, Fisher doesn’t see an end yet. She is currently planning how she will let her programs live on even after her she stops working.

“I know Margaret is older than me and the way that she works is exhausting to me. I don’t know how she keeps up with it,” Gehlsen said. “She’s tireless in this campaign and it’s been her life’s dedication and her life’s work, so I’m very, very happy she received the award.”

Others hope to see Fisher continue her work for many more years to come.

“I hope she continues going for 100 years and really serving as our conscious, as our instigator, as our leader and in the passionate way she talks directly to kids as well as to teachers and administrators and to public officials,” Douglas said, who also called Fisher a treasure and pride for Washington state.

Luckily for them, Fisher said that perhaps when she is 120 years old, she would be ready to step down.