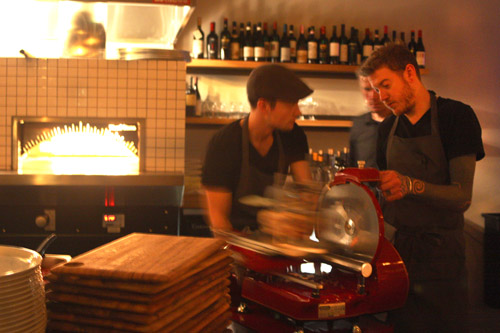 Adorned with polished concrete floors, sporadically placed candles and modern wiry pendant lights, Bar Cotto, Capitol Hill’s newest salumeria and bar, epitomizes the classic Seattle hipster vibe. An enthusiastic hostess with wide-rimmed glasses seated me as Passion Pit played on in the background. Prominently placed between the tables and bar, the chef showed off his meat slicing skills, which provided customers with an authentic experience of a salumeria. And an experience is exactly what Bar Cotto has to offer.

Despite the menu’s brevity, a night here is one full of meat boards, bruschetta and wood-fired pizzas. Customers who were seated when I arrived remained snacking, chatting and sipping wine two hours later.

With the menu consisting primarily of meat, what more could a carnivore want? Ever? The meats were simply and elegantly delivered on basic stained-wood cutting boards, accompanied by small pockets of gently fried dough—take the concept of Tostino’s Pizza Rolls and upgrade it. I was sold. One could be content without even looking at the remainder of the menu.

At seven dollars per selection, the prices were fairly steep for a mere college student. However, pricing qualms did not stop me from ordering a wood-fired pizza, which are visibly made in the kitchen that is partially incorporated into the restaurant itself. The crust bubbled, cheese was in perfect proportion to the dough and toppings were fresh. The reasonably priced happy hour menu provides half-off pizzas, meaning I paid the same amount of money I might have for a Papa John’s pie, but was served the quality of something straight from Parma. I reiterate: this is a great deal.

But, some critics disagree with its perfection. Stowell has received several prestigious titles such as “Best New Chef in America” and “Rising Star Seattle Restaurateur.” With numerous other Stowell restaurants complementing Bar Cotto on 15th Ave., he has other establishments in the greater Seattle area as well. According to some critics, each share similar, if not identical, traits with respect to menu, atmosphere and general layout. However, Seattle Weeklyfood critic Hanna Raskin wrote, “I don’t begrudge Stowell for doing the same thing six times—although I am looking forward to the day when he tinkers with the formula.”

Although I agree that the layouts are nearly all the same, and menus relatively alike, I disagree with the negative criticisms of Stowell’s establishments. Though it may be my love for meat or fondness of music that might be the catalyst for this opinion, Bar Cotto remains one of a kind in my book. Humans crave consistency after all.

In an interview with Stowell, I was informed that the familiarity in atmosphere that transfers from restaurant to restaurant is very much on purpose.

Stowell emphasized his desire to cultivate a tight-knit group of customers so that he may develop relationships with loyal clientele. When asked why most of his restaurants occupy Capitol Hill as opposed to downtown, he reiterated his desire to truly know his customers.

“To be honest, I had too many tourists [downtown]. We really want to provide that family atmosphere,” Stowell said.

Upon initially arriving at Bar Cotto, I did not experience that family vibe. However, as time passed, multiple families trickled in, dates departed and the place was filled with the friendly neighborhood laughter Stowell had described. One elderly couple wandered in and were promptly greeted by the hostess with, “Back again already?”

Bar Cotto serves food with quality unparalleled to anywhere else I have dined on Capitol Hill, in addition to perfectly fulfilling Stowell’s mission.

To critics who claim Seattle is in no need of more Ethan Stowell restaurants, I give this advice: take a look at the number of Starbucks that fill our city. One should be given as many opportunities to experience Stowell’s handmade sausage as they are mediocre, overpriced lattes.