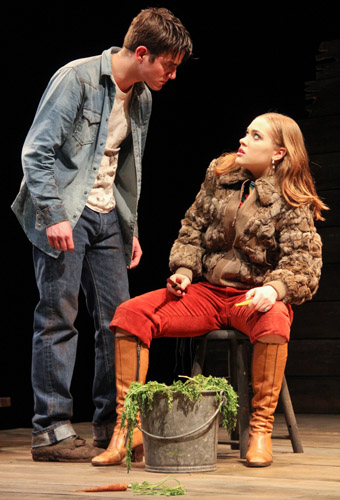 Viewers will likely experience lingering astonishment and bewilderment after viewing “Buried Child,” the Seattle University theater department’s production at the Lee Center for the Arts. Sam Shepard’s Pulitzer Prize-winning drama breaks down many family stereotypes through the depiction of an ultra-dysfunctional 1970s Illinois family.

The story centers on Vince (Lucas Kiehn-Thilman) who, on his way to New Mexico, makes a stop in Illinois with his girlfriend Shelly (Emma Bjornson) to visit his family. At first, Shelly is charmed by the family’s quaint country farmhouse, but she soon discovers that the people who occupy the home are anything but charming. The family doesn’t remember Vince at all. Shelly becomes the anchor to reality for the audience as she guides the audience toward learning the truth about Vince’s strange family.

The family’s dynamic is strained and filled with obstacles to overcome—patriarch Dodge (Sam Asher) is feeble and sick, matriarch Halie (Meme Garcia-Cosgrove) is no stranger to extramarital affairs, Tilden (Jacob Swanson) seems to be mentally handicapped and Bradley (Matthew Weingarten) has abusive tendencies. But as the play progresses, the audience learns these character traits are rooted in secret events of incest and murder that have left all of the family members broken and shaken to the core.

“Buried Child” is a roller coaster ride of emotions and tough real-life situations.

The productions makes the audience members feel like they are meeting the family alongside Shelly, trying to figure out who they can trust from the very onset of the play. Shepard provides hints about each character’s back-story, but he lets the audience form their own conclusions. He uses this technique even in the play’s ending—many puzzled faces exited the Lee Center as the audience retrospectively tried to piece together the mesh of scenarios that occurred between the plot’s climax and its conclusion.

“Buried Child” forces the audience to grapple with some tough overarching issues.

“Three decades after its premiere, the way this play tears apart our comfort in family is still devastating,” said Director Rosa Joshi in the program’s Director’s Note.

Each actor did a commendable job drawing out their character’s true essence as the play developed—the audience can feel the emotional burden of the family’s struggles as the nature of each character is revealed.

The main themes the play hopes to address connect directly with the characters’ personalities.

At the beginning of the play, there’s a sense of apathy for the ineffectual Dodge. Asher expertly demonstrates Dodge’s helplessness in his performance—he is bullied by his wife and children and thus becomes continually disempowered by their actions.

In his low state, Dodge’s depression has made him unwilling to maintain his crops. When Dodge does not step up to work the farm and leaves his fields unplanted for 12 years, he breaks the traditional family hierarchy and forsakes the role of breadwinner.

The female characters in “Buried Child” are the ones with the authoritative upper hand. Garcia-Cosgrove shows that the moody Halie resorts to bossy measures in order to keep her family in line, which marks her as head of the household. Bjornson keeps Shelly strong through her unwillingness to be ignored. Both women leave the men in an emasculated state.

Dodge’s and Halie’s children, Tilden and Bradley, represent the theme of the disillusionment with the “American Dream.” Both are supposed to care for their parents in their old age, but are unable to effectively do so because of Tilden’s emotional handicap and Bradley’s physical one (he lost a leg in a chainsaw accident).

The characters’ frustrations with this universal ideal—a standard that many people still struggle with today while trying to achieve what America has deemed social and professional success—is something that college students can easily relate to. Students will soon have to wrestle with the “American Dream” as they enter the workforce.

Weingarten gave Bradley’s aggressive attitude the necessary oomph to make him feared. As Tilden, Swanson’s remarkable performance stuck out the most, as he brought to life the complexities of his character. There is much more to Tilden than initially meets the eye.

After watching this play, I felt like I knew this family in real life and had known them for years on end. Because of this, the emotions of the play have stuck with me ever since I left the theater.