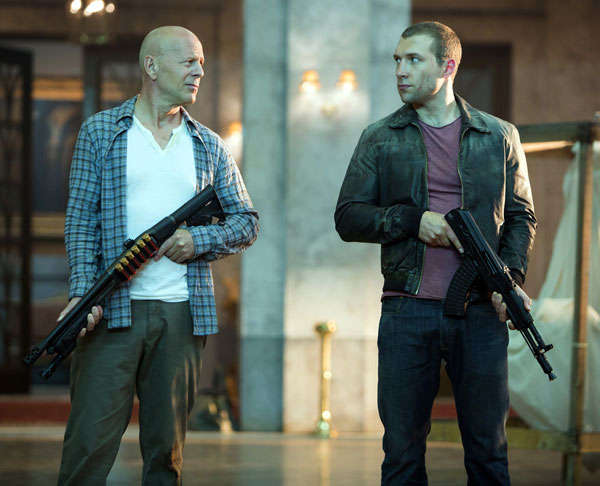 The legendary John McClane (Bruce Willis) goes to Russia to help his son Jack (Jai Courtney) get out of prison. If this wasn’t challenging enough, McClane soon becomes caught up in a terrorist plot.

The film opens with a simple black screen and the booming noises of violence and guns, drawing the audience into the middle of the action right from the get-go. As the opening credits fill the screen, rapid Russian and criminal activity explain that the government is searching for some sort of secret file that will incriminate Chagarin, a powerful Russian criminal. A classic opening premise that leaves the audience intrigued and eager for the plot before cutting to the anticipated hero, John.

Turns out John’s son, Jack was arrested because the Russian police are hoping to find his mob boss, and Jack agrees to testify for a shorter sentence. Immediately the action picks up as ominous black cars pull up next to the court house, and before you know it family members are pulling guns on one another. It looks like John’s attempted rescue only complicated the already confusing turn of events involving the Russian criminal Chagarin.

The cheesy action dialogue doesn’t take long to kick in, and the audience gets the pleasure of seeing Bruce Willis pull a catch phrase, say the famous “Yippee ki-yay mother f*cker” and bitch-slap a random, large Russian guy.

The film is very fast-paced right off the bat, which is great for the action scenes, but makes understanding the premise difficult. The over-the-top car flips and crashes can get repetitive and boring at times, and even muddles some of the sequences. During these sequences, very little is creatively done with the camera.

There are only a couple minutes of plot and dialogue between each heroic action scene, and each elaborate sequence is conducted in the “spur of the moment” with little planning and stroke upon stroke of random genius. The character Jack literally says, “I thought we’d go in guns a’ blazing and make sh*t up as we go.”

However, writer Skip Woods worked well with the script to provide multiple plot twists and good conditions for these action scenes, such as Jack and John escaping pursuit down a construction tunnel on a high-rise building.

The plot often cuts from high adrenaline action scenes to scenes featuring comedic tension and “touchy-feely” dialogue between John, Jack and even the notorious file carrier Yuri Komarov (Sebastian Koch). The movie’s greatest strengths were its plot twists—watching characters reveal who they are really working for and their motives. Although it is certainly a standard action flick, the film’s ending plot twists and Bruce Willis’s legendary performance make it worthwhile.

If you like high intensity, testosterone-stirring, “manly” films, “A Good Day to Die Hard” is definitely the movie for you. The hyper-masculine father-son duo at the center of the film spend a lot of the time having pissing contests, pulling bullets out of their guts, jumping out of burning buildings and stealing cars.