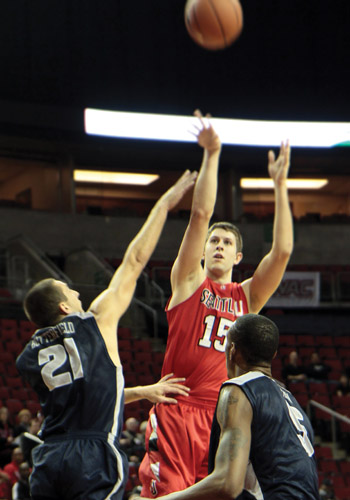 Photo by Trevor Umbinetti • The Spectator

Basketball can be a very fickle sport. Some nights, despite your best intentions, the ball just doesn’t seem to find its way through the basket. Some nights it’s from the free throw line, some from outside, and others, well, sometimes you just can’t make it from anywhere.

The Seattle U men’s basketball team suffered at the hands of that very type of night this past Saturday against visiting Utah State, losing to the Aggies 68-46 at KeyArena. The absence of forward DeShaun Sunderhaus played a part, as the 10.1 point-per-game man sat on the bench with an ankle injury picked up against San Jose State on Thursday.

The absence wasn’t felt early on, as center Louis Green and forward T.J. Diop both started the game well, but soon cooled off, only scoring six and four points respectively, eight of which came in the second half. The pair helped to give the Redhawks an early lead, before a 14-3 Utah State run took the game to 22-13 with 7:10 to play in the half.

Guards Jarell Flora and Prince Obasi combined to cut the lead to five, but an 8-2 run to end the half saw the Aggies carry an 11 point lead into the break.

The second half saw the Redhawks’ shootings drop to 29.4 percent from the field, as Utah State found their stroke on the other end, making 56.5 percent of their shots, taking their percentage to 47.2 for the game, compared to just 31 percent for the Redhawks.

“Well [it was] obviously disappointing, the way that we played, but give credit to Utah State,” said Head Coach Cameron Dollar. “I thought we had some looks, early on I thought we rushed some looks, weren’t as patient as we needed to be. Just a tough go all around.”

Despite the poor shooting, the Redhawks were strong in other aspects of the game, only committing 10 turnovers, compared to 17 for the Aggies.

Their control of the ball allowed them to take more shots from the field, putting up 58 to the Aggies 53. The Aggies made no mistake of their chances, however, and were able to cruise to a comfortable win, dominating the Redhawks on the scoreboard and the stat sheet.

“We just couldn’t get it going offensively,” said Flora. “We forced shots, we didn’t drive and we didn’t play smart overall.”

Forward Chad Rasmussen looked to pick up the slack for the Redhawks, taking 10 shots from the field, but was unable to find his stroke, ending up 2-10 from the field, including just 1-7 from behind the line. He wasn’t the only one on a night where it seemed as if the basket had shrunk. Flora was the second highest scorer for the Hawks, notching 8 on 4-11 from the field. Forward Clarence Trent, the team’s leading scorer, pitched in six in 22 minutes.

When asked about whether they could do much to overcome the tough shooting, Flora said, “Not really. Just keep at it and hopefully everything comes in to place. Just gotta keep at it and start back on Monday at practice.”

The basketball team looks to finish the season strong heading into the WAC Tournament, with eight more games to build momentum, including two at home. Next action sees the Redhawks travel to Denver to play the Pioneers, before a chance to redeem their double overtime loss to New Mexico State.

Kevin may be contacted at [email protected]