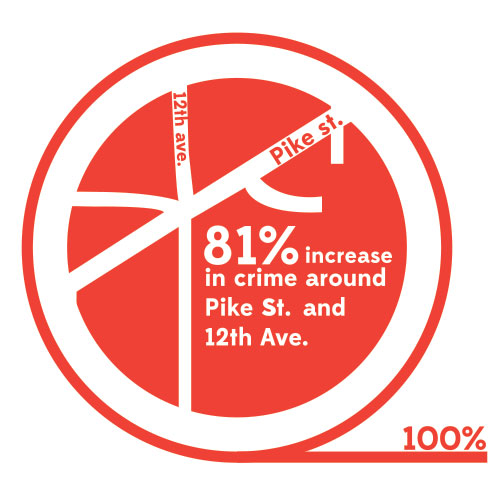 If it seems like the number of Timely Warning Notifications has been increasing over the last few months, you might be right.

Many of the reported incidents involved guns or the threat of gun violence.

KIRO TV and CHS have reported on the increase in crime and Social Outreach Seattle, a LGBTQ community group has been vocal in their concerns over the perceived increase.

As spokesperson Daniel Hanks told CHS, “I want to be clear about something and that is: Any attack, mugging or worse should not be tolerated by members of the LGBTQ and Allied communities. Why are these criminals coming to the Hill to commit these crimes? I don’t think it is too far-fetched to say it is because they think the gays would be an easy target. I’m not saying that these crimes, on the individual basis, motivated by homophobia. Conversely, I’m not willing to say that they are all circumstantial to the fact that the economy is bad or that new condos have moved more straight people to the Hill?”

While the SPD does not keep detailed records of crimes involving firearms, the City Council has created a committee to increase gun control laws in light of the Sandy Hook shooting.

Many of the most recently reported crimes involve reports of gun violence. With the recent shooting at the Harvard Exit, and reports of a drug deal gone bad at 10th Ave. and Madison Street, many reports, according to CHS, involve the use of a weapon or the threat of gun violence.

There will be a candlelight march on Feb. 9 beginning at St. Mark’s Cathedral to bring attention to improved gun laws, and the Twilight Exit will be holding a fundraiser for the bouncer shot during the Jan. 28 incident that left the gunman dead.

On Capitol Hill specifically, in 2012 there were 542 assaults, 97 robberies, 536 burglaries, 1,703 thefts and 292 car thefts. The area in the East Precinct bordered by Madison and Broadway saw an increase in reported crimes in all of the above categories. While CHS has only predicted the over 80 percent jump in burglaries in the area, the number of burglaries is up in almost all neighborhoods in the East Precinct. However, on the far northern end of Capitol Hill, bordered by 23rd Ave. and Roy. Street crime reports are mostly lower than in 2011.

According to CHS, there was one homicide reported on Capitol Hill last January that remains unsolved.

Crime data for 2012 is not available for Seattle University yet, though statistics for 2011 are almost negligible. There was one reported forcible sexual offense, one reported robbery, three burglaries and six motor vehicle thefts, in terms of criminal offense on campus according to Public Safety. In on campus student housing, there was one reported forcible sex offense and one reported burglary. There were no reports of murder, negligent manslaughter, non-forcible sex offenses, aggravated assaults or arson. There were two reported hate crimes categorized as sexual orientation bias during 2011. Two cases of weapons violations were reported, as well as 60 drug abuse violations, and 278 liquor law violations in 2011.

Under federal law and as a result of receiving federal financial aid, the university must compile an annual report, which discloses information about crime on and near campus. The Jeanne Clery Disclosure of Campus Security Policy and Campus Crime Statistics Act, known as the Clery Act, is monitored by the U.S. Department of Education which can charge campuses up to $27,000 per violation of the act. Several campuses have been fined for failing to report offenses.

Olivia may be reached at [email protected]