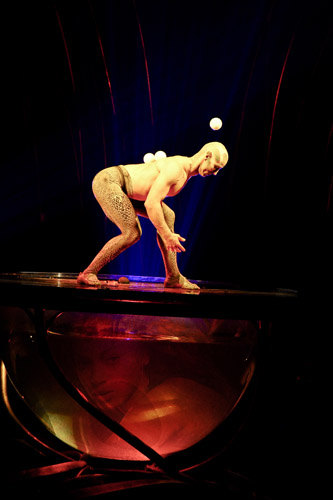 With a 70 percent female cast and an all female band, Cirque du Soleil’s latest production, “Amaluna” purports to be an ode to the feminine. Set on an island of female goddess worshippers governed by a queen, the show lacks nothing in the way of gorgeous costuming, breathtaking stunts, and phenomenal performers. The incredible strength, agility and skill of the female performers was breathtaking, moving and empowering to watch. There were also a number of male performers who were equally captivating and complemented the predominantly female cast nicely.

If left to my own devices, I would have been content to admire the talent of the trapeze artists, jugglers, tightrope walkers and gymnasts, untroubled by the narrative content of the performance. Nevertheless, the show did follow a cliche storyline, albeit a somewhat obscured one until I read the program at intermission.

Something of a bastardization of Shakespeare’s “The Tempest,” the show is essentially a story of star-crossed lovers. Miranda is the female lead who falls in love with Romeo (not sure why they didn’t stick with just one Shakespeare play), a sailor who is shipwrecked on the island along with his captain and the rest of the crew. Something of a love triangle emerges; however, as it eventually becomes clear that Miranda’s half-lizard, half-man pet named Cali (Caliban) is in love with her as well. This is a little confusing because for the first half of the show it seemed like he really was her pet—they play fetch together—not a potential suitor. Regardless, Miranda and Romeo fall in love, but encounter many obstacles along the way, including the disapproval the Queen, Miranda’s mother, and the ire of her pet/suitor Cali who at one point kidnaps Romeo.

Lizard dude aside, there’s really no reason to fuss about a lack of narrative continuity or sophistication at the circus—the acts themselves were enough to make it worth the trip. However, the story failed to live up to the mission and value of the production. By the end of the show, all the characters are coupled up into monogamous, heterosexual, romantic units.

Rather than self-actualize or self-explore or pick a remotely interesting partner, Miranda predictably ends up with the beefy but boring Romeo. Though Romeo did look freakishly similar to Channing Tatum, which was enough to keep me mildly invested in his inert presence on stage, the circus Casanova does nothing other than follow Miranda around for the duration of the performance. Meanwhile the cool, quirky, insanely talented lizard/man just fades into the background.

None of this would be much of a problem if the whole thing hadn’t been marketed as very woman-centric. It really detracted from the whole girl power thing to have the story line and dénouement feel like a cliché romantic comedy.

That said, I’m not totally sure how central narrative usually is to a successful circus. Perhaps it’s standard practice to cobble together a semi-coherent, politically problematic, quasi-Shakespearean storyline that doesn’t outshine the acrobatics and stunning costumes. If it is, I guess I’d have to conclude that there’s nothing wrong with “Amaluna.” The performance was so indescribably fantastic I would see it again in a heartbeat and highly recommend to anyone who has the opportunity to go.

But it would be cool if Cirque du Soleil actually played with gender roles in one of their productions.

It would also be incredibly cool if they put together a production that was focused completely on men. The lizard/man Cali was a completely fascinating, unique male character. He was definitely heavily influenced by Caliban and the whole noble savage thing, but he also had a really interesting way of holding himself and interpreting his role. An entire production could have been built off of his character, but instead he was sidelined for boring old Romeo.

I’m sure we can expect more great things from Cirque du Soleil and my having been irked by gender roles in “Amaluna” should in no way constitute a sweeping criticism of the production. I look forward to seeing what they come up with next and hope they will incorporate more nuance and sophisticated story lines into their future work.