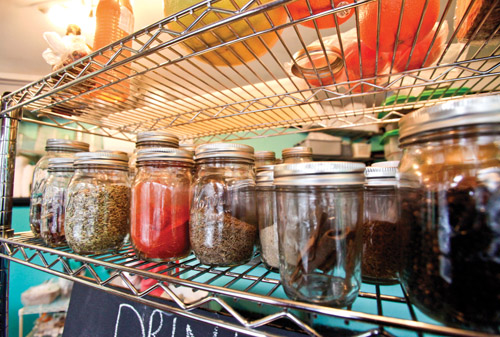 Admit it: a mid-level Capitol Hill eatery is more or less doomed to failure unless it has some serious drunk-food potential.

Call it our dark side. Even Birkenstock-wearing, left-leaning vegan denizens of the Hill sure as hell aren’t clamoring for salads when the sun goes down. What would the neighborhood be without its intoxicating twilight perma-scent of street meat, Dick’s Drive-In and fish fry?

Though tacos will, of course, always be welcome, Kedai Makan’s arrival is a change for the better. Thanks to co-owners Kevin Burzell and Alysson Wilson and their partner Kathleen Khoo, the entire block now smells deliciously of Malaysian food—a smell that I didn’t even know I enjoyed.

“We went on a trip to Malaysia, and we loved it…loved the food, loved everything,” said Burzell. “I loved how diverse [the food] was.”

Malaysia’s large immigrant population gives its cuisine an eclectic feel—think of the best parts of Chinese, Indian, and Southeast Asian cuisine coming together in unexpected harmony.

In spite of the local popularity of Vietnamese and Thai food, most Seattleites are relatively unfamiliar with Malaysian cuisine.

“People have been surprised by the flavors, like ‘What is this?’” said Khoo, who is of Malaysian descent. “But we find that most people are willing to try it… Seattle foodies are adventurous, so I think Malaysian food will actually take off here.”

If Kedai Makan’s first few days are any indication, Khoo’s prediction was spot-on.

“It’s been very well-received,” Burzell said of the new storefront. “It’s been busy.”

Fair warning: Kedai Makan is not a full-service restaurant. Be prepared to take your order and walk—I was not. But the food that came up fast, fresh and piping hot from Kedai Makan’s minuscule kitchen was worth the logistical hiccup.

I tried the char siu rice, ngau lam fan and kacang putih. Confused? So was I.

In lieu of deciphering the menu, I asked Wilson to put me down for an order of whatever she thought was delicious. I’d advise other perplexed patrons to do the same because I was far from disappointed.

The char siu rice consisted of white rice topped with big, delicious chunks of barbecue pork and crisp, lightly pickled cucumbers. Ngau lam fan, the most unfamiliar dish I received, was a delightfully surprising tangle of richly seasoned noodles and meat and who-knows-what-else. Kacang Putih is a general Malaysian term for crisp snacks, often sold as street food. Kedai Makan’s was a melange of peanuts, spices and other indistinguishable yet tasty morsels, slightly reminiscent of your typical bar snack mix.

My first reaction to the meal: I have no idea what I’m eating.

My second: But I really don’t want to stop eating it.

All the flavors and textures were pleasantly cohesive. However, some tastes were so strong and unfamiliar that I could only handle them in small doses—I hardly made a dent in the Kacang Putih, though the bit I had was delicious.

The three dishes, which were perfect to share between two people, ran me $20. By no means the cheapest late-night bite on the Hill, but perfectly manageable for the average student.

My main complaint about Kedai Makan was its relative distance from Seattle U. As I ate, I found myself wishing that Burzell and Wilson could have had the courtesy and foresight to set up their storefront, say, in the Student Center. However, I don’t see the walk being too much of a deterrent for hungry Redhawks, at least as long as Kedai Makan has the Malaysian restaurant niche cornered.

Given its immediate success, it might not be the only option for long.