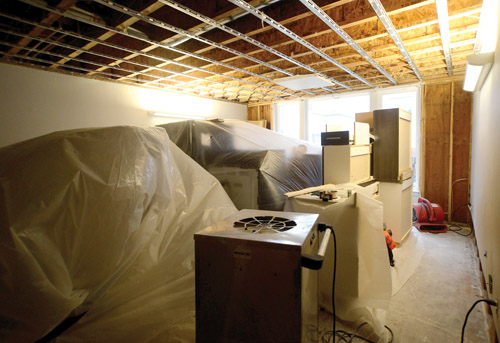 Peter Guilherme came back from class on Thursday last week to find that a small flood had taken over his floor in the Douglas. The carpeting in the halls were saturated with water and it was leaking into the entryway of his apartment. The damage to his neighbors’ apartment was even worse.

Soon emails were sent out, alerting the Douglas residents to the situation. Guilherme turned off the power in his unit as a safety precaution and by 1:30 p.m. the water supply to the entire building had been turned off.

According to the Asset Manager for the LLC that owns the Douglas, Amy Worthington, the flooding was due to a leak in the supply line.

Property Restoration technician Gregory Hug, however, was able to explain further. Hug is in charge of the team tasked with drying out the affected areas and removing those elements of the interior structure that cannot be salvaged. According to Hug, the problems began with an elbow section of piping above apartment 421. The elbow section was poorly joined due to a faulty glue job and began to leak. Water accumulated above the ceiling of apartment 421 and made its way down the sidewalls through gaps in the studs. Eventually the water reached a critical mass above apartment 421 and broke through, while the water in the walls and from the floor of 421 began to leak into apartment 321.

Hug says that his team will be dealing with the damage for at least another week before remodeling can begin.

Worthington, however, wasn’t able to give a clear timeline for long-term repairs.

“Until we understand the full extent of it we won’t be able to put a schedule together,” Worthington said.

But for Guilherme, that’s not such a big deal at this point. The whole building was talking about the damage at first, said Guilherme, but now everyone has mostly gotten used to the situation and talk starts up again when new fans or dehumidifiers get brought in, or someone new has their carpeting or linoleum ripped up.

“We don’t have to move anything or really change our routine that much, except maybe remembering not to trip over the fan at night,” said Guilherme.

But that’s not the case for the residents in apartments 321 and 421. Apartment 321 is completely gutted and the residents have had to move out. Apartment 421 was not available for inspection as The Spectator went to press, but Hug’s assessment indicates that the damage is equally severe.
Worthington was not sure of the full extent of the damage or how many students were affected.

Guilherme says there’s been no mention of compensating students for the inconvenience, but that doesn’t bother him since there wasn’t extensive damage to his apartment. He did say, however, that he thought the students whose apartments had been destroyed by the water damage should be compensated, adding that he thought they would be.

As for who will be paying for the repairs, that also remains unclear. Often a general contracting or development company guarantees the integrity of a building for the first few years and is responsible for any problems that should arise.

According to Worthington, however, the issue of who is responsible for the bill has not been settled yet.
“It’s still to early too talk in detail about everything that has happened and who’s paying for what,” Worthington said.